The British Rail Dieselisation Programme: The Type 3s Content from the guide to life, the universe and everything 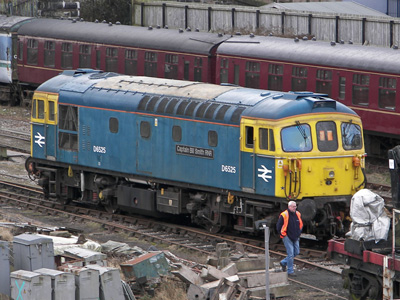 In the late 1960s, when British Railways adopted TOPS – Total Operations Processing System, a computerised system to handle all their traffic – all existing locomotives were grouped into 'Types' according to their specified traction effort or pulling power, expressed in horsepower (hp). Within each type, the locomotives were then sub-divided into classes, each class representing a particular design.

The Type 3 diesels, being powerful, and capable of both heavy freight and express passenger workings were the internal combustion equivalent of one of the most ubiquitous type of steam locomotive – the mixed-traffic Class 5. By end of steam, there were well over 1,000 of this class of locomotive. Charles Collett of the Great Western Railway (GWR) built his Hall Class locomotive, a medium-power locomotive that was equally at home with both freight and passenger trains. He also made the similar, but smaller Grange and Manor locomotives. The Hall Class was copied by the London Midland and Scottish (LMS) to become the 'Black Five' and by the London and North Eastern LNER) to become their B1. The British Railways Standard 5 was based on the Black 5, and there was a slightly lighter Standard 4.

Generating 1,550bhp, the all-steel-bodied Class 33s, built by the Birmingham Railway Carriage and Wagon Company, only just fitted into the Type 3 classification. They were known as BRCW Type 3s or as 'Cromptons' after the makers of their electrical equipment. Power came from a Sulzer eight cylinder engine. They were 50ft (15m) long, weighed between 73 and 77 tons and had a rounded front with three windows.

Between 1960 and 1962, 98 of the class were built, seeing service mainly in the Southern Region. The locomotives were built to work the newer electrically heated passenger carriages, however most stock at the time of their introduction was steam heated. This meant that locomotives with steam boilers also had to be coupled onto the train during winter. Often this was a Class 24, which always had to be on the inside of the pair to allow their heating pipes to join, leading to complex manoeuvres at termini.

Nineteen of the locomotives were fitted with control equipment allowing them to work in conjunction with sets of unpowered multiple units on the Weymouth Line. The Southern Region's third rail electrification project of the route from London stopped at Bournemouth, but services continued on to Weymouth. These were formed by two sets of four-car unpowered units and one very powerful four-car set. The powered set was at the London end and provided power for the train to Bournemouth, with the unit on the front having a cab to drive the train. At Bournemouth the powered unit was taken off the back and a Class 33 added to the front to haul the remaining eight cars to Weymouth. On the way back, the Class 33 pushed the train to Bournemouth where it was reconnected to a powered unit to take it to London. The Class 33s used in push-pull operations were classified as Class 33/1. They also saw service on other lines including that from Waterloo to Salisbury.

One of the most troublesome routes on the Southern Region for rolling stock was the Hastings Line. It featured a lot of tunnels in which the original contractor had helpfully not used enough bricks. When one of these tunnels collapsed, they all had to be relined using extra rows of bricks, reducing the width of the tunnel, meaning that normal rolling stock couldn't use it. Twelve Class 33/2s were made with a thinner body to allow them to operate on the line. It is suggested that the extra cost attributed to building such a small run hastened the demise of BRCW.

Many of the Class 33s went into locomotive hire in recognition of their generally reliable service, and 24 have made it to preservation.

The Class 35s were the medium-powered locomotives introduced on the Western Region under their trial of hydraulic transmission. Its transmission was a Mekydro-design unit, which gave the class the nickname the Hymeks. Beyer, Peacock and Company of Manchester built 101 of the locomotives between 1961 and 1964. They used a Bristol Siddeley version of the Maybach 86-litre MD870 engine which produced 1,700 bhp. At only 75 tons, the locomotives were both light and powerful, the most powerful single-engine diesel-hydraulic. They had a B-B wheel arrangement.

The 51ft (15.5m) locomotives had a relatively simple, sleek modern design. The front had two large windows, slightly swept back at the top while the front was also slightly swept in at the bottom. For most of their working lives they carried a two-tone green livery, mostly dark green with a lighter green along the bottom of its flanks and at either end. The fronts also carried a yellow warning patch.

They were assigned to the Western Region depots in London, Bristol and Cardiff. Originally they were given the secondary passenger and semi-fast services. They then took over from the mighty King Class steam locomotives on the express trains from London to Wales, although they lost this duty when larger, more powerful locomotives became available. Their duties also consisted of freight and banking1

Although the Hymeks were successful in service, cost-cutting meant that the diesel-hydraulics of the Western region were amongst the first locomotives to be phased out. Hymeks were replaced by Class 37 locomotives between 1971 and 1975, although a number remain in preservation. The locomotive Bear in the Thomas the Tank Engine books was a Hymek.

The Class 37 has been one of the most familiar sights on the railways for over fifty years. Between 1960 and 1965, 309 of these Co-Co diesel-electrics were produced, with many still in service well into the 21st Century. Known as 'Growlers' or 'Tractors', these were built by English Electric and used a 1,750hp English Electric 12CSVT engine.

The locomotive is 61ft (18.6m) long, with a characteristic large snout on either end. The ends of the snouts differ within the class, the first 119 having a headcode boxes on either side and horns in the snout, the others having a large box in the middle and horns on the roof. The standard locomotive weighs around 100 tons, and is capable of 90mph.

The Class 37s were used all over the network for a wide variety of tasks, both passenger and freight. Their main passenger duties started out as the Great Eastern expresses to Norwich, but later on went to include cross-country services and work on the highland lines in Scotland. These Scottish workings saw some of the steam-heating fitted stock displace the smaller Class 26 and Class 27 locomotives. Eventually electrically heated coaches were introduced onto the line, which meant that the Class 37s had to run with a Class 25 behind it to provide the heating2.

Thanks to their reliability and sterling performance, the Class 37s managed to stay in service well into the 21st Century, remaining in regular use on the rail network. With the arrival of newer Diesel Multiple Units, their cross-country duties have been lost and tend only to be seen on freight workings in regular service. They are often used for special excursions, both as the main train locomotive or on the back of steam excursions to provide assistance if needed.

Despite their continued success, many were withdrawn from service. A lot of these found their way into preservation. As well as being cheap and powerful, the vast number of them around means that spare parts are readily available. Many preserved railways have fleets of Class 37s in a wide variety of liveries.

The class was split into a number of subclasses:

1Helping heavy trains get up steep gradients like the Lickey Incline in the Midlands.2These Class 25s had their traction motors isolated so couldn't be used to pull the train, and were known as ETHELs (Electric Train Heating Ex-Locomotive).