The British Rail Dieselisation Programme: The Type 1s Content from the guide to life, the universe and everything 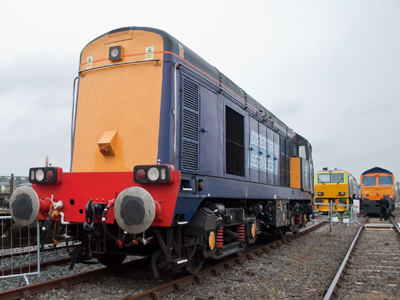 In the late 1960s, when British Railways adopted TOPS – Total Operations Processing System, a computerised system to handle all their traffic – all existing locomotives were grouped into 'Types' according to their specified traction effort or pulling power, expressed in horsepower (hp). Within each Type, the locomotives were then sub-divided into Classes, each class representing a particular design.

The Type 1s were the lightest locomotives that regularly hauled trains on the main line. Being small, light and not especially powerful made them suited for replacing the smaller steam locomotives on local passenger services and pick-up freight trips. However most local passenger services were to be run by diesel multiple units, which were lighter, cheaper and only the driver needed to change ends at the terminus, not the whole locomotive.

Being relatively small and light, Type 1 locomotives tended to have only one cab. Different manufacturers took different approaches to placement of the cab, but forward vision in at least one direction was always going to be poor.

With the loss of local freight traffic to the roads, the raison-d'être of these classes of locomotive was lost, leading to many of them ending up on the scrap heap sooner than envisaged, unable to cope with the heavier loads of bulk freight.

Ten Class 15s were built for evaluation by The Yorkshire Engine Company to a design by British Thomson-Houston in 1957 and 1958. A further 34 were built by Clayton Equipment. Known as the BHT Type-1, they were intended for moving empty coaches and for light freight work.

Tipping the scales at nearly 70 tons, they had a slightly American look to them by featuring an off-centre cab. One end had a long, full-height nose, the other end had a shorter nose. This led to neither end of the cab having good visibility, since at each end, they had a large amount of nose blocking their view. However, even the view along the long nose was no worse than that of a steam engine.

The Class 15 was powered by a 800hp Paxman engine, giving it a top speed of 60mph when not hampered by reliability issues. It didn't have coupled wheels, instead this diesel electric had a Bo-Bo layout1. The articulation of the bogies allowed it to negotiate tighter curves.

After evaluation, they were based at the Eastern Region's Stratford, Finsbury Park and Ipswich depots. However they were soon surplus to requirements and were withdrawn by 1971. Four were converted to non-powered electric train-heating units, a role that lasted a decade. Only one survived into preservation.

The North British Class 16s were a class of 10 locomotives built for evaluation purposes. They looked similar to the Class 15s and had the same Paxman engine. However due to poorer ventilation, they were more prone to reliability issues. They also ran with an electro-magnetic control system for multiple working which wasn't compatible with the more common electro-pneumatic system.

Their working lives, short as they were, were based in Stratford. Since they were unreliable and only a small, non-standard class, they were withdrawn by 1968 and cut up by 1969, after only eleven years in existence.

The Class 17s were universally known as 'Claytons' after the company that produced the design. Construction was sub-contracted out to Beyer, Peacock and Company of Manchester where 117 were produced between 1962 and 1965.

Lessons had been learnt from the poor visibility of the North British and BTH Type 1s and so the 'Claytons' had a large central cab with long, low bonnets at either end. The low bonnets meant that power had to come from two horizontal Paxman engines, each giving 450hp. The locomotives weighed in at 70 tons and had a Bo-Bo arrangement. Maximum speed was 60mph. Their tractive effort of 40,000 lbs was similar to that of the largest steam express locomotives but due to the different way the theoretical power found its way to the rails, the Class 17s were never going to show up a big steam engine. Because British Rail wanted a central cab Type 1 with good visibility, the locomotives were ordered straight from the drawing board, despite the Class 20 already having proved itself. What could go wrong?

Camshafts and cylinder heads to name two things. Even after modifications, 40% of the locomotives were out of use at any one time. To make matters worse, visibility was not as good as expected. The crews could not see what was happening just in front of the locos over the long bonnets, something that was a major concern in a locomotive often used for shunting, and freight trains that needed to be regularly coupled and uncoupled.

The first examples went to the Scottish Region, and the class eventually served both the London Midland region2 and the Eastern Region. With the fall in traffic, and their appalling reliability compared to the Class 20s, the withdrawal of the 'Claytons' started in 1968, all of them being off the network by 1971. Some examples had working lives of only five years and the class was to all intents and purposes a fiasco. They are an example of how poorly the acquisition of new diesels was handled. Even when the 'Clayton' was found to be a poor alternative to the proven Class 20, more and more were built, as the contract, signed without even a running prototype, had to be honoured. One survived into preservation.

Derek in the Thomas the Tank Engine TV show was a 'Clayton'. The Clayton model train is popular amongst model railroaders, and ironically, the one manufactured by model-maker Heljan was prone to the same unreliability issue as its real-life equivalent.

The Class 20 was by far the most successful of the Type 1s. It did not suffer from the unreliability of the other small diesels. Despite most of their duties no longer being applicable to a modern railway, in 2011 they were still doing valuable work on the network.

Between 1957 and 1968, 228 of the locomotives were built at the Vulcan Foundry and at Robert Stephenson's works in Newcastle. The design was from English Electric, so these were known, until TOPS, as the English Electric Type 1, or more commonly as 'Choppers' because of the sound of their engines.

They were a single cab design, but the cab was actually at one end, rather than somewhere in the middle. This meant that there was actually an unobstructed view out of the locomotive in one direction. In the other direction, looking past the long, blunt nose, the visibility was similar to that of a steam locomotive. The 73-ton Bo-Bo locomotive was powered by an English Electric eight cylinder engine which gave it 1,000hp and a top speed of 75mph.

It wasn't all smooth sailing. Because of its limited visibility, the powers that be decided to halt production in favour of the Class 17. When the 'Clayton' turned out to be a failure, production was eventually moved back to the Class 20.

Because they were designed for freight transport, they were not built with any form of train-heating equipment. A few were fitted with through pipes to allow steam from other locomotives to heat steam-heated carriages. Class 20 locomotives did take some passenger trips, but generally in the summer when heated carriages were not a requirement. They were also used in conjunction with Class 37s in the Highlands.

One of the useful features of the Class 20 was that it could easily work in multiple. They were often connected nose to nose, giving a 2,000hp locomotive that was relatively light on its wheels and had good visibility at either end.

Modern uses for the locomotive include moving nuclear flasks, transporting new London Underground stock and the construction of High Speed 13. Many have found new homes on preserved lines, while others are seen running passenger excursions during the summer.

1See the Classification section of the End of the Line for Steam on British Railways Entry.2The North-West of England and the West Midlands.3The line from London to the English end of the Channel Tunnel.