Hadlow Road Railway Station, Wirral, UK Content from the guide to life, the universe and everything 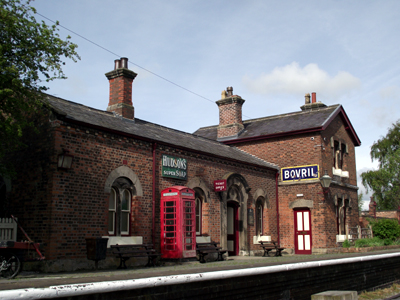 Hadlow Road Station is a Grade II listed building that was built in the 1860s. It is now a heritage centre within Wirral Country Park showing what a railway station would have looked like in the 1950s.

History of the Line

Hadlow Road Station was opened on 1 October, 1866, and was situated on the Hooton to Parkgate branch line. This line linked south west Wirral to the Birkenhead to Chester line, which ran along the east of the Wirral. In 1886, after the Mersey Rail Tunnel had opened and connected Birkenhead to Liverpool, the branch line was extended along the west of the Wirral from Parkgate to West Kirby.

The line proved very popular, with the number of trains running through the Station increasing to a peak of 20 in each direction on weekdays during the 1930s. Some trains that stopped at the Station contained 'through carriages' from London Euston. These had travelled from London, been detached from an express train at Hooton, and were continuing along the line beyond West Kirby to the seaside resort of New Brighton. Trains making the return journey also stopped at Hadlow Road.

The number of trains was reduced during and after the Second World War, and the number of passengers decreased as the popularity of motor cars increased. The Station closed to passenger services on 15 September, 1956. It closed to freight trains on 7 May, 1962, less than a year before the infamous Beeching Report recommending station closures was published.

Hadlow Road Station served the village of Willaston. Willaston was mentioned in the Domesday Book as the name of the Hundred1 in Cheshire covering the peninsula that later became known as the Wirral. According to the Book, the Hundred contained 43 places - the largest was Eastham, with 79 households, and the smallest was Hadlow, which had just one household in it. In 1865 Willaston village had 685 residents.

You might think that the Station should have been called Willaston Station, but that name had already been taken by a station serving the village of Willaston in south Cheshire. This was situated on the Crewe to Shrewsbury line that had opened in 1858. The station that opened in 1866 was instead named after the road that leads to it, which the railway line crossed.

After Hadlow Road Station was closed to all railway traffic in 1962, the Station was emptied. The tracks were removed in 1964. However, that was not the end of the line for the Station. The Countryside Act 1968 allowed for the creation of new parks in rural areas, and the first to be established was Wirral Country Park. This encompassed the land that had contained the 12-mile route of the railway line from Hooton to West Kirby. The footpath, bridleway and cycle track that follow the route of the line are collectively known as the Wirral Way. Hadlow Road Station was restored to be a feature of the Country Park and it is now one of the two visitor centres in the Park2, having a car park and toilet facilities.

A plaque by the door into the Station invites visitors to imagine what it would have been like in the 1950s with steam trains passing through and passengers waiting to travel. You can go into the waiting room and see the ticket office where various items of railway memorabilia are on display. On the platform there is a red telephone box and a goods trolley. You can look through the window of the signal box, which fell into disrepair, but was restored in 2015 in preparation for the 150th anniversary celebrations in 2016. If you go to the level crossing gate, you can either cross to the other platform and look at the (somewhat derelict) waiting shelter there, or stay at track level and admire the short section of track that was laid in the 1970s to add to the authenticity of the site. You can also enjoy the track-side view of the Station building including the enamel adverts on its walls, and walk along the Wirral Way as it runs parallel to the track.

The Park Rangers used the Station house as office space until December 2015. The Friends of Hadlow Road Station group was established in December 2014 and arranges volunteer days, when people help to keep the platforms well-maintained and tidy, plus fundraising events.

1An administrative region in a county.2The other visitor centre is in the village of Thurstaston, which is at the half way point of the line.