Birkenhead Park, Wirral, UK Content from the guide to life, the universe and everything 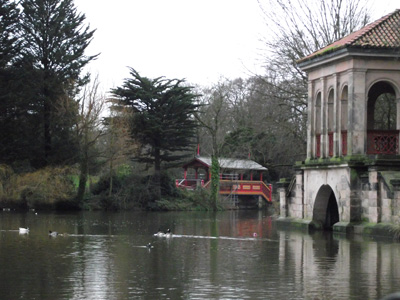 Famous for being the first public park in the world, and for inspiring the creation of Central Park in New York City, Birkenhead Park was designed in 1842 by Sir Joseph Paxton1 and was formally opened in 1847.

Birkenhead Park was created from 125 acres of marshland on the Wirral Peninsula. The funds to pay for the land and creation of the Park were raised by selling about 100 acres of land around the Park for house building2 and some of the land within the Park was rented out for sheep to graze.

Lakes were dug to contain the water drained from the land and also to provide habitats for fish, ducks and other wildlife. The soil that was excavated from the lakes was mounded up in places to provide texture and interest in the park landscape. Many different varieties of trees and shrubs were added as well as grass areas and a rockery made from large chunks of sandstone. A road through the centre of the park divided the land into Upper Park and Lower Park. Roads were also constructed around the perimeter of the Park, so that traffic was not inconvenienced too much, but the inner areas of the Park were safe and accessible for pedestrians who could use narrower smooth paths to wander around the site at leisure.

Nine entrances to the Park were created, each guarded by a Lodge in a distinctive architectural style including Norman and Gothic. The Grand Entrance, at the junction of Park Road North and Park Road East, was designed in Classical style with Ionic columns and archways. It led visitors directly to the large Lower Lake, where the most iconic Park view can be found. The symbol of the Park is the Swiss Bridge that spans a section of Lower Lake and stands out with its ornate design and bright red and gold colouring. Also notable is the Boathouse that looks like a Graeco-Roman temple, complete with mosaics on the floor inside.

To introduce more colour into the Park, in 1921 a Palm House was built, consisting of a glass and steel dome on a brick base. It housed a palm tree in its centre, which was surrounded by statues and tropical plants. Outside the Palm House were several flower beds in a geometric pattern, each filled with colourful plants. After being damaged during the Second World War it had to be replaced, and the new structure built in the 1950s housed cacti instead. In 1957, a 'Blind Garden' with scented plants and a guiding rail was made on the site of a lake that had drained away. Neglect of both sites meant that they were eventually closed - the Blind Garden was removed in the 1970s, as were many of the trees in the Park that fell victim to Dutch Elm Disease, and the cactus conservatory was taken down in 1983. The drained lake was refilled during the 2004 refurbishments of the Park.

Management of the many trees around the site is important - as well as the loss of the elm trees in the 1970s, storms caused a fairly large tree to fall in 2014 - it damaged the Park railing and blocked the road outside the Park for some time as well. There are around 60 different species of tree in the Park, including a strawberry tree and a cucumber tree as well as more well known types such as copper beech and sycamore. Commemorative oak trees celebrate Shakespeare's birthday and the coronation of King Edward VII.

Birkenhead Park has been a Conservation Area since 1977 and an English Heritage Grade I Listed Landscape since 1995. The Grand Entrance is Grade II* listed and the Boathouse, Swiss Bridge and Lodges are all Grade II listed.

Uses of the Park

As well as the Park being a pleasant place to visit and walk around while enjoying fresh air, there were organised activities for people to participate in from almost the time the Park was opened. A Cricket Club started in 1849, football was allowed in the Park from 1861 and a Rugby Club was established in 1871. Hockey was also popular there at the turn of the 20th Century. For those who preferred music to sport, the Boathouse was occasionally used for performances until a bandstand was installed in 1885 for a local brass band to use regularly. The Park hosted the National Eisteddfod of Wales arts festival in 1917, and the commemorative Eisteddfod Stone is still in the Park today. The bandstand was improved in 1926, but it was removed in the late 1940s.

During the First World War, allotments were set up within the Park. Many of the Park staff went to serve in the army and the rugby pitch was used to stable cavalry horses. During the Second World War, the Park was again used for allotments in the Dig for Victory campaign. Bombs fell in the Park, and a Spitfire crashed into Lower Park in 1942. The engine and other components of the plane were not recovered until 2007, as they had been buried almost 15 feet deep by the impact and by nature. They are now in Fort Perch Rock museum in New Brighton.

We lived right opposite the lower park, called the Pindies locally, and just down from the rugby club. Did you know the small island on the main lake was once overrun with rabbits that had either escaped or been set free by careless owners? Many a Sunday we would take any veggie scraps over to the park and join the queues of people feeding the now-thousands of semi-feral rabbits! Happy days!
- An h2g2 Researcher

In the late 20th Century, Birkenhead Park had a reputation for being an unpleasant place to visit, as security patrols had stopped in the early 1980s so incidents of antisocial behaviour were more common. However, in 2004 the Park gained a new lease of life when it secured a grant from the Heritage Lottery Fund. The £11.5 million raised in the bid enabled the construction of a pavilion with reception area, café, toilets3, exhibition space and staff to run it. Money was also used to make improvements within the Park, with safety improved by the addition of railings in keeping with the style of the Park, and new benches and fishing platforms added. The Boathouse and Swiss Bridge were refurbished to restore them to their former glory.

The Pavilion is used for exhibitions, and especially for art exhibitions by the neighbouring Park High School. The annual Wirral Flower and Vegetable Show has taken place in and around the Pavilion since 2006. People are much less worried about antisocial behaviour, so there is a good family atmosphere in the Park. The only care needed is to watch where you step, as the Park is popular for dog walking and fouling can be a problem. Look out for the outdoor gym equipment items that are dotted around, or if that isn't your scene you can spot wildlife instead - duck food is on sale in the Pavilion, so you can get close to ducks and geese as well as squirrels, pigeons and other birds.

The Park is still active as two cricket clubs have their home in the Park, and there is a football pavilion as well as the Rugby Club. There are tennis courts and bowling greens, plus a children's play area. Performances take place in the open spaces, and there are events for children and adults such as wildlife spotting, mass runs and clean-up days. The Park also hosts a parkrun, which takes place weekly at 9am on a Saturday morning.

The Friends of Birkenhead Park group, established in 1976, plays a role in the management and maintenance of the Park. Wirral Borough Council recognises the importance of the site, and has a plan in place to ensure that the people of Birkenhead and elsewhere can continue to enjoy the Park in the years to come.

1Who became famous as the architect of the Crystal Palace at the Great Exhibition of 1851.2The marshland had been bought cheaply but commanded a much higher price once it had been drained and the Park laid out, as the location became very desirable.3Replacing the 'unsightly' public toilet block.