King Edward VII Memorial Clock Tower, Birkenhead, Wirral, UK Content from the guide to life, the universe and everything 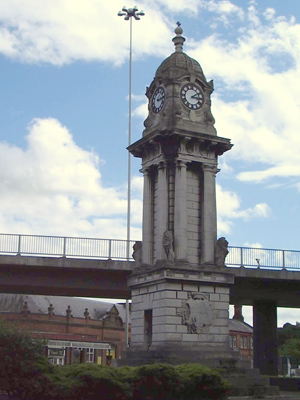 Now rather isolated and forlorn, this Grade II listed building is situated on a raised, grassy triangular plot of land in Clifton Crescent, near Birkenhead Town Centre on the Wirral Peninsula in North West England. Vehicles on the flyover rush past it on their way to Liverpool via the Birkenhead Tunnel. Even on the ground, traffic users don't have time to look at this monument as they enter a busy roundabout system between Borough Road and Argyle Street. Pedestrians are also usually too mindful crossing the various roads to notice the tower, as it is overshadowed by the imposing flyover.

The Clock Tower is a memorial to the reign of King Edward VII and was designed by Edmund Kirby. The tower is roughly 40 to 50 feet in height from its base, and is made from Portland stone (creamy-white in colour). It has a square base, and each side of the monument is similar. Five steps lead up to the plinth, which is carved with a rough finish to look like brickwork. On each corner of the plinth is a carved lion, and each lion sits between two Doric columns1. The clock housing atop the columns is an elaborate piece of masonry, with a clock face on each of its four sides beneath a dome, finished with a carving of the Sovereign's Orb at its pinnacle.

On one side of the monument's plinth is a narrow doorway. This leads to an internal stairway up to the clock mechanism. On another side is a profile portrait of Edward VII. The third side is carved with a relief of the Royal Coat of Arms, and the fourth side bears the inscription:

The monument was originally situated in Argyle Street, near Birkenhead Central Station. It was in the way when the area was redeveloped to improve road links to the Birkenhead Tunnel2, so in about 1929 it was moved 50 metres to its present location in Clifton Crescent. The Central Hotel was built in 1938, and the flyover was added from 1965, so the Clock Tower has seen many changes to its surroundings since it was first built.

The fact that the monument was moved and built around, rather than simply demolished3 when the land around it was needed, shows the regard that the Council members originally had for the memorial. Presently, youths can sometimes be seen congregated around the tower, and there is a small amount of graffiti on the plinth. While the columns are clean, the clock housing looks rather grimy. All this indicates that the memorial is held in less regard by the Council and the people of Birkenhead than it used to be, although the clocks are maintained and in working order, so it has not been completely forgotten.

Edmund Kirby was an important figure in Birkenhead and its surrounding areas. Born in Liverpool in 1838, he studied in London then moved to Birkenhead in 1863. A religious man, he worked on churches, faith schools and hospitals, but also designed private houses, including mansions for wealthy gentlemen on the outskirts of Birkenhead, and cottages for factory workers in Port Sunlight.

He designed many buildings and architectural features during his career, and although he was involved with projects across the United Kingdom, his office was in Liverpool and a substantial amount of his work took place in Birkenhead4. He was therefore a fine choice to be the architect of the memorial to Edward VII.

Edward VII was a popular king - his strict upbringing by Queen Victoria led him to become somewhat rebellious, with a love of women, theatre and sport, but he also had a great deal of charm. He willingly promoted worthy causes and attended public functions on behalf of his mother, travelling widely across the British Empire.

As Prince of Wales, Edward was in Birkenhead for the opening ceremony of the Mersey Rail Tunnel on 20 January, 1886. Various activities took place around Birkenhead Central Station during the day, and the trains were stopped so visitors could walk through the Tunnel between 2pm and 7pm.

He was well thought of in Birkenhead even before the official visit - the Argyle Theatre was renamed 'The Prince of Wales Theatre' from 1876 to 1890 in his honour. An event took place in Birkenhead Park to celebrate his coronation as King Edward VII in 1902, and an oak tree was planted. Commemorative medals were issued to Birkenhead Elementary School children in the same year. He returned to the Mersey area in 1904, when he laid the foundation stone of Liverpool's Anglican Cathedral.

When Edward died on 6 May, 1910, he was mourned across the Empire, and not least in North West England. On the national day of mourning on 20 May, services were held in all of Birkenhead's churches, shops were shut, and purple and black drapes were displayed to represent the mourning of royalty.

Edward's work during his time as Prince of Wales and after the death of his mother had brought the Royal Family closer to the people it served. The regard and affection he inspired during his life is symbolised in no small way by the King Edward VII Memorial Clock Tower in Birkenhead.

1A style of Greek architecture. The columns are 'fluted', meaning that vertical, parallel grooves are cut in them - in this case with 20 grooves.2 The Birkenhead Queensway Tunnel was under construction from 1925 to 1933.3Several houses were demolished in 1960 to make space for the flyover.4He also designed the monument to Queen Victoria that was installed in Hamilton Square in 1905.