Williamson Art Gallery and Museum, Birkenhead, Wirral, UK Content from the guide to life, the universe and everything 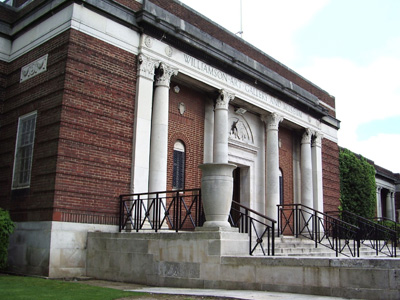 The Williamson Art Gallery and Museum was opened in 1928 to hold Birkenhead's burgeoning art collection. Designed by Liverpool architects Hannaford and Thearle in a neo-Georgian architectural style, with Corinthian columns flanking the entrance, it was purpose-built to display artwork and artefacts to best advantage. The Museum's collection focused on works by people and organisations with a local connection as well as international items that would be of interest to local visitors. It was established by Birkenhead Borough Council and named after John Williamson and his son Patrick, who bequeathed money to the Council for that purpose. The Museum is situated on Slatey Road, Birkenhead, and is in an area surrounded by houses. It was refurbished in 2013 at a cost of £1.3 million.

The Museum holds a variety of items, from paintings and sculptures to furniture and furnishings. Many of the paintings in the collection are available in digital form on the BBC YourPaintings website.

In particular, the Museum holds the archive of the Arthur H Lee Tapestry Works, a company that used to be situated a short distance from the Museum in Birkenhead but which closed down in 1970. Items in the Lee's collection include fabric samples, pattern sheets and various pieces of machinery for the manufacture and decoration of material.

The Museum is well known for its room dedicated to maritime history and the detailed scale models of ships that were built at Cammell Laird in Birkenhead, such as the Mauretania and Mersey Ferries.

Another important collection is the display of Della Robbia pottery that was made in Birkenhead between 1894 and 1906. The company was founded by Harold Rathbone and specialised in making robust earthenware in the style of the products made by the Italian Della Robbia family in the late 15th Century. Items ranged from household crockery to wall plaques, but all the pieces were distinctive for being decorated in striking colours and patterns.

As well as the older items, the Museum also invests in modern art by local artists, including paintings of local scenes and sculptures in clay or bronze. Temporary exhibitions change regularly and encompass all kinds of topics by artists from Birkenhead and beyond. For example, in 2014, there was an exhibition of works by picture book illustrator Gary Blythe, who was born in Liverpool and lives on the Wirral, and also a retrospective of works by Henry Moore, the Yorkshire-born internationally renowned artist.

It was announced in December 2013 that Wirral Council planned to substantially reduce its funding of the Museum in the subsequent two financial years, even though the refurbishment had not long been completed. The loss of funding at such short notice would have forced the Museum to close in March 2014, but after an outcry supported by the local press and Birkenhead MP Frank Field, the Council agreed to reduce funding more gradually to give supporters time to establish a new way of running the facility.

The Friends of the Williamson group was founded in the 1990s and helps with promotion of the Museum and running events. There is a Facebook page, and a blog was started in 2013.

The Museum now has a café selling snacks and light meals. The gift shop stocks a wide range of products, from souvenirs to original art. A bookshop opened inside the Museum in 2014 selling a range of secondhand and rare books.

The car park is situated along one side of the building, with 34 spaces including one space for Blue Badge holders. There are toilets, including an accessible toilet with adult changing bench, and there is a ramp at the entrance as well as steps.

The Museum used to be open six days a week, but the budget cuts meant that staffing hours had to be reduced. From 1 June, 2014, the Museum is closed on Mondays, Tuesdays and Bank Holidays, but is open from 10am to 5pm on all other days. Entrance is free, although donations are welcomed. Concerts, adult education courses and workshops for children take place during the year, and the galleries can be booked for private functions. Up to date details are available from the Friends of the Williamson, or from the Wirral Council Website.