Birkenhead Priory, Wirral, UK Content from the guide to life, the universe and everything 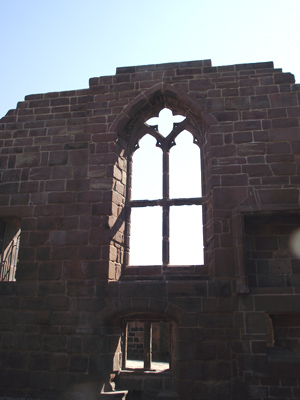 Now situated in an industrial estate on the outskirts of the town of Birkenhead on the Wirral in the UK, Birkenhead Priory is a place for reflection and recreation away from the busy town nearby.

The Priory was established in the 12th Century to house 16 Benedictine monks. The monks there carried out farming, plus cleaning the River Mersey and fishing in it. The monks also became responsible for the original ferry across the Mersey, which had been operating since at least 1150.

The buildings on the Priory site were made of wood initially, but by the 14th Century sandstone buildings in a fairly standard monastery layout had been constructed. There were buildings for day to day living, including the refectory dining room, the dormitory sleeping quarters and an infirmary for treating people who became unwell, plus guest quarters. There was an Undercroft for storage. For monastery business, there was a cloister (an undercover walkway around the square of land between the Priory buildings) plus the chapter house where the monks would meet to hear the news from the Prior, and a church for daily worship. There was a buttery for processing some of the produce from the farm and a scriptorium where manuscripts would have been written or copied.

King Edward I visited Birkenhead Priory in 1275 and 1277 en route to battles in Wales, but the Priory was not always highly regarded. Even after the Priory was allowed in 1330 to implement a toll for the ferry and charge travellers for board and lodging, the finances of the site were precarious, and by 1379 there were only five monks living there.

When the Dissolution of the Monasteries instituted by King Henry VIII occurred in 1536, the Prior was given a pension, and the monks were given a robe and 40 shillings and found jobs in the outside world, such as being singers or bookbinders. There was a rumour that some monks were trapped in a secret tunnel while trying to escape from the Priory with treasures, after the passage became blocked, but no evidence has been found.

The land was sold off and a manor house was built. The Chapter House was turned into a chapel and was used for worship until St Mary's Church was built behind it in 1821. The manor house was demolished in 1843, then in 1857 the shipbuilders that later became Cammell Laird moved on to part of the Priory land. Birkenhead Council bought the Priory ruins in 1896 and the site was renovated during 1913-1919. Bombs struck during the Second World War but the damage done was restored by 1949. Further conservation of the Priory took place in 1973 and 1986. 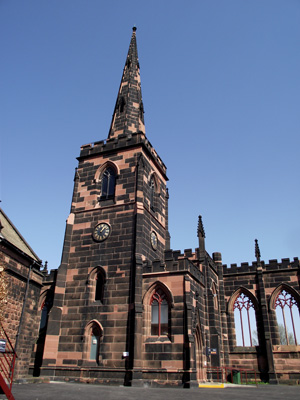 Today the ruins of the Priory are able to be explored, and the Undercroft has been turned into a museum and exhibition space, with permanent displays giving information about the history of the site and temporary art exhibitions being featured throughout the year. St Mary's Church was partly demolished in the 1970s, but the façade and tower are still there - toilet facilities are available in the base of the tower, and if you are able to climb stairs and don't mind heights there are superb views of the Wirral and Liverpool from the top of the tower.

Services take place in the Chapter House regularly. Concerts and other events are held in the Scriptorium (which is above the Chapter House and accessed via a modern metal staircase) and in the Refectory (which is above the Undercroft and accessed either by a spiral stone staircase inside the Undercroft or by modern metal steps outside). There are ramps and pathways so wheelchair users can explore the ground floor of the site, but note that there is no dropped kerb on to the pavement outside the Priory, and some of the ramps are quite steep or have steps at the bottom, so assistance may be required.

The Priory site is (at the time of writing) open five days a week, from 1pm on Wednesdays, Thursdays and Fridays and from 10am on Saturdays and Sundays. The site closes at 5pm during British Summer Time and at 4pm during the winter. The Priory is signposted from the roads around the site and there is some on-street car parking available near the main gate. Entrance is free, although donations are welcomed. Up to date information about opening times is available from the Wirral Council Website and events and activities are advertised on the Priory's Facebook Page.