British Summer Time Content from the guide to life, the universe and everything 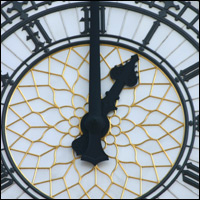 Technically, British Summer Time begins at 1am on the last Sunday in March, when official clocks are put forward one hour (ordinary household clocks are changed over the course of the next few days, or even weeks or months, depending upon the location of the clock) and ends on the last Sunday in October, when the lost hour is restored to the nation.

Summer duly occurs at some point during this period, being characterised, according to ancient belief, by spells of warm, sunny weather; so if at any time in those months there is sunny, warm weather for more than two consecutive days, the population is able to shrug collectively and say: 'Well, that was summer.' The two consecutive days are normally (although not invariably - see Bank Holidays below) a Thursday and Friday, the weather turning cool and cloudy again for the weekend.

As the weather is an unreliable indication of the season, other observations are necessary to judge whether or not British Summer Time has actually begun. They include the following:

In other countries, these are known as public holidays, or national holidays; in Britain, their occurrence is linked to the suspension of banking activities for a day, which is supposed to hinder the operation of all other industries, leading to a holiday for the nation, mostly spent exchanging money with retail outlets. The first occurs at Easter, being Good Friday and Easter Monday. At the prospect of four consecutive days off work, the entire nation jumps into their cars and heads for the furthest traffic jam.

The first Monday in May is the May Day Bank Holiday, mainly appreciated by schoolchildren and teachers, who find themselves unexpectedly at home just as they were starting to get to grips with their revision timetables. This is followed at the end of May by the Late Spring Bank Holiday (the name suggests that any indicators of summer thus far are premature), which falls in half-term, a school holiday intended to divide the summer term into two equal halves, which invariably falls five weeks after Easter and seven weeks before the end of term. There are then 12 gloriously hot and sunny Mondays until the Summer Bank Holiday on the last Monday in August.

About once in ten years the Summer Bank Holiday is long, hot and sunny, and followed by an equally hot Tuesday. Unfortunately, many workers in Britain are so weakened by prolonged exposure to the sun on the Monday that they succumb to viral illness on the Tuesday and are unable to return to work.

An old British saying is: 'Cast ne'er a clout till May is out1.' This means that one should not start to don one's summer wardrobe until 1 June. In particular, tights and vests should be worn, whatever the temperature, until this critical point in the calendar, or so the saying would have us believe. (The corresponding date for resuming one's winter wardrobe and putting on the central heating, particularly in public buildings, is 1 October).

There are three sorts of summer music, all loud.

'One swallow does not make a summer' is another old saying, meaning that the presence of a whole flock of small African birds is required to indicate for certain that summer has arrived. It is quite possible to pass an entire summer in Britain without seeing any swallows at all, until a flock gathers to start migrating to warmer climes for the winter. This event thus heralds both the start and end of summer in the space of half an hour.

A good rule of thumb for identifying summer is that it is that time of the year when football is not being played, but it only works for three years out of four owing to the FIFA World Cup tournament. The cricket season, which runs from April to September, is generally too long to be useful as an indicator of summer, but home international cricket, in the form of One Day Internationals and Test Matches, is slightly more compressed. Sporting events which definitely take place in summer are Henley Regatta (boating), Royal Ascot (horse racing), Cowes Week (sailing) and Wimbledon (lawn tennis). Wimbledon takes place during what is generally referred to as 'the height of summer,' meaning that during this particular fortnight the weather will be at its most extreme, ranging from day-long downpours of rain and a consequent backlog of matches, to temperatures of 100 degrees on Centre Court.

Wimbledon also coincides with the appearance of the earliest, and most expensive, English strawberries. These fruit are particularly associated with summer in the British Isles, despite the fact that imported strawberries are now available all year round in most supermarkets. Imported strawberries have, however, brought two benefits to native strawberry suppliers:

The fruit itself is not the best indicator of summer; this is in fact the appearance of large painted pictures of strawberries on roadsides the length and breadth of the country, often accompanied by the letters PYO (meaning 'Pick Your Own'). Families spend entire weekends picking mountains of strawberries (and, to a lesser extent, other soft fruits) and then not making them into jam because the local shop has run out of sugar.

Although the weather itself may be cool, cloudy, windy or rainy (or all four simultaneously at the height of summer, see above), the television weather forecasts can indicate that British Summer is in progress, with the appearance of pollen counts, pollution indices and sun exposure times. Meteorologists and weather presenters also tend to become particularly apologetic if, during what might be considered 'summertime', the weather is behaving inappropriately.

Other indicators of summertime found in the media include '...and finally' items on the news featuring extremes of weather, and the tabloid headline 'Phew, What A Scorcher!' accompanied by a picture of a scantily-clad female.

The six weeks which comprise the peak summer holiday season are marked by a 100% increase in the price of a family holiday, so another indicator of summer is the appearance of long queues of caravans on the roads and large numbers of tents in remote muddy fields. This indicator can be misleading, however, as it can start in spring and continue until late November for some diehard out-of-door types and retired folk who like to avoid the summer rush.

British Summer Time is therefore hard to pinpoint, but if you ever find yourself relaxing after an exam, wearing a vest and eating strawberries, wondering when the next Bank Holiday is while watching a weather forecast which includes a sun exposure time, with the prospect of Wimbledon highlights later in the evening, which you cannot hear over the noise of your neighbour's radio and the sound of queuing caravans on the road outside, you are probably experiencing it.

1This saying doesn't actually refer to the month of May but to the flower of the same name, the Mayflower of the blossom of the hawthorn.