How To Predict the Weather via Cloud Formations Content from the guide to life, the universe and everything 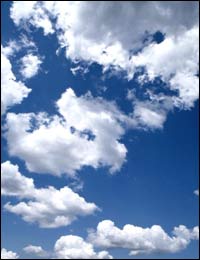 By observing and interpreting the formations of clouds in the sky above, it is entirely possible for the casual observer to predict what kind of weather to expect over the coming hours and days.

So, What are Clouds?

Clouds are the result of moisture-laden air cooling down to saturation point (its dew point) by one of two methods - either by decreasing the air pressure, when the air is forced to rise (known as adiabatic cooling), or when the air cools through conduction when it mixes with colder air.

When air cools down, it is less capable of holding onto water as vapour, and so the water vapour condenses, forming clouds.

When the water vapour condenses it forms water droplets and/or ice crystals which are held in the atmosphere by the turbulent, convective movement of the surrounding air and that in the cloud itself.

When these droplets coalesce into larger and heavier droplets, they become too heavy for the convective forces to keep them aloft. This leads to precipitation, either in the form of rain or ice (snow, ice- crystals etc).

Clouds are formed as a result of the following methods:

A brief word on nomenclature. Four simple Latin terms are used to create the naming convention that describes the list of cloud types we see in our skies:

These four terms are compounded together in a various ways (as described below) to form the well known list of high, medium and low cloud types we use today.

The terms cirrus, stratus and cumulus are used as primary cloud type designators, describing individual cloud types on their own. The term nimbus is purely a prefix or suffix (depending on the cloud) and add the meaning of 'rain' to that primary cloud e.g. cumulus becomes cumulonimbus - rain bearing cumulus.

Cirrus clouds are those dreamy, thin, wispy clouds, extremely high up in the atmosphere that can sometimes form a halo around the sun or moon. They are predominantly formed from ice crystals and are often said to be the precursor to bad weather as they tend to materialise on the leading edge of frontal activity.

Cumulus clouds, also known as heap clouds, typically are the fluffy, cotton wool style clouds that are often seen in our skies. They are undoubtedly the best known clouds, but by far the least understood.

There are six major types of Cumulus cloud:

The term stratus comes from the Latin meaning layered. The distinction in this type of cloud is that it has no real defined base or top. It tends to appear as a sheet of cloud, covering a potion of the sky.

Forecasting for the Lay-man

Identifying the cloud types listed above, and combining a number of observations, spaced over a few hours, can give an indication as to what the weather has in store over the coming two days.

Obviously the government has invested millions of pounds into weather forecasting, so don't expect it to be fool-proof, but at least with some cunning and good identification, it's possible to do a bit of off-the-cuff forecasting to get yourself out of trouble, if necessary.

How To Tell if the Weather Is Going to get Worse?

How Do I Tell if the Weather Will Get Better?

And What Can We Tell From the Clouds Themselves?

1The tropopause is the boundary between the troposphere and the stratosphere. The troposhere is the portion of the atmosphere that comes in contact with the ground (and contains all our weather). It stretches up to about 16km at the equator and 9km at the poles.