The U-Boat Story, Birkenhead, Wirral, UK Content from the guide to life, the universe and everything 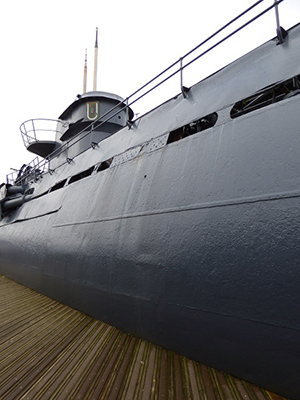 The U-Boat Story in the Woodside Ferry Terminal in Birkenhead is a museum dedicated to the preservation and exploration of the German submarine (Unterseeboot, or U-Boat) U-534.

The U-Boat's journey to its current home on the Wirral was a convoluted one but it is now a valuable asset to the region.

U-534 started its life in 1942. Over 250ft (75m) in length, it was equipped with the latest technology, including a Pillenwerfer device for confusing sonar detectors by creating bubbles a short distance away from the main body of the submarine. It housed torpedoes with the ability to home in on the sound of their targets and also had a gun for firing at aircraft when it was not submerged. It was used as a training vessel for around 18 months, and entered military service in May 1944 as a weather-reporting station during the Second World War.

It managed to steer clear of trouble until 5 May, 1945, - the order to surrender had been given, but U-534 was not displaying the black flag of surrender, so a British Royal Air Force bomber dropped depth charges. A hole was blasted in the hull and the submarine sank off the coast of Denmark. All the crew escaped, although sadly one crewmember died soon after surfacing from the depths1 and two later died of exposure in a lifeboat.

The wreck was found in 1986 by a diver, Aage Jensen. Speculation about the cargo it contained (perhaps Nazi  gold or other treasures) enticed a Danish millionaire, Karsten Ree, to fund the salvage of U-534, and it was raised in 1993 at a cost of £4 million. Although no gold was found, the submarine did contain a wealth of material that told the story of what life was like in a U-Boat during the Second World War.

In order to preserve its history, U-534 became part of the UK's Warship Preservation Trust's collection2 and was put on display outside their dockside museum in Birkenhead. Museum visitors who were able to do so could go on a tour of the vessel and experience the cramped and rusty interior directly. For those unable to climb into the U-Boat, there was a virtual tour so people could explore the desolate remains via a computer screen.

In 2006 the area around the museum was redeveloped for housing. The museum was forced to close and the warships had to be relocated. U-534 was purchased by Merseytravel, the company who manage the tunnels, rail and ferry services around the River Mersey, and it was cut into five pieces so it could be moved to a new museum at the Woodside Ferry Terminal in Birkenhead. 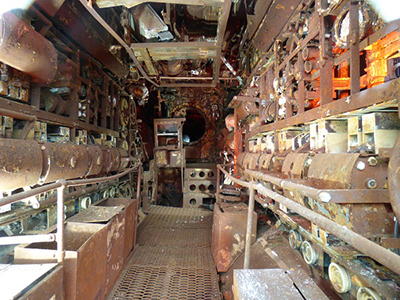 The new museum opened in February 2009, at a cost of £5 million. The centrepiece of the U-Boat Story is U-534 itself. The pieces of the submarine have been laid out so that it is easy for visitors to move around them. The cut ends have been covered with glass to protect them, but also to allow visitors to see into3 the sections of the vessel without having to climb through hatches or up ladders.

Inside the museum building there is a display case containing artefacts from the vessel, such as cutlery and crockery, clothing, games, medical items and personal letters. There are even instructions for how to use the toilet4, as it was cleverly designed to ensure the waste could be ejected without allowing water in, but required some effort on the part of the user.

There are videos and interactive items including a periscope and an Enigma machine. Sadly some of the interactive exhibits, particularly those outside by the sections of U-534, were not working when this Researcher visited in 2018, but there was still plenty to look at, read about and explore.

Woodside Ferry Terminal contains facilities for visitors including a café serving a range of hot and cold food and drinks and a shop selling souvenirs and postcards. A small car park outside has a few spaces for disabled people who have a Blue Badge. There is a charge to enter the U-Boat Story, but concessions and family tickets are available. If you take a trip on the Mersey Ferry you can get discounted entry to the museum. You could even combine a Ferry trip and the U-Boat Story with a visit to Spaceport, which is the museum at Seacombe, the other Ferry Terminal on the Wirral, but check the opening times carefully as the attractions close earlier at weekends during the winter months.

1He held his breath without exhaling as he ascended so his lungs were damaged when the air inside them expanded as the pressure decreased.2The Danish company that owned the U-Boat did not have anywhere to keep it, so the UK gladly hosted it in the Mersey.3Unfortunately glare on the glass can make the interiors difficult to see. However, excellent views can be captured in photos by placing a smartphone or camera lens against the glass.4There were two toilets for 52 men, and one of the toilets was used as a storage room at the start of a mission as space for food and other provisions was so limited.