Kew Gardens' Important Trees: English Oak - Quercus robur Content from the guide to life, the universe and everything 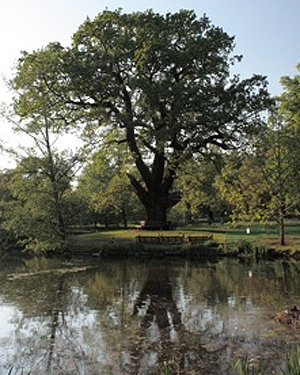 This particular oak, often known as the English oak, is one of Kew Gardens' Heritage trees. Other names for the tree are common, truffle and pedunculate oak (sometimes given the Latin name Quercus pedunculata). In the wild, the species is found over a large area including most of Europe, stretching into Asia, parts of North Africa, and the Caucasus. It is a large, deciduous tree, reaching heights of 140 feet (43m) with a spread of 80 feet (25m) and a broad, round crown. It is slow growing, at around a foot (0.3m) per year but is long-lived, exceeding 700 years in age.

The English oak is very resilient, and can survive attacks from many different types of animal, insect and micro-organism. A tree may be denuded of most of its leaves by voracious caterpillars and other organisms and still survive! It is believed that the oak has the largest ecosystem in Britain, supporting as many as 200 different organisms, and it would be a major loss to both the environment and the countryside if it should disappear.

Kew's Heritage specimen can be found on the southeast bank of the main lake, close to the Sackler crossing. Another old and popular oak is the Lockerbie Oak, on the opposite side of the lake. This tree was dedicated to the air crew of the Pan Am flight 103, 'Spirit of the Seas', which was brought down in a terrorist attack over Lockerbie in Scotland. The tree was chosen as it is thought that Kew Gardens would have been the last major UK landmark visible before the plane ascended into the clouds on its journey to New York's John F Kennedy airport. The tree has eight benches around the trunk in an octagon, with plaques attached inscribed with the names of all the air crew. In the relatively harsh winter of 2010, a large limb fell from the tree and, at the time of writing (2011), the tree was being monitored in case it had succumbed to sudden oak death. This is a disease caused by the plant pathogen Phytophthora ramorum. This is proving a very troublesome fungus and is being compared to Dutch Elm disease in some circles. The plants that seem worst affected are the larch, unfortunately, and the rhododendron (a possible blessing as it is a very invasive species).

Oaks in Tradition, Folklore and Mythology

As can possibly be noted by its name, the English oak is a tree that is deeply loved by the English and it is this tree, above all others, that is perceived as the backbone and birthplace of the British Empire. It also has the honorific of the 'King of Trees' for this reason. It was the dominant tree throughout Britain until it was heavily exploited for its timber to build the great warships of the British Navy. It is estimated that it took 2,000 trees to make one warship. Everything from houses to ships were largely built from this oak; from the planks to the dowel pegs that joined the planks together. The mighty oak! Heart of oak... There are many expressions for this redoubtable tree. In fact, the English playwright David Garrick penned the lines:

This was to be re-used by Samuel James Arnold in his eulogy on the death of Lord Admiral Horatio Nelson.

It is the prevalence of Quercus robur in Britain, more so than any other Western European country, that formed this deep-seated pride in what may be seen as the Nation's national plant. Many local parishes have at least one oak that is more than 250 years old, usually planted as a commemoration of an event or to identify a special place. One important part the oak played in many parishes was its use in marking the boundary of the parish, although marker-stones, streams and coppiced hedges were also used for this purpose. During the Rogation1 days, the three days preceding Ascension Day, the people of the parish would beat the bounds. This involved taking a willow wand, stripped of its bark, and walking the parish boundary beating known features along the way with the wand to fix that boundary in the parishioners' minds. Other oaks may have been a central, focal point for the community, and many were known as Gospel Oaks. The honorific 'Gospel' came from the habit of the gospels being preached from beneath their mighty shade during the Beating the Bounds ceremony. This practice possibly stemmed from the veneration of the oak going back to the early Celts whose Druids were named after the oak. Their title is believed to derive from 'dru' + 'uid' meaning oak-knower, someone who possessed 'knowledge of the oak'. In fact the only other plant more respected was the mistletoe - Viscum album, which was commonly found growing on the oak, now more often associated with apple trees.

Quercus robur can be found to be rooted throughout the mythology, folklore and religion of the many races of ancient Europe, including the Celts, the Germanic peoples and the ancient Greeks and their gods.

The oak is also recorded in many proverbs, such as:

It is recognised in folkloric rhyme as well, such as forecasting the weather:

Another old piece of verse, about safety during a thunderstorm, is:

Beware of the oak, as it draws the stroke,
And avoid the ash as it counts the flash.
Best creep under the thorn, as it will keep you from harm.

Early humans may have believed that the lightning often hitting oaks and starting fires was from the 'angry gods' hurling bolts at the ground. From this belief it may have not taken much to perceive the oak as sacred, as an early provider of fire. Some stands of oak are also believed to have been the first sites of Pagan temples.

One of the most recognisable personifications of the great oak can be found in the 'Green Man'. He can be found throughout Europe in many guises, and has been seen further afield. The Green Man is often portrayed as a tree spirit, with wise eyes peering from a face represented by oak leaves, sometimes with saplings sprouting from the mouth, possibly as a symbol of fertility and fecundity. He is also known as 'Jack-o'-the-woods'.

The representation of the Green Man appears to have been absorbed by Christianity, as it can usually be seen somewhere in most old English churches. However, there is a theory that these images may have been carved by mischievous stone-masons, hiding a part of their Pagan worship in the house of Christian worship. Whichever it is, it is very common.

Possibly the most well-known oak is the 'Royal Oak', now synonymous with English public houses. It derives from the events after the battle of Worcester in 1651, when King Charles II and the Cavaliers were beaten by the Roundheads, and the King fled and hid in a large oak tree at Boscabel, Staffordshire. In 1660, he declared 29 May as Royal Oak day to celebrate the restoration of the monarchy. Children wore oak leaves or oak apples2 in their lapels. Anyone not wearing one could be kicked, punched or even thrashed with nettles. In some areas the associations appertaining to Royal Oak day have been absorbed into celebrations on May Day.

Another reason for worship of the oak is its fruit, known as acorns; these were relied on for sustenance, by both the people and their livestock. Even today, pigs are released in the New Forest, following an old tradition, called 'pannage' where commoners are still allowed to fatten their pigs for slaughter, traditionally carried out to tide the commoners over the winter. It should be noted that although pigs adore acorns, the leaves and acorns of oak trees are toxic to horses.

The main reason for the veneration of the oak tree was obviously the timber, which was very solid and strong, probably the strongest wood in Britain. The curved grain at the junction of branch and trunk was particularly useful, both as supports for roofs and in ship-building. Oaks also provided tannic acid for the leather trade.

The leaves have been used to make a decongestant, as an astringent and to control haemorrhages. If folklore is to be believed, the bark is good to relieve diarrhoea, rashes, frostbite and gastrointestinal catarrh. Preparations used include decoction, infusion, medicinal wine, poultice and tincture.

Truly a remarkable tree, and probably one worthy of its veneration!

1From rogare, Latin for 'beseech'.2Oak apples are a gall produced on oak leaves or twigs by a gall wasp, such as Amphibolips confluenta. The wasp lays an egg in the leaf or twig, causing the oak to produce a chemical that forms a protective structure around the egg. They don't appear to adversely affect the tree directly, although a heavy infestation may weaken it.