Kew Gardens' Important Trees: Turner's Oak - Quercus x turneri Content from the guide to life, the universe and everything 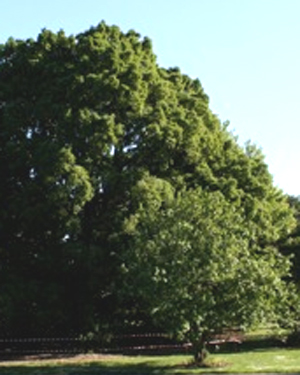 Turner's oak is one of Kew Gardens' Heritage trees and, like the Lucombe oak, was also a cross. It was created by a nurseryman, a Mr Turner of Essex, back in the late 18th Century by crossing the English oak - Quercus robur - with the Holm oak - Quercus ilex. It was planted in what was then a five-acre arboretum in Kew and is still there today at the rear of the Princess of Wales Conservatory. However it was not designated its current classification until 1880.

In the 1980s the tree was showing evidence of poor health. During the 'Great Storm' of 16 October, 1987, it was completely uprooted, lifted a few inches and deposited back on the same spot. This caused the health of the tree to improve markedly. It had been suffering due to compaction of the soil around its roots and this was cured by the uprooting. Kew is now actively using nitrogen gas to de-compact and aerate the root areas of many mature trees, as well as regular mulching from Britain's largest compost heap situated adjacent to the Pinetum (where it can be viewed from a special viewing platform) and injecting a 'soup' of mycorrhizal bacteria and fungi.

Turner's oak is similar to a Holm oak, being an evergreen. However it tends to lose its old leaves in the spring as new leaves appear. It is a small subspecies of Quercus, and has slim, serrated leaves, rather than the usual lobed leaves. It reaches a height of 15m, and can only be propagated by grafting. One peculiarity it has is low-lying, twisted branches which are a magnet for tree-climbing children, and no doubt certain adults!