Kew Gardens' Important Trees: Stone Pine - Pinus pinea Content from the guide to life, the universe and everything 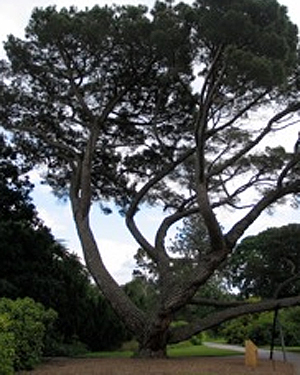 The stone, or umbrella, pine has been cultivated for over 2,000 years, but didn't get planted at Kew until 1846. It was part of the developments started by Sir William Jackson Hooker, Kew's first official director.

Although examples of this species can be found throughout the gardens, Kew's specimen tree can be found by the Duke's Garden, behind the grass garden by the Princess of Wales Conservatory. It is a peculiar shape as prior to open planting it had been pot-bound, causing it to be stunted like a bonsai tree. Many of its branches spread from the trunk low down. After a branch was lost in 1926 due to a heavy fall of snow, causing the tree to be lopsided and to start to lean to one side, many braces were placed under the lower branches to prevent them from tearing away from the tree.

Normal examples of this tree are usually 35m tall, with low extending branches and an umbrella-shaped canopy. The bark is distinctive, with broad, deep, black fissures running through it, forming thick, tough, red-brown outer bark. The needles are evergreen and last for around four years before being shed. The seed cones are ovoid to round and take seven years to mature. They are around 15cm long and have been compared to the design of Mills bombs (British WW2 hand grenades). It is from these cones that large winged 'nuts', up to 100 per cone, are shed, which are sold as 'pine nuts'. The tree originally grew in the Iberian peninsula1 but its natural range has never been ascertained; many of the stone pine colonies were man-made, as it was disseminated throughout the Mediterranean area.

The stone pine kernel is believed to have been used in prehistoric times, but has certainly been cultivated for 2,000 years, with evidence found at Pompeii, being preserved by the eruption of Mount Vesuvius in 79 AD. It was used for barter as well as nutrition. They were believed to be an aphrodisiac by the Romans, and are mentioned in the 4th Century 'Apicius' cookery book. The kernels are used in many ways, most notably in pesto, baklava and kibbeh. The nuts can be pressed to extract pine nut oil, which is used in the same way as other culinary oils. It has a mild, nutty flavour.

The resin, or sap, of the stone pine, like all pines, contains turpentine. This is an oleoresin. It had many uses and, prior to modern synthetic replacements, was often used in medicine. Here are listed some of those treatments:

Other major uses of resin that would be recognised domestically are as rosin (or colophony as it may also be known) used on violin bows, the soles of ballet shoes, some dance floors and stages to provide grip. It is also used in cabinet making and the furniture trade.

If there is one tree to see on a visit to Kew, we would recommend this one. It is a truly spectacular tree!

1Spain and Portugal.2A liquid rubbed on the body to relieve pains or sprains.