Kew Gardens' Important Trees: Oriental Plane - Platanus orientalis Content from the guide to life, the universe and everything 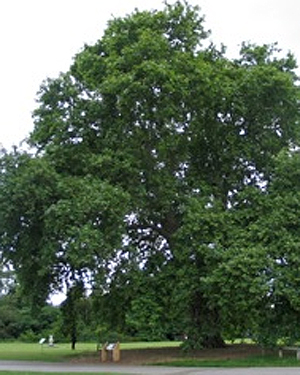 This plant is an 'Old Lion' of Kew Gardens and was planted in the original Arboretum in 1762. It probably came from the Duke of Argyll estate at Whitton. It is adjacent to the east wall of the former White House whose outline can be seen on the lawn in front of Kew Palace1. As with many oriental plants bought to Kew, its hardiness was unknown and so it was planted close to the White House wall to protect it. Records indicate it is the only survivor of three trees planted in a row.

The species was probably introduced into England around 1560 although there is some speculation of it arriving earlier. A marvellous example recorded in Ely, Cambridgeshire, in 1674 may possibly bear this out. It has a number of claims in history, being linked to Hindu holy places in Kashmir, and also as the tree under which Hippocrates sat when teaching at Kos.

It is a large tree with broad leaves. The English name 'plane' is a corruption of the Latin 'platanus', which is related to the Greek word 'platys' meaning 'broad', describing the leaves. The 'oriental' part of the name stems from its range, being from Eastern Europe to India. It prefers moist areas, preferably close to rivers, although it can survive dry periods once it is well established.

1This house was famously excavated in 72 hours by 'Time Team' in a Channel 4 television programme in the UK.