Kew Gardens' Important Trees: Sweet Chestnut - Castanea sativa Content from the guide to life, the universe and everything 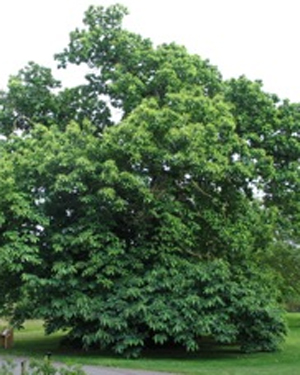 This tree is one of Kew's Heritage trees and is situated close to the Mediterranean Garden by the King William's Temple, between the Palm and Temperate greenhouses. It can be recognised by its large canopy, distinctive spiky leaves (oblong-lanceolate1 toothed leaves, as Tony Kirkham, Head of Kew's Arboretum, would call them), and ridged bark that curiously twists clockwise. The bole of the trunk is very gnarled and lumpy, due to the pollarding the tree has undergone in the past.

This tree is believed to be the oldest tree in Kew gardens, possibly planted in the late 17th or early 18th Century and is believed to be the remnant of an avenue of sweet chestnuts that led to Richmond Lodge which was occupied by George II. Sweet chestnuts were very popular trees at that time, many being planted by Queen Caroline's designer, Charles Bridgeman (1690-1738). He also assisted in the designs at Blenheim Palace, and a garden at Marble Hill. He specialised in a less rigid style of garden design than the formal Anglo-Dutch style of the day, hence the avenue of sweet chestnuts. The surrounding area would have been far less structured, probably not far off the layout of Kew gardens today. His ideas were later represented in the avenues radiating from the Great Pagoda, starting with the Japanese Cypress, Juniper and Yew Avenues created in 1867 followed by Thorn Avenue in 1868, Cedar Vista in 1871 (which still survives today), Acacia Avenue in 1872, Holly Walk in 1874 (which also survives) and Sweet Chestnut Avenue in 1880. Remnants from the original avenues still exist although the avenues themselves have disappeared, or have been forgotten.

The sweet chestnut was probably introduced into the United Kingdom by the Romans, possibly as a source of flour made from the chestnuts. It has a variety of names being Spanish, Portuguese or European chestnut. It is of a medium height, at around 20-35m with a girth of around 2m. Kew's specimen plant is easily in excess of that. It is mostly recognised by its round sharply-spiked lime-green nut cases. These contain from one to four nuts that are typically arched on one side and flat on the other. They are edible, being particularly popular at Christmas, either roasted or as a stuffing.

The chestnuts also have many other uses throughout Europe, including bread, flour, coffee substitute (used greatly during the wars) as well as confectionery and desserts. When pollarded, the wood is useful for fences and hurdles, being flexible and resistant to weathering. It is a light wood and when dried, is used for joinery and furniture, but has a tendency to split as it ages and dries out. Other traditional uses include barrels, chestnut paling fencing, flower trugs2, walking canes, timber cladding and shingles3.

There are other fine specimens of Sweet Chestnut throughout Kew, especially by the lake.

1A leaf shaped like a lance, being tapered to a point at each end.2A shallow, wooden basket used in gardening.3Wooden roof tiles.