Kew Gardens' Important Trees: North American Tulip Tree - Liriodendron tulipifera Content from the guide to life, the universe and everything 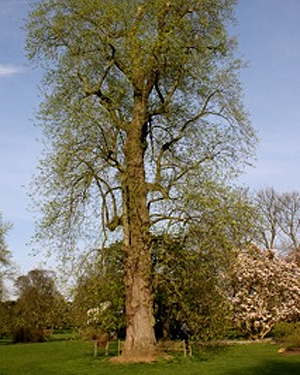 The North American tulip tree is one of Kew Gardens' Heritage trees. It is also known as the tulip poplar and the King of Magnolias. Specimens of this tree were first introduced into Britain from North America in 1688 and Kew's Heritage specimen was planted in the Gardens in about 1770; it is around 250 years old. It can be found in the Azalea Garden just off of the Princess Walk and may have been donated by John Tradescant the Younger, who introduced the plant into Kew, along with the yucca.

It can be found throughout eastern North America, from southern New England to North Florida, although there are concerns that it is becoming scarce in its natural environment. The Appalachian mountains and Piedmont area account between them for 75% of the species.

Apart from its ornamental aspect, with its yellow tulip-like flowers with orange markings, it is a very important hardwood. It is also known as the canoewood tree, as it was the preferred timber for boat building by the Native Americans in the Appalachian mountains. This is due to its size, growing to over 100 feet in height, and its very straight trunk. It may reach 300 years of age. As it is a hardwood, it is used for many wood-based products, and was, in the past, the preferred lumber for cabins. It is also known as whitewood as well as tulip, yellow or white poplar. It is the State tree of both Indiana and Tennessee, which shows its importance in the American psyche.

The flowers are distinctive, being an avocado-fleshy colour, with orange markings and large orange stamens. The fruit is cone-shaped and multilayered. The leaves are waxy, and 5 - 8 inches across in summer, turning a golden to clear yellow in autumn.

In close proximity to Kew's specimen Liriodendron tulipifera is an avenue of the related species, Liriodendron chinense. These were introduced by Ernest Wilson into Britain in 1901. The species is found in the Dabashan area of Sichuan, China but due to excessive felling by the timber trade it is becoming a very rare, threatened tree. Because of this, a team from Kew visited the area returning with a quantity of seeds which produced 28 trees. It is not as hardy as the Liriodendron tulipifera but is a fitting companion to the Heritage North American tulip tree.