Kew Gardens' Important Trees: False Acacia - Robinia pseudoacacia Content from the guide to life, the universe and everything 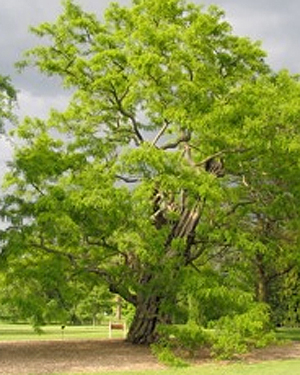 The false acacia, Robinia pseudoacacia, also known as the black locust tree, is an 'Old Lion' of Kew Gardens, being one of the original trees planted in the original arboretum in 1762.

The species was first introduced into the country in the 1640s by John Tradescant the Younger, a great and famous plant hunter from a very respected and recognised family. A native of the southeastern United States, it is now found widely throughout Europe, Asia and Southern Africa. Its title of false acacia may come from the thorns found at the base of young leaves, reaching close to an inch (2cm) in length. Also the leaves have a tendency to droop at night, appearing to close, similar to the acacia.

Despite its name of black locust tree, this tree has nothing to do with insects. The word locust in this case means the seed pod of the tree, which is said to resemble the grasshopper of the same name. John the Baptist, the prophet and cousin to Jesus Christ, was said to have lived in the desert on locusts and wild honey. In that case the locusts were probably the seeds of the Carob tree - Ceratonia siliqua. According to Kew Gardens' literature, the black locust tree provided John the Baptist's main nutrition while in the wilderness, but this cannot be true, as the tree was at that time confined to North America. Nevertheless, its seeds are similar to those that the hermit prophet would have eaten.

Kew's specimen tree was planted, with others, around the Temple of the Sun in the original botanic garden by the mother of George III, Princess Augusta, in 1759. It is situated close to the Princess of Wales Conservatory and, as can be guessed from its Old Lion status, is in close proximity to the other Lions, close to the maidenhair tree. It is heavily bound in iron hoops around its very distinguished trunk. The bark has the appearance of many trunks being fused together, being so deeply furrowed and gnarled. It also leans at a slight angle, a little like a dowager bent by her age. It is well suited to dry conditions and needs little moisture. Its leaves are well adapted to ensure the tree's survival, even if many of the leaves have drooped or fallen from the tree. It is a member of the Fabaceae or Legume1 family, with a height of 70 feet (52m) and a trunk of 6 feet (1.6m).

The tree is not so popular now, but in the early 1900s it was commonly used in shipbuilding, as recorded by William Cobbett, author of 'The English Gardener'. The change to iron in the shipbuilding industry seriously reduced the forestry trade, hastening the demise of this plant, amongst many others.

However, it is still prized as firewood for wood-burning stoves, as it burns slowly with little in the way of smoke or flame, but a high heat content.

1A plant which has bacteria living in nodules on the roots. These are able to extract nitrogen from the air in the soil, that is normally inaccessible to plants, and convert it into useable compounds.