Kew Gardens' Important Trees: Pagoda Tree - Styphnolobium japonicum Content from the guide to life, the universe and everything 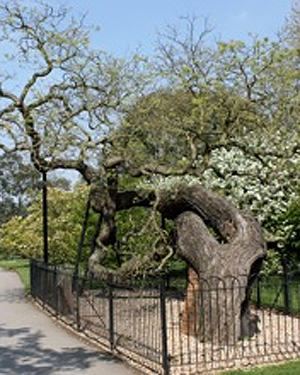 The Pagoda tree – Styphnolobium japonicum  – is one of Kew's 'Old Lions', the five trees remaining from the original five-acre arboretum. Most of these came from the Duke of Argyll's Whitton arboretum, planted by William Aiton around 1702.

The first specimen of the species to be identified came from a plant that had been cultivated in Japan. It was introduced into Britain by James Gordon1 in 1653, and is situated by the winter garden and ice house, close to the Princess of Wales Conservatory. The specimen tree is very distinctive as, unlike others of the species, it does not grow vertically but is actually horizontal, being supported by massive steel cupped braces and a brick 'wall' at the base of the trunk. Despite its apparent precarious growing stance, it still blooms with creamy white flowers and comes into leaf, much to the delight of Kew's visitors.

The species is known as the Chinese scholar tree or Buddhist tree, possibly as it was often to be found in Buddhist temples. The japonicum of the name is actually a misnomer, as it is a native of China and not of Japan at all. It generally grows to 25m in height, although the Kew specimen doesn't reach this height due to its horizontal position. The leaves are pinnate2, with anything from 9 to 21 leaflets, with pendulous flowers.

Apart from being an ornamental plant, it is also popular for use in bonsai. The timber is used for both construction and furniture. The seed pods produce grey and yellow dyes, often used in both the native batik and silk businesses. The leaves and flowers are also edible, although the seeds are poisonous. Medicinally, the flower buds are used both as an astringent and as a coagulant.

There are actually two species of Pagoda Tree, and they appear identical. Kew's Pagoda Tree was originally classified as Sophora japonica in the Fabaceae or Legume family. A feature of Legumes is that they have 'rhizobia', nitrogen-fixing3 nodules, on their roots. It was noticed, however, that some Pagoda trees do not have functioning rhizobia and do not fix nitrogen. The Pagoda trees were then separated into two distinct species within the legume family: Sophora japonica, as a nitrogen fixer, and Styphnolobium japonicum, a non-nitrogen fixer. The Kew specimen is a member of the latter species.

1James Gordon established a nursery at Mile End, London and a seed shop in Fenchurch Street, London, with specimens from most areas of the known world.2The leaves resemble feathers arranged on each side of a common stem.3'Nitrogen fixing' is the extraction of normally inert nitrogen from the air in the soil and incorporating it into chemical compounds.