Kew Gardens' Important Trees: Corsican Pine - Pinus nigra laricio Content from the guide to life, the universe and everything 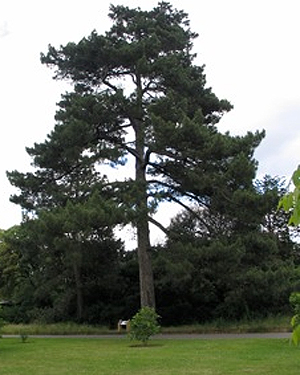 The Corsican pine is one of Kew Gardens' Heritage trees and is situated near the main gate. The tree is a variety of Austrian pine. It was probably planted in 1814, when it was brought from the South of France by the biologist RA Salisbury. Its location is where the first Pinetum (pine) collection was originally created. It is believed to be the oldest of its species in the country.

The tree hasn't had a trouble-free life, however. The crown was hit by a light aircraft in the early part of the 20th Century and it also suffered at least two recorded lightning strikes, badly scarring the trunk, of which the last was in 1992. This danger can be catastrophic in pines. The resin reaches boiling point in seconds causing the timber to explode, showering the area with burning resin creating forest fires. These can be devastating, especially where highly flammable pine needles have accumulated over time. It is for this reason that many areas of pine forest now have controlled burn-offs to prevent this, often to the benefit of the flora and fauna of the area. So this tree has had a number of miraculous escapes.

This evergreen tree species, as its name indicates, is found in Corsica and is a member of the black (nigra) pine family. There are other variants such as the calibrica and maritima varieties. The plant can rapidly grow to 30m in height, flowering during May and June with its cones opening in October. Its main distinguishing feature is its silvery bark with deep dark fissures running through it. It is valued as a timber tree, as its wood is virtually knot-free and is used for pit-props, plywood and general building work.

Turpentine, a paint thinner and solvent, is manufactured from the leaves and resin, primarily because they contain terpene (C10H16) and oleoresins. Turpentine is also used medicinally as an antiseptic, diuretic and for respiratory ailments, as well as a rub for joint complaints. The plant produces large quantities of resin, which is tapped from the trunk. This resin is used in the manufacture of sealing wax, varnishes, wood preservatives and particularly, in the form of a solid block known as 'rosin', by musicians who play bowed, stringed instruments such as violins and cellos. Rosin applied to the horsehair of the bow creates friction with the instrument's strings, causing them to vibrate and make a sound.

So, the Corsican pine is certainly a special and interesting tree.