Cellos Content from the guide to life, the universe and everything 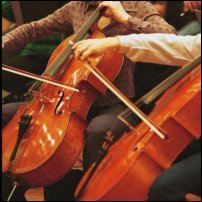 The cello is a large stringed instrument which is one of the mainstays of the modern orchestra. It is the biggest member of the viola family, which consists of the violin, viola and cello. Together with the double bass1, these make up the string section of the orchestra. The cello looks just like a very large violin, has four metal strings and is played in the same way, by stroking the strings with a horse-hair bow. Due to its size, however, it is played with the instrument held more or less vertically between the player's knees. There is a metal spike at the end called the 'end pin' which rests on the ground.

The original name of the cello was violoncello (literally, 'little big viola') which shows its relation to the violin and viola, and the name is still sometimes written as 'cello to show the missing violon- at the start. Cello players are called cellists, rather than celloists.

The cello is tuned the same as the viola but an octave lower in pitch. It is the bass of the viola family, while the viola and violin are alto and soprano2.

The 16th Century cello makers of the city of Cremona, Italy, produced wonderful instruments, unrivalled even today. The names Amati, Guarneri and Stradivari are still well known, though more often for their violins than their cellos. There have been very few changes to the basic design of cello since that time.

Chamber music also kept the cello as an essential member. The pinnacle of chamber music is reckoned to be the musical form known as the string quartet. This consists of two violins, a viola and a cello. The cello is also used in chamber music with various other combinations, such as cello and flute.

The cello is very rare outside of classical music.

The cello is played very similarly to the violin. There are some differences, some obvious, some not so obvious:

The cello has a harmony role in almost all classical music. In addition, there is a vast range of music where the instrument takes a more prominent role, either as a solo instrument or in a quartet.

1The double bass belongs to a different family of instruments, the viol or viola da gamba family.2The missing tenor part used to be supplied by an instrument called the tenor violin, but this is no longer used.