Kew Gardens' Important Trees: The Lucombe Oak - Quercus x hispanica 'lucombeana' Content from the guide to life, the universe and everything 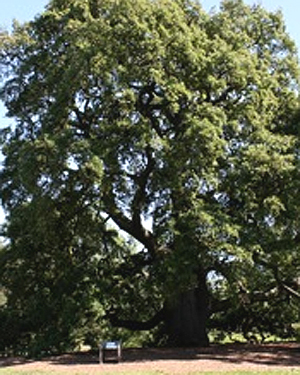 The Lucombe oak is one of Kew Gardens' Heritage trees and was initially raised by William Lucombe1, a nurseryman in St Thomas, Exeter, in 1762. He had noted that one of his Turkey oak saplings was non-deciduous and discovered it was a cross between a Turkey oak - Quercus cerris - and a Cork oak - Quercus suber. From this original sapling he grew new saplings, one of which is believed to have been planted at Kew in 1773; it may well have been one of the first to be planted outside Devon. The crossing fruits well, but the resultant acorns can produce varying plants. All true Lucombe oaks are clones of the original tree, but there are many Quercus cerris x Quercus suber hybrids mistakenly called Lucombe oaks.

Kew's Lucombe oak was uprooted and transplanted in 1846, being moved no less than 20 metres, on a cart pulled by four horses, to its present site which is close to the Rose Garden behind the Palm House. This move was necessary to take it out of the path of landscape designer William Andrews Nesfield's proposed Syon Vista.

The European Turkey oak - Quercus cerris - gains its name from one of its native source countries. It was introduced to Britain in 1735 as a substitute timber for the English oak - Quercus robur - which was, at that time, the main timber provision. However, it proved disappointing, with its wood being poor quality and brittle and only being good for panelling, gaining it its other name of 'Wainscot oak'2. The tree's popularity stemmed from its fast growth, adaptability and strange, mossy acorn cups, or more correctly, cupules. It grows to a height and spread of 30m.

The Cork oak - Quercus suber - is a medium-sized evergreen oak native to Southwest Europe. It grows to 20m in height and the leaves are thick and leathery to allow for the parched regions it grows in. The most distinctive feature of the tree is its thick, rugged, spongy bark, or cork. The cork is believed to be a protection against forest fires, as cork is known for its low flammability, just smouldering, rather than burning.

It is this cork that made this tree so popular, with the bark being harvested every 10 to 12 years primarily to make corks for the wine trade. The trees are most common in the biggest wine producing countries, France, Italy, Spain, and especially Portugal. The cork industry produces in excess of 250,000 tonnes each year, a vast quantity considering how light cork is.

The harvesting of cork has actually greatly benefited conservation in the Iberian peninsula. Unfortunately, wine corks are not ideally suited to the function they serve - mould growing on the corks destroy 10% of the produce. The wine industry's response in recent years is the adoption of plastic corks and screw-top wine bottles. The reduction in the use of real cork is now threatening the habitat of species such as the rare Iberian lynx3, black stork and booted eagles, all of which only live in cork forests. This land is so nutrient-poor it will not support agriculture and so many environmental organisations are campaigning for the continued use of cork to maintain the environment and the industry. This is unlikely to be accepted by the wine industry.

As a point of interest, the largest Lucombe oak in the world was in Phear Park in Devon. Unfortunately in February 2009, the 200-year-old tree blew down. At that point it had a girth of almost 8 metres and had been awarded the status of 'champion' by the Tree Register of Great Britain and Ireland. Champion trees are those recorded as the tallest, oldest or most massive example of their kind known in a given region. The current Champion Lucombe oak is in the gardens of Powis Castle, Wales.

1Lucombe grew so attached to the first of these trees that he had it chopped down, so that his coffin could be made from its wood when he died. He kept the boards under his bed but when he died, the damp had rotted the timbers. Another batch had to be sourced from one of his trees. To quote an article from Royal Botanical Gardens, Kew... 'showing that Lucombe knew more about growing trees than preserving them'.2'Wainscot', from the Middle Low German wagenschot (wagon panelling), was a name for any fine oak used for panelling - originally on wagons and later the panelling on interior walls, rising 3-5 feet (900 to 1,500mm) from the floor to the dado rail.3The Iberian lynx is the rarest of the world's 36 species of cat (with only 100 viable males, compared to 8,000 tigers) which are split between Donana, with 25-30 adults, and Andujar-Cardena in the Sierra Morena with 80 viable adults, in Andalusia. The biggest worry is that there appear to be only 30 mature, fertile females!