Corks Content from the guide to life, the universe and everything 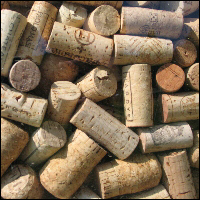 Anybody who drinks wine is familiar with the popping sound of a cork being removed. Corks are those cylindrical things which keep the wine in the bottle. However, most of us don't give a moment to consider where those little corks come from or why we use them.

Where Do Corks Come from?

There are two types of cork: the new-fangled plastic variety and the traditional one made from that spongy stuff known as cork. Cork is actually the bark of a tree called the cork oak (Quercus suber). These grow in plantations, mainly in Portugal and Spain. The bark is stripped off the tree and used to make the corks. This does not damage the tree, as it regrows new bark. After nine years, it has recovered enough to be stripped again. A mature tree can produce 200kg of cork every nine years for as long as 200 years. The trees are so accustomed to having their bark stripped that they have serious problems if the bark is not removed.

Normal corks are just cylinders cut from the bark. Sparkling wine corks are much more complicated. They have to be much stronger so that they can withstand the pressure of all those bubbles. They are also cylinders, but much wider and the cork is layered to provide extra strength. The cork is compressed laterally before being inserted into the bottle, but it retains a sense of its original shape, apparent in the familiar mushroom shaped heads of such corks.

How Do Corks Work?

Natural cork is a material with an unusual property: it does not expand laterally when it is compressed. This means that a cork stays more or less the same width when it is squashed lengthways, making it possible to push it into the bottle neck. Most materials swell outwards as they are compressed, so they would jam in the neck. There's just enough outward expansion in a cork to make a good seal. Technically speaking, cork has a Poisson's Ratio very close to zero, which is just a more obtuse, scientific way of saying the same thing.

Although corks made of cork are considered the sign of traditional values and quality, they have a major problem. About 5-8% of wine bottles are tainted with a chemical called trichloroanisole (TCA for short). This comes from the cork, but nobody seems to have a definitive conclusion as to why this taint comes about1 . Such wine is known as 'corked'. In small amounts, it can make the wine taste flat and flavourless. In larger amounts, it has an obnoxious musty taste likened to wet carpets, which makes the wine undrinkable. Obviously, this is a major problem for wine manufacturers, since they must bear the cost of 8% of their wine being undrinkable.

Corked wine is the reason for the little ritual in restaurants, where one person is asked to taste the wine. Don't worry, if the wine is corked, you will know! Send it back and get another.

The solution to the problem of corked wine is to use corks made of plastic. These are becoming increasingly popular with wine manufacturers, since they do not suffer from the problem of TCA. Unfortunately, they have a very negative image with the wine-buying public. A good wine is a treat for which you pay a good price. People like the idea of tradition when buying a good wine - the image of an old man caring for his vats of wine is a common one in advertising. Plastic corks suggest cheap mass production in steel drums, which puts people off. But wines with plastic corks are in fact more likely to be drinkable. It will be a while yet before the plastic cork is accepted and the true benefits fully realised.

A few points against plastic corks:

Things to Do with a Cork

Many people each year injure their eyes while gardening. They place sticks and canes into the ground, and later poke their eyes on the sticks, because they don't see them. A highly recommended solution to this is to put a cork on the top of each stick, ideally a sparkling wine cork. You will then notice the stick, and even if you do hit your eye on it, it is unlikely to do any damage.

Since corks float, you can make little toy boats from them. Cut the cork in half lengthways. Insert a long screw into the curved side to act as a keel. The weight of this will keep the cork upright. Add a sail using a cocktail stick and a piece of paper.

This piece of sleight of hand is hard to describe, but if you persevere with these instructions, you can really impress or bore your friends, depending on your skill and panache. All you need is two corks.

Place a cork in each hand in the crook between thumb and hand. Grasp the ends of each cork with the thumb and index finger of the opposite hand. Pull your hands apart. The two corks will collide, as you would expect.

Now repeat the process, but with a slight difference. Hold the corks between thumb and hand as before. Turn your left hand palm downwards, your right hand palm upwards. Place each thumb on the end of the cork in the other hand. Bend each index finger around the thumb of the other hand so that it touches the other end of the cork. You are now holding the two corks between thumb and index finger. Pull your hands apart. The two corks should come out cleanly, leaving you with a cork in each hand. Impressive!

With practise you can perform this trick without turning your hands very much, so it is not at all obvious what you are doing. Most people are unable to understand it even when it is done right in front of them in slow motion!

If you are throwing out an old blade such as a razor blade or the blade of a Stanley knife, you can push it into a cork first to make it safe. This means you won't slice yourself open later when pushing more rubbish into the bin.

Burnt cork makes an excellent black substance which can be used for painting false mustaches on yourself and your friends. Using burnt cork like this will find you in good company, as Groucho Marx, that eminent comedian, went through life wearing a painted-on moustache.

A cork can make a fine impromptu door-stopper.

You can hang corks from the brim of your hat to keep the flies off, like the stereotypical view of an outback Australian. This is likely to make you look like a prat in a hat, unless you really are an Australian.

1After considerable research, scientists have tracked the cause down to a few possible sources including infection of the cork bark in the forest by a fungus called 'Yellow Stain' and the action of certain moulds on the cork which convert Trichlorophenol (or TCP) to TCA. This TCP comes from the use of chlorinated compounds in the cork washing process.2Small thin sticks sharpened at both ends.