A Wander Through Exeter Content from the guide to life, the universe and everything 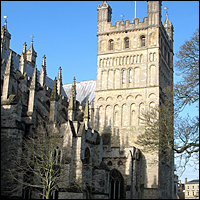 Exeter, on the river Exe in Devon, England, is thought to have Celtic origins, and was settled by the Romans in 46 AD. Parts of the original city wall, built in the Roman period, are still visible, and the Fosse Way begins at Exeter, calling at Bath, Cirencester, Leicester and ending at Lincoln some 370km later. Scattered around its Norman cathedral are several small churches, built from the local sandstone, which are also worth a look.

This is a wander in the streets around St Peter's Cathedral, looking at some of the buildings and public art, and not noticing the many lampposts.

You can view some photographs to accompany this Entry here.

By 380 AD Roman occupation had ended, leaving the Britons to introduce bends into the roads. Several hundred years later Saxons had arrived from Germany, followed by Danes and later by Normans who founded St Peter's Cathedral around 1050 and completed it by 1180. This is constructed mainly from Beer limestone1. Some Purbeck marble is also used inside.

The cathedral was partially rebuilt in the 14th Century in the then fashionable Gothic style while retaining the original twin Norman towers.

The predominant local building material is Heavitree sandstone. Many of the older buildings, including the Roman wall and the nearby Rougemont castle, are constructed from this material. Rougemont takes its name from the red hill under the streets of Exeter. This sits on a volcanic plug, and shows little signs of movement, thankfully.

On entering Cathedral Close (mentioned in Bram Stoker's Dracula) from Southernhay, which is a fine Georgian terrace and boulevard, the cathedral is glimpsed above a wall on the left, just beyond the iron bridge over the road. An inscription on the bridge reads: Burnet Patch Esq. Mayor 1854 R. Trewman Esq. Receiver.

On the right, opposite the cathedral green, is a row of old buildings, fronting the Tudor road. The second building has a wooden door under a Norman arch. This opens to reveal an inner courtyard and another old door into the building, which was built for priests, called Annuellars, as a residential college. You will note the use of Heavitree sandstone in the walls and doorways. This was quarried close by, in what is now Northernhay Gardens, and used originally by the Romans for the city wall.

A little further along on the right is The Devon and Exeter Institution, opened in 1813, to promote the arts and sciences in the West Country, and which now houses a library of over 40,000 volumes, administered as part of Exeter University library2. A sun clock adorns the front wall and two solar lanterns on the roof are a source of light into the building as well as a handy perch for seagulls. In former times this was the town house of the Courtenay family, of Powderham castle fame. It has had several facelifts in its time, and the current Georgian frontage is topped with a mock Tudor frieze.

Further along is an imposing white building with a large coat of arms on the front, and a Dutch-style gable, a later addition, with a balcony overlooking the green. This adjoins St Martin's church with its distinctive tower. The building with the coat of arms, and dated 1596, used to be the Customs House, a source of tax revenue, which later moved to Exeter Quay 120 years after the world's first lock-gated canal opened in 1563. Following relocation of the Customs House, since around 1680, the building has been adapted for many different uses, most famously as Mol's coffee house, after which it is currently named. The distinctive windows on the upper floors contain 230 panes of glass and allowed much light into the rooms, which were used as an artist's studio by John Gendall, an Exeter-born artist and lithographer, for 30 years from 1834, after Mol moved on to higher things.

A School of Art was established nearby in 1854, and is thought to be a founding institution of Exeter University. It was aided and encouraged by Gendall, who also became the first curator of Exeter's museum (Royal Albert Memorial Museum), currently closed for major refurbishment3. Some believe that the RAMM was the catalyst for the creation of the University while others believe it was the establishment of a School of Science after the Great Exhibition in 18514. However, the University of Exeter did not receive its charter until 1955.

Gendall also contributed to Thomas Shapter's work on cholera. Physician Shapter published his book in 1848, which analysed the way the disease had spread in Exeter in an outbreak in 1832, and was influential in the subsequent discovery that the disease is water-borne by the London physician John Snow in 1854. This discovery led to the development of waste water treatment plants on a massive scale throughout the country, and was the first practical result from the new medical science of epidemiology.

By Mol's on the corner of Cathedral Yard is the former Royal Clarence Hotel, famous these days for a one-armed chef who collects Michelin 'stars'. It was the first hotel, so named as a hotel, in the country, but is now a hotel and restaurant called ABode - yes, ABode.

Having passed the front of St Martin's church, consecrated in 1065, turn right into Catherine Street, noting St Martin's tower and its unusual colour and shape, reminiscent of a Tuscan country church with its stucco coat of pale pink. Rapunzel could have practised here.

This street is named after St Catherine's Chapel and Almshouses, founded in 1457, which were destroyed in 19425. The remains have been retained as a memorial, and enhanced with some glass and metal sculptures called Marking Time. These are Gothic arch-shaped panels embedded with pieces of medieval pottery and glass. There are also several flagstones with engravings reproduced from the almshouse records, including this one:

Saturday the Twenty Ninth Day of June, 1771 They gave to Mary Grant One Shilling and to Eighteen Poor People a Two Penny Loaf Each.

On the left, opposite St Catherine's, is one side of St Stephen's, which we shall visit again later.

At the end of Catherine Street is Bedford Street. The name is all that remains of Bedford Circus, also destroyed in 1942, created by the Duke of Bedford, of Tavistock fame. This has been replaced by a 21st Century shopping mall with glass-covered walkways, interspersed with some public art to provide relief from the architectural exuberance that is the Princesshay mall. Notable are the Exeter Traceries, a group of six glass sculptures on a glass-fronted building in front of which are arranged several Glow Stones, also made from glass. These provide seating for pedestrians to enjoy another view of the cathedral, which towers beyond the roof of the Devon and Exeter Institution.

Around the corner, towards Southernhay (the street), is part of the Roman-built city wall, now a home for moss and other native plant-life that enjoys challenging growing situations.

Retrace your steps back along Bedford Street to the High Street and turn left.

Although largely rebuilt in the 1950s, the High Street contains a few gems from an older period. On the left is St Stephen's church (again), which is of Saxon origin, and now used for the taking of refreshments.

Opposite are two Elizabethan facades with fine windows and decorated gables. The rest of the buildings were replaced after firestorms. Further on down the street, on the right, is the Guildhall. This served Exeter as its focal point for civic, political and legal life for 800 years and was the scene of violent protest and hangings. Nowadays it is used for ceremonial occasions and exhibitions, with more subdued emotive responses. Behind is the Guildhall shopping centre, which surrounds St Pancras' church, first recorded in 1191. It is probably one of the smallest churches in the world being only 14m long and 5m wide. The church has Saxon remnants and a bell inscribed in Latin, which reads,

I may be small, nevertheless I am heard over a wide distance

Just past the Guildhall is Parliament Street, claimed to be the narrowest street in the world, with a width of less than 100cm. No one lives in the street because flat-pack furniture came too late.

On the corner of South Street and High Street is St Petrock's church, almost opposite Parliament Street. It has a distinctive octagonal tower and may be the oldest church in Exeter, possibly being founded in the 6th Century. The tower is home to a peal of six bells. St Petroc, the name used by the Dumnonia in pre-Roman Britain, had a flag which is now used as the flag of Devon.

Passing to the left of St Petrock's, down Broadgate, Cathedral Yard and St Peter's Cathedral lie ahead.

Cathedral Yard is the western boundary of the green, which surrounds St Peter's Cathedral. Ahead is the west front of the cathedral, made from Beer limestone, and decorated with the statues of around 50 saints.

The area around the cathedral became a centre of worship in Saxon times. There is evidence of Saxon Christian burials in Cathedral Yard on the grassy area close to the Devon War Memorial. The foundations of a monastery, which was established in the late 7th Century, were found here. The Crediton-born St Boniface, the patron saint of Germany, was educated at the monastery in 680 AD.

By about 1,000 AD, Exeter was the sixth most prosperous city in Britain. It continued to grow, with tin as the basis of the city's wealth, mined on nearby Dartmoor. Exports of wool also fuelled further growth in trade via the port at Topsham. The city had as many as 30 churches, none attached to a Parish, and Preston Street, or street of priests, was just that!

Inside the cathedral is an old volume, known as the Exeter Book, which contains an anthology of Anglo-Saxon poetry from the 10th Century. One of the poems, entitled The Wanderer inspired a poem by Tolkien in his The Two Towers. This is the section from The Wanderer:

It could describe a wander around an old cathedral.

1Limestone from Beer in Devon is used in 24 cathedrals throughout the country, including Westminster Abbey and although not as dense as the limestone imported from Caen in France, it can be used where very fine detailing is not needed.2 Bizarrely Exeter is also home to elements of Plymouth University with which it jointly runs The Peninsula Medical School.3Expected to be reopened in 20114The exhibition went on to make enormous profits that are still used to fund academic research and scholarships, in addition to paying for building The Royal Albert Hall, Imperial College and several major museums in South Kensington. Thank you Prince Albert!5The Exeter Blitz is described in the Carnegie medal-winning book by David Rees.