Beer, Devon, UK Content from the guide to life, the universe and everything 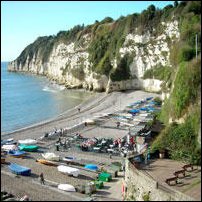 Beer is my favourite Devon village. It only changes for the better - the people are friendly - the walks are wonderful - crab sandwiches and home-made fruit pie with clotted cream eaten on the beach watching the fishing boats coming in is my idea of heaven!
- A contributor to BBC Devon's 'Wish You Were Here', managing to squeeze almost every Devon cliché into one happy sentence.

Beer is a small village on the southern coast of Devon, itself in the south-west of the UK. Nestling in a valley above a rocky cove, it never quite seems to be over-run with tourists and maintains a quiet, relaxed and unspoilt air.

It has fishing boats and deckchairs on the pebble beach, a beautiful stream running either side of the quiet main street, and arguably one of the friendliest welcomes in Devon. Welcome to Beer!

What Can I do There?

The village is built around a very pretty cove, and the pebble beach is home to a small, brightly-painted fishing fleet and a few beach huts, whose owners will gladly sell some of their catch. Unsurprisingly, the pubs and restaurants proudly offer a whole range of dishes made from local seafood - manna from heaven for fish lovers. Fishing trips can also be arranged locally.

You can get great views of the cove by taking a quick stroll along the South West Coast Path, which rises steeply from the village to the east and west. The cliffs here are part of the 'Jurassic Coast', a section of coastline composed from rocks that were laid down over 70 million years ago. The rock around Beer is quite special; whereas chalk has been eroded easily elsewhere on the Jurassic Coast, here it has been folded behind older rocks1 and has survived. These are the westernmost chalk cliffs on the English Channel, making the area clearly visible from as far away as Brixham on a clear day. To the west, the coast path takes in the 426 foot (130m) high Beer Head, which commands great views all the way from Start Point to Portland. Ten guns were stationed here during the Napoleonic Wars, before a rockfall sent them crashing into the Channel. The village of Branscombe is a short but demanding walk away, taking in the sensational 'Hooken Undercliff' - not to be missed. To the east from Beer, a shorter and easier walk leads to the town of Seaton.

You could also visit Beer Quarry Caves. It is easy to work Beer stone into fine detail, but it also begins to harden on contact with the air, and these attributes have made it popular with artisans since Roman times. It was used in the construction of 24 cathedrals, including St Paul's in London and Exeter Cathedral, as well as being used in Windsor Castle, the Tower of London and Westminster Abbey. The caves are open from Easter to October for guided tours. If you're not familiar with the area (and perhaps even if you are) it's worth asking in the village for directions, as the caves can be a little tricky to find!

It would be very appropriate for you to have a beer while in Beer. Fortunately, the local hostelries - the Dolphin Hotel, Anchor Inn and Barrel O' Beer - are very friendly and have good selections of drinks. From the Anchor's beer garden, you can look out at the cove and reflect on the fact that the allotments behind you were once an Abbot's vineyard! The off-licence here is a treat, with just a small choice of multinational drinks and a frankly baffling selection of scrumpies and local fruit wines.

Just a short distance out of town, Pecorama is a very popular attraction, especially for railway enthusiasts. It houses an indoor model railway exhibition, extensive gardens and the Beer Heights Light Railway, as well as the usual crazy golf and children's play areas.

Wish You Were Here!

We were in Beer for a week only last year, and spent a fortnight there two years previously. We love its homely atmosphere, and have walked the steep path through to Seaton and had lunch there before walking back. We also walked west, over the top to Branscombe and had a fish dinner in that café just over the stream bridge. We like to climb the coastal hills. The weather was gorgeous, with a light sea breeze. Fellow climbers, whether they know each other or not, often stop to share their appreciation of this beautiful Devon spot!
We also like to walk around the Beer shops, and watch the local artists painting their sea views, for sale or for pleasure. What is unusual is the way the beach stall owners run out those long 'carpets' over the shore pebbles and arrange the deck chairs in neat lines and rows. The facilities are clean and bright. We have been to many Dorset, Devon and Cornwall resorts over the years, but Beer remains a favourite.
- An h2g2 Researcher.

Some snippets of useless information:

And when you've had enough of Beer, you could always pop to Looe!

1Shown well in this photo.