The Deckchair Content from the guide to life, the universe and everything 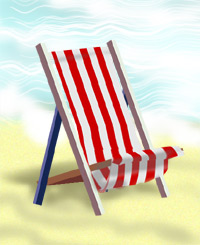 A deckchair is a folding chair with a fabric or vinyl back and seat. It may have armrests and even leg rests and can be found either on board ships or at the beach. Its purpose is for lounging, although aiding sunburn and collecting guano seem to occur at the same time. When visiting beaches in England and indeed most pleasure beaches worldwide, you cannot help but notice row upon row of deckchairs.

The first chairs of this type - that is, the folding X-type - were discovered in the tombs of the ancient Egyptians, often carved with animal forms and covered with whole animal skins. There are also references to folding chairs in 17th Century inventories; 'Six folding chaires of crimson vellvet trymmed with gold lace' were sold by order of the Council of State after the execution of Charles I.

The now widely-used term 'deckchair' derived from the practice (normally by non-sailing types) of sitting on deck of a ship, in the belief that the inhalation of salt-rich sea air was beneficial to health. These new 'deck' chairs were originally used as seating on passenger liners and it is unclear whether they originated in the Americas or in the British Isles. It's probable that the wealthy American class of traveller brought deckchairs into vogue when steaming over the pond and they were quickly introduced onto P&O1 cruise-ships during the late 1880s. The deckchair was soon commonplace on most passenger liners like the White Star Lines RMS Titanic2 and retains place of prominence on board cruise-ships today.

Earlier models of the chairs were made of two wooden rectangles hinged together with a third rectangle forming a delta-shaped frame, once erect. A rectangular piece of canvas, invariably mottled olive green in colour, would be attached to two of the wooden rectangles providing a means of support for a human bottom. These models were impossible to erect without doing serious damage to fingers, unless you had a very mathematical mind.

John Thomas Moore (1864-1929) took out a patent for adjustable folding chairs in 1886 and manufactured them in Macclesfield, England from 1887. The Waverley model was described as 'the best ship or lawn tennis chair', while the Hygienic was a rocking chair - 'valuable for those with sluggish and constipated bowels. Its action is perfect massage without the toilsome labour'. These portable and erectable folding chairs became popular and it was inevitable that the deckchair soon crept from its place aboard ship onto piers, beaches and promenades along seaside resorts.

The Deckchair in England

Until the advent of the deckchair in England, beach-goers often paid 1d (one old penny3) for the privilege of parking their bottoms on wooden benches dotted sparingly along the coastline. Beach deckchairs soon became popular and various sorts were sold and rented to holiday makers.

Rental cost of a deckchair up until the advent of decimal currency in the UK was generally around 3d (three old pennies) for the day. Deckchair concierges, attired much like bus conductors, strode up and down promenades taking money from lobster-red sunbathers. However, from the 1970s onwards, inflation pushed prices from as low as 5p (five pence) an hour to as much as £2 (two pounds) per hour at the turn of the 21st Century, when the job of deckchair concierge started to fade into obscurity. In some places, when hiring a beach-hut4, an assortment of older wood and canvas deckchairs was thrown in to sweeten the deal. With the availability of more portable seating (both fold-up and inflatable), holiday makers now often bring their own beach furniture, leaving deckchairs largely empty and barren along English coastlines.

Modern models now come in a wide range of rust-attracting metal, with nylon 'bottom hammocks' commonly green in colour. These models are (to the untutored) supposedly easier to erect, but the metallic quality of the chair led to a sharp rise in the number of related injuries5. A deckchair can be dangerous, causing frequent summertime injuries to adults and children. Sometimes older deckchairs can lead to lower back pain and sore buttocks when threadbare canvas finally rips away from wooden frames, leaving occupants lying on the ground amid debris and surrounding laughter. Other, plastic variants of deckchair can lead to excessive skin irritation, a truly remarkable build up of static electricity and lashings of stale sweat around the buttocks on a hot day.

Generally seen in the summertime and found upon beaches or at cricket matches, the common deckchair is a simple affair made up of sturdy wood and hardy canvas (usually green or green and white pinstripes6). Deckchairs appear to collect other significant markings, perhaps its age can be determined not only by counting the number of stains upon the canvas from greasy hot-chips, seagull guano and spilt ice cream, but also the smoothness of the canvas in the seating area and the creak of wood as weight is applied by an occupant.

It is rare to see an original deckchair in its natural habitat as intended, however visits to the seaside resorts of Brighton, Hove and Skegness in England are a must to spot this increasingly elusive cultural icon. Other lesser haunts include Hastings, Blackpool and the Isle of Wight.

1The Peninsular and Oriental Steam Navigation Company was a shipping company that began cruises to Egypt, India, the Orient, and Australasia in the late 1840s.2Hence the old saying about 'rearranging deckchairs on the Titanic'.3One old penny equates to 0.42 new pence (12d=1s=5p).4Sometimes these beach-huts were referred to as 'chalets' in more affluent resort towns.5It's no joke - see 'Deck-chairs: putting a finger on the problem, rather than in it' by McGuiness et al in Injury 1994 Dec;25(10):635-6, the official journal of the British Trauma Society.6Some sporting teams enjoy parading their players in colourful uniforms, sometimes unfavourably referred to as 'deckchair' due to the garish choice of hues and stripes.