The Evolution of the Frisbee Content from the guide to life, the universe and everything 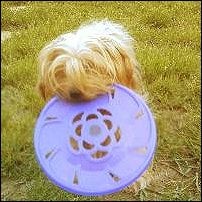 The Frisbee is an item and a sport that has become known to human beings a relatively short while ago, although people have no doubt been throwing similarly shaped objects since the humble plate was invented.

The Frisbee is a circular flying disc, not unlike a UFO, or a plate. In fact, the Frisbee is actually modelled after a pie pan from the late 19th Century, originating in Connecticut. The pies were sold by William Russell Frisbie of the Frisbie Pie Company, and were much loved by students of a certain nearby college. The students would often throw around the pie pans in a fun game of 'catch'. They did of course eat the pies before they threw the pans around, as the other way created too much of a mess. Soon pie tins were being thrown all around America, causing severe pain to all who caught them.

In 1947 a man called Fred Morrison decided a plastic version would be less painful, and with his then business partner Warren Franscioni invented the first plastic flying disk, which was called the Flyin' Saucer. By the mid-fifties, the internationally seriously-respected company WHAM-O! picked up the patent, and while looking for a new name to launch their product with, heard the story of Frisbie's pie tins, and from then on, new plastic flying discs were marketed as 'Frisbees' around the world.

What makes Frisbees so remarkable and altogether groovy is that they fly a very long way with minimal effort. This is all down to their excellent aerodynamics, which require the Frisbee to be moving with velocity and spin.

The modern Frisbee has sloped or rounded edges. Holding the Frisbee flat at eye level shows an outline that resembles an aeroplane wing and the aerodynamics of disks and aeroplanes are indeed very similar. When the Frisbee is in motion, air passes over the upper curved surface and speeds up, creating a region of low pressure above the Frisbee. Air passing under the Frisbee slows down and creates an area of high pressure underneath the Frisbee, and the resulting pressure differential is what lifts the Frisbee.

However, all this lift is useless if the Frisbee is not spinning. Without spin, a Frisbee will be very unstable as it travels through the air, causing it to quickly stall and fall to the ground. The reason the spin generates stability is all down to its angular momentum. Basically the faster the Frisbee spins, the greater the force which keeps it steady. For greater detail on the stability of spinning objects, see the excellent entry on gyroscopes.

Of course, Americans cannot see any sort of object without wanting to create a complex and bizarre game around it, so many set out to create a sport involving Frisbee. An early attempt involved changing the game of American Football in order to make an equivalent called American Frisbee. Sadly, it proved just as pitiful as the original, so a whole new game had to be thought up. This was called Ultimate, and since the Frisbee revolution that Ultimate inspired, Frisbee Golf has also become popular.

Ultimate Frisbee consists of several rules stolen - that is to say taken - from other sports. The field is set up with two end-zones a large distance apart. Each team has an equal numbers of players, preferably five to seven each. To begin the game, Team A throws off the Frisbee to Team B, who catch it. Team B's challenge is then to pass the Frisbee in between themselves until they reach their opponents' end-zone.

While holding the Frisbee, the player may not move from the point they were at as they caught the Frisbee, and is only allowed to pivot on one foot, as in netball. From this one spot the player must attempt to throw it to another team member. If the other team intercepts it, or knocks it down, or the Frisbee just decides to obey the laws of gravity for once and hit the ground, the other team gains possession. They then try for the other end-zone, and both teams scurry back and forth until they score a point by having one of their team catch the Frisbee in their opponents' end-zone. Whoever gets the most points by the end of the game wins (bet you didn't see that one coming). This sport, while not yet Olympic certified, is present in the International Games (aka, The Games that are Not Olympic Worthy), which were recently held in Korea. No one knows (nor cares) who came home with the trophy, medal, whatever.

Frisbee golf is completely different from Ultimate, but not completely different from golf. To play, you will require several Frisbees at your disposal, as each player must have their own (distinctive) Frisbee. If you are short on Frisbees then plastic plates, compact disks, old vinyl records (Cliff Richard albums do nicely) and of course pie tins can all make a passable flying disk. The course is made up at the whim of the group, with the only rule being that they must all agree on a target and how a 'hole' must be completed (eg getting stuck up a tree, passing through two uprights, landing in a basket, hitting a pedestrian, etc). The winner of each hole is given a point, and methods of dealing with more than one winner can be thought up on the spot.

Each shot after the 'tee-off' can only be taken up to one step away from where the Frisbee landed. On no account must you keep score officially, otherwise the fun is lost. Much of the fun of the game is also found in trying to get stuck Frisbees down from trees using stones, sticks or the lightest member of your group. You can work out scoring and prizes yourselves, but be warned that the Frisbee is an unpredictable device and in certain conditions can fly in the opposite direction that it is thrown, and indeed will usually fly into trouble (eg nettles, a loch or lake, the middle of a motorway, the windscreen of an expensive car, etc).

Frisbee golf should be much more interesting and fun than golf for the following reasons.

Frisbee and the World Today

Frisbee Golf is now becoming more established as a sport, with some people sadly taking it all far too seriously, whereas the truly exhausting game of Ultimate Frisbee has deservedly captivated minds and bodies all over the globe: hundreds of start-up Frisbee clubs have popped up across the world, and Ultimate is now seriously threatening professional bowling and cow tipping as the world wide past time.