Piers Of The Isle of Wight, UK Content from the guide to life, the universe and everything 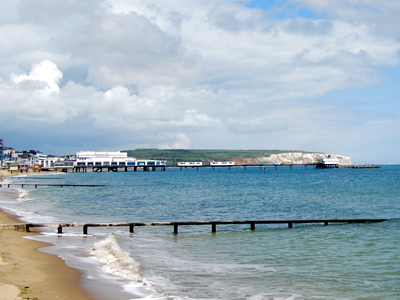 The Isle of Wight, being an island, has unsurprisingly had several piers built around it over the years - this is to be expected. But to fully appreciate the Island's piers, we must first define what a pier is. A pier, after all, is quite different from a pontoon, jetty or wharf; the only similarity is that they are all structures built over the sea that can be used as a landing stage for a boat. A true pier, though, is part of the traditional British 'bucket-and-spade' seaside holiday, and is intended for use by the public as a means of entertainment and pleasure.

The Rise in Popularity of Piers

In Britain and Europe between the 16th and 18th Centuries, it was common for people to go to spa towns, such as Bath and Harrogate - they believed that the water of such towns was very good for their health. Then in 1750 Dr Richard Russell published a pamphlet advocating sea water as a cure for most illnesses. His home village of Brightelmstone, soon re-named Brighton, grew in both size and popularity, and with the invention of the bathing machine by Benjamin Beale, it seemed inevitable that other seaside resorts would soon follow Brighton in popularity. The only thing that was needed was a good transportation network.

As roads were still too impractical for travelling long distances, the best means of transport was by sea. The drawback with sea travel was that most wharves and landing stages were only accessible at high tide - longer piers, accessible at any tide, were needed, and in 1814 Ryde Pier on the Isle of Wight was finished, becoming the first promenade pier in Great Britain.

In the 1820s paddle-steamers and trains meant that it was even easier to travel to the Isle of Wight, and the Bank Holiday Act of 1871 helped many working-class families to enjoy day trips. The pier was an essential part of the Victorian holiday, yet since World War II piers have enjoyed less popularity as more and more visitors, instead of enjoying a British bucket-and-spade holiday, have gone for package holidays abroad.

Yet during the period in which piers were popular, the Isle of Wight had several piers built in its resorts around the coast.

A Timeline of Pier Building on the Isle of Wight