Sandown Pier, Isle of Wight, UK Content from the guide to life, the universe and everything 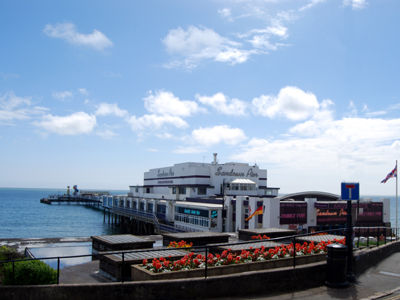 Sandown is comfortably near the middle of a five-mile long stretch of golden sand known as Sandown Bay. Despite being in the Domesday Book1, it was not until 1789 - when John Wilkes, a former mayor of London, retired to Sandown - that it became known as a watering hole. Previously it had been little except a fishing village, castle and military garrison.

When the Ryde-Shanklin railway opened in 1864, Sandown's population grew at a rate faster than any other town, as it offered exceptional sea bathing. Visitors who stayed at Sandown included the Crown Prince and Princess of Germany, and Charles Dodgson, better known as Lewis Carroll (author of Alice In Wonderland).

Plans to build a pier were considered as early as the 1860s, yet it was not until 1874 that an Act of Parliament allowing work to begin on the pier was passed, and work began in 1876. By 1879 the pier opened, but was only 360 feet long. The Sandown Pier Company had ran out of funds.

In 1887 a new company, the Sandown Pier Extension Company, bought the pier. The company was owned mainly by Richard Webster, the Member of Parliament for the Isle of Wight at the time. Richard Webster's father Thomas had owned the Beachfield Estate in Sandown, and had done much to develop Sandown as a tourist resort; for example, out of his own pocket he had funded Sandown's waterworks that prevented sewage being dumped into the sea. Richard Webster was also fond of Sandown, and when he became Chief Justice of England in 1900, the title he chose was Lord Alverstone, named after a hamlet just outside Sandown - the closest title he could get to 'Sandown'.

By 1895 the pier was extended to 875 feet, and a domed pavilion was built and opened on the pier on 17 September, 1895. Much of Sandown was decorated for the event, and a regatta was held in its honour: surviving photographs show the splendour of the town that day. Bathing was allowed at the pier head, and at the bottom of the pier several bathing machines were in constant use. It was in Sandown that Lewis Carroll wrote 'The Hunting Of The Snark', which includes the lines:

The fourth is its fondness for bathing machines,
Which it constantly carries about,
And believes that they add to the beauty of scenes -
A sentiment open to doubt.

Paddle-steamers called regularly at the pier head until the Great War of 1914.

During the war Lord Alverstone died, and the Sandown Urban District Council offered Lord Alverstone's trustees £2,500 for the pier, after which the pavilion was enlarged and the Sandown Prize Band2 often played on the pier. After the war bathing machines were no longer used, except as changing cubicles, and the town adopted the 'continental' method of changing in tents along the shore.

In 1933 a pavilion was built on the pier head, and it was opened on 23 October, 1934, by Admiral of the Fleet Lord Jellicoe. The pavilion was used as a ballroom, and many steamers continued to call at Sandown Pier, including, from 1934, the Sandown. During the war the pier was sectioned and was partially demolished to prevent it being used as a landing stage for German vessels, and the Sandown was requisitioned by the Royal Navy and used as a minesweeper3.

After the war the pier needed to be repaired, especially the landing stage. During the 1950s Sandown enjoyed popularity while bucket-and-spade holidays became popular again, and often held the all-England sunshine record. Between 1957 and 1959 there was even a direct passenger service to Portsmouth from Sandown Pier (a journey of 75 minutes), and the pier is still visited occasionally by paddle-steamers.

In 1965, when Lord Louis Mountbatten was installed as Lord Lieutenant of the Isle of Wight, Her Majesty Queen Elizabeth II and His Royal Highness Prince Philip toured the island, at the end of which the Queen attended a ceremony at the pavilion, before boarding the Royal Barge moored at the end of the pier.

In 1968 the pier needed to be rebuilt after nearly a century's town service. The old pavilion was pulled down and a new pavilion on the shore end was built. This was used as a theatre, and for the first time theatre-goers did not have to brave wet and windy weather in winter. On 22 July, 1973, the pier was re-opened by Earl Mountbatten.

In 1989 the pier suffered from a fire in the theatre, but after new fire exits were constructed and the latest fire-fighting equipment installed, the pier opened as good as new.

In 1999 the theatre sadly closed, and was replaced by a golf course and a bowling lane. The pier still hosts an amusement arcade, bar, restaurant, dodgems, shops4 and even, occasionally, a small market, and remains popular with tourists, fishermen5 and those who love seaside piers.

1Where it was known as Sande; later it became known as Sandham.2A brass band that was considered to be among the best in the country, winning several trophies.3The Sandown led the 10th Minesweeping Flotilla out of Dover and saved 3000 men at Dunkirk. The Navy has not forgotten the ship's bravery, and the first of the modern Sandown-class Minesweepers, HMS Sandown, was named after the ship. HMS Sandown can often be seen in Sandown, and in 1998 the ship and crew were granted the freedom of the town.4Including a doughnut-seller.5Many different species of fish and spider crabs enjoy living beneath the pier.