Ventnor Piers, Isle of Wight, UK Content from the guide to life, the universe and everything 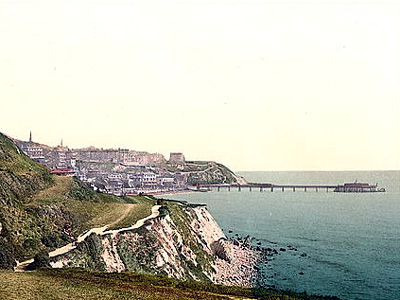 Ventnor was originally a small fishing village on the south coast of the Isle of Wight, isolated by steep hills, the rocky Undercliff and a rough part of the English Channel. Ventnor was more accessible by sea than land, and so remained a small isolated community until the 1840s. In 1830, Sir James Clarke discovered that Ventnor enjoyed a special microclimate, one of the healthiest in the British Isles, which was helpful in treating pulmonary diseases. Ventnor is essentially a south-facing suntrap, sheltered from the north by hills and inland cliffs.

After Clarke's publication of his report in 1841, the population of Ventnor quickly grew from 800 to 5,000. In 1848 a seafront esplanade was constructed, and in 1866 the Ryde-Shanklin railway line was expanded to Ventnor. Later, the Isle of Wight Central Railway company expanded a line from Newport to Ventnor West, which opened in 1900.

In 1869, Dr Arthur Hill Hassell established the Royal National Hospital for Diseases of the Chest in Ventnor. Many people from all over the country, and indeed Europe, came to Ventnor to be cured of tuberculosis, which was unable to be cured by medicine alone at the time; patients included Charles Dickens, Thomas Carlyle, Karl Marx and Alfred Lord Tennyson. Ventnor was definitely becoming popular, but the question of access and transport was still a problem. For this reason, a combined pier and harbour would be vital to help deliver building materials, coal and other merchandise, as well as to transport people to the hard-to-reach town. The trip from Portsmouth to Ventnor would then take an hour-and-a-half, instead of four hours.

In 1861, before the railway had reached Ventnor, the Ventnor Pier and Harbour Company was formed. It planned to build two piers on the Ventnor seafront, 700 feet apart, and an eastern esplanade. The Western Pier was to be the principal pier, and would extend 300 feet south, and then extend a further 100 feet south-east. The Eastern Pier would extend 300 feet south-west, and this would then form a harbour between the piers, protecting boats from the storms that Ventnor is subject to.

In 1862, the Ventnor Pier and Harbour Act was passed by Parliament, and work began in early 1863. By June, the Western Pier was 260 feet long, and despite not being complete, was opened for June's Coronation Day. The steamer Prince Consort visited at high tide, and 300 day trippers landed. It was decided that the pier would only be used by steamers for three days a week until it was complete.

On 1 July, the PS Chancellor, a large excursion vessel, travelled to Ventnor. Against the captain's judgement and at the insistence of a company director who was aboard at the time, she berthed at the pier whilst the tide was falling. When the tide fell, she grounded, and the sea bottom pierced her hull, flooding her on the next tide. The pier was no longer used by steamers until it had been finished.

By March 1864, the Western Pier had been finished, and was even longer than had been intended. A pier head had been built, and daily services to Littlehampton on the Antagonist and Ursa Major were popular. Pleasure cruisers called from Portsmouth and Southampton. Work continued on the Eastern Pier, which had suffered storm damage in the winter. By August, the Western Pier had railings and seats all along its length, and the local Ventnor Temperance Band often played in the evenings.

Sadly, in October 1864, a serious succession of storms and gales attacked Ventnor, damaging the promenade, as well as all-but destroying the Eastern Pier and damaging the Western Pier. The Ventnor Pier and Harbour Company was responsible for paying for the repairs to the piers, harbour and esplanade sea wall, and as the company could not afford it, the harbour fell into a state of dilapidation. By January 1867, storms had destroyed much of the remains of the two piers, and the remains were sold, the Western Pier for £460, and the Eastern Pier for 70 guineas.

In 1870, a group of local businessmen formed the Ventnor Pier and Esplanade Company. Despite the short life of the harbour piers, while they were open their advantages had been felt by all. Mr Burt, who had bought the Western Pier's remains, was the prime mover behind the scheme, and planned to build a 700-foot pier on the old pier's site, and 640 feet of embankment and esplanade along the sea front. The Board of Trade approved the plan and the Ventnor Pier And Harbour Order was made in 1870, and work began on the pier's construction in December 1871.

By the summer, the pier was 200 feet long, and it was opened to the public on 5 August, 1872. By 1873, the pier was 478 feet long, but the pier head and landing stage could not be finished because of lack of investment. By 1878, only half the necessary money had been raised, but the pier was still very popular with promenaders, and bands often played on the end of the pier.

Finally in 1881, work began on completing the pier head and landing stage, and the steamer Prince Leopold embarked passengers in July from the partially completed landing stage to take them to Bournemouth to celebrate the regatta1. The landing stage was soon finished, and was opened on 15 September, 1881, and one of the largest paddle-steamers, the Heather Bell, landed at Ventnor. The pier was popular, but only a few steamers called before the season ended.

Sadly, on 27 November, 1881, a very violent storm struck Ventnor. It removed 40 feet of the pier shank and destroyed the new landing stage. The pier, which had taken ten years to complete and had only been open for ten weeks, was destroyed.

The remains of the Esplanade Pier were bought for £2,600 by the Ventnor Local Board, who planned to rebuild it. There was at first some dissent about whether Ventnor needed another pier - and whether it would survive - but Parliament approved the building of a pier in July 1884 by passing the Ventnor Local Board Act. Construction on the pier began in late 1885, and the pier was finished in July 1887. The pier head was in the shape of a horseshoe, and it was locally joked that that was 'for luck'. The pier also had a bandstand, cloakrooms and toilets, and was 650 feet long.

On 19 July, the Bangor Castle was the first steamer to land at the pier, followed by the Princess Beatrice and Prince Leopold soon after, although the pier was not officially opened until 19 October, 1887, when it was opened by Sir Richard Webster QC, Member of Parliament for the Isle of Wight, who was later to become Lord Alverstone. In 1888, over 3,000 excursionists arrived at the pier by steamers from Bournemouth, Southampton and Portsmouth, and over 10,000 visited in 1889. In 1892, the Sea Breeze was the first steamer to travel to Ventnor from Brighton. The pier, combined with the railways, meant that Ventnor was far from being the isolated village it had been less than 50 years before.

In 1903, the original bandstand on the pier was moved to Ventnor Park, where it still is today, and in 1904 a small stage, some dressing rooms and a store room were built, covered by an awning until the pier's pavilion was built in 1906. In 1908, a maple floor was laid in the pavilion, and in 1913, a new bandstand was built at the pavilion entrance, near the shore.

During the Great War, steamer services ceased, yet concert parties at the pavilion continued. After the war, steamer services continued right through the 1930s, with the pier being a popular and appreciated part of Ventnor. At the outbreak of World War II, though, the pier was sectioned and 100 feet of the pier was removed. By the end of the war, the pier had suffered from its years of neglect, and the local council had to wait before getting compensation from Government. By 1948, a survey of the pier condemned all but a few of the piles and the landing stage; rebuilding the pier would cost £76,267, of which the Ministry would pay 90%, so the council just had to raise £15,000. Work began in July 1950, and as it was almost a complete rebuild of the pier, the pier was known as the New Royal Ventnor Pier after its opening in 1955.

The first steamer to use the reconstructed landing stage was the Cardiff Queen, which visited on 25 May, 1953. The pier, though, was not officially opened until 28 May, 1955. The pier was considered the most modern in Britain as it had been rebuilt of welded steel, was now 683 feet long and had a series of nine glazed shelters along its length. The entrance housed seven shops, ticket offices and booths, plus a large entertainment area on the pier head. By September 1955, over 200,000 people had visited the pier, and Red Funnel steamers visited. The pier became more popular when local rock'n'roll bands played on the pier, but by 1967, the landing stage was once again in need of repairs, this time likely to cost £41,000. In order to reduce this sum, much of the landing stage was demolished as steamer traffic to Ventnor, as elsewhere, had reduced in the 1960s.

In the early 1970s, fewer people holidayed on the island as it became easier to travel abroad, and the pier's income was affected. Winter storms took their toll and repair costs increased, with little money to pay for them. More of the landing stage was demolished in 1975, and the shore half of the pier was covered up, filled with amusements machines and leased by various companies. In 1981, it was discovered that £750,000 was needed to repair the pier. The pier was closed, yet no work on repairing it was started. In 1985, a fire broke out on the pier, destroying much of the shore half. There was a proposal that for £460,000 the pier could be rebuilt as a promenade pier and a design was approved in 1985, but the pier's lessee, who had rights over the pier until 1990, demanded compensation from the council. By 1988, this had been settled, with the council paying a sum of £170,000, which left the council little money to spend on rebuilding the pier.

By this time the amount needed to repair the pier had risen to £800,000. Ventnor Town Trust tried to raise the money, with the council providing £250,000, but this sum proved too much to reach. In 1993, the pier was sadly demolished at a cost of £239,950, although it did not go without a fight - the demolition rig used to demolish the pier broke from its moorings in a storm, forcing those on board to be evacuated by rescue helicopters.

Picture courtesy of the Library of Congress

1The rocks which lay on the seabed that had pierced the PS Chancellor had been removed in 1868.