Railways on the Isle of Wight, UK Content from the guide to life, the universe and everything

Railways are a vital part of any transportation network, and the Isle of Wight is no exception. Railways proved the backbone for many people and companies, so much so that five different railway companies were involved in providing railway services. 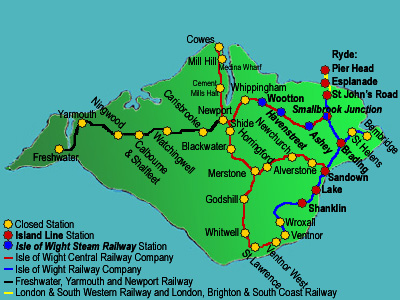 The first railway on the Isle of Wight was the Cowes & Newport line, started in 1859, and opened on 16 June 1862. It was a commercial railway, and despite being only 4 1/2 miles long, it connected Newport, the Island's capital, to Cowes and the sea. In 1877 Medina Wharf was built, where coal and most heavy goods were landed, and provided the main means of transporting goods to Newport for over 50 years, and later carried passengers.

The line expanded when the third railway line built on the Island was finished. It was the Sandown to Newport line, planned by the Isle of Wight (Newport Junction) Railway company in 1868. It built a line from Sandown to Newport, a distance of nine miles, yet it had several problems. It kept failing to pass several safety inspections until it finally opened in 1879. It then ran until 1880, and the company fell into receivership. It was bought by the Cowes & Newport line, whose name then changed to the Isle of Wight Central Railway. From Newport, heading Southeast, were the stations Newport, Shide, Blackwater, Merstone, Horringford, Newchurch, Alverstone and finally Sandown.

Meanwhile, the Ryde & Newport Railway, sanctioned in 1872, had opened in December 1875. It was administered by the Cowes & Newport Line, before the amalgamation in 1887 that formed the Isle of Wight Central Railway. It ran east to west, and the stations were Newport, Whippingham, Wootton, Havenstreet, Ashey and joined the Isle of Wight Railway at Smallbrook Junction, running to its final station at Ryde St Johns Road.

The final section of railway line to be opened on the Island was the Newport to St Lawrence railway, part of the Isle of Wight Central Railway network. It ran from the station of Merstone and headed south to Godshill, Whitwell and St Lawrence, and was opened in July, 1897, and expanded to Ventnor West station in June, 1900.

The Isle of Wight Railway

The second railway company opened the second railway line on the Island. It was the Isle of Wight Railway company. This ran from Ryde St Johns Road to Shanklin on its opening on 23 August, 1864, and was expanded to Ventnor in 1866. This was a passenger railway, and ran in a straight line from north to south. The stations on this line (from North to South) were Ryde St Johns Road, Brading, Sandown, Shanklin, Wroxall and Ventnor (East).

In 1882, a new stretch of line from Brading to Bembridge was opened, with a third station in between at the village of St Helens. This was run by the Isle of Wight Railway Company. A train ferry operated from here for six years, but closed in 1888.

Connections to the Mainland

The main problem that still existed in the 1870s was that the Isle of Wight lines did not have a direct connection with the main ferries that link the Mainland to the Island. Ryde has always been the main port, although Cowes and Yarmouth are also used. In 1812, the original Ryde Pier had been constructed, and the main ferry to Portsmouth ran from here. A horse-drawn tram system linked Ryde Pier Head to Ryde St Johns Road station, but this was unsatisfactory. Two mainland railway companies, the London & South Western Railway and the London, Brighton & South Coast Railway were eager to expand their networks onto the Island, and the share in the profitable business there. They expanded Ryde Pier to over half a mile long, and built a joint-owned railway line on top of it, which connected to Ryde St John's Station along the route that had been used by the horse-drawn trams. The line continued inland, through a tunnel beneath the town of Ryde after the station of Ryde Esplanade, and emerged just before coming into Ryde St Johns Road. This was opened in July, 1880.

The railways until now only covered the Eastern side of the Island, and the next line to be opened on the Island carried passengers to the western towns of Yarmouth and Freshwater. The Freshwater, Yarmouth And Newport Railway did not open until December, 1890, and from west to east, it stopped at Freshwater, Yarmouth, Ningwood, Calbourne & Shalfleet, Watchingwell, Carisbrooke and finally Newport.

Running of the Railways

The island lines were noted for steep gradients, such as the section between Ryde Esplanade to the tunnel beneath, and the 5 1/2 mile constant uphill from sea-level between Brading and Sandown, just outside the village of Yaverland to the heights of Ventnor and the station 300ft above.

After 1923, the Railways were all grouped together under the unified ownership of Southern Railway. The locomotives employed on the Island were all named after towns and villages on the Island. The Isle of Wight became a very popular tourist resort, especially the south-east coast towns of Sandown, Shanklin and Ventnor. This continued until the 1950s, when, under Dr Beeching1, railway lines were being closed.

End of the Railways

Dr Beeching was the 'trainspotter's anti-christ' and seemed determined to make railways extinct.

Since then, the Ryde - Shanklin line has survived, and in 1966 the steam trains were replaced when the line was electrified. The new trains are London Transport tube trains, which were built in the 1920s, and were the only modern trains able to cope with the island's unique narrow gauge and low tunnel clearance at the Ryde tunnel. Since then, a new station has been built in the village of Lake between Sandown and Shanklin, and was opened in 1982, and Smallbrook Junction was opened in the mid-1990s. Now the stations open are, from north to south, Ryde Pier Head (for ferry to Portsmouth), Ryde Esplanade (for Hovercraft to Southsea), Ryde St Johns Road, Smallbrook Junction (for Isle of Wight Steam Railway) Brading, Sandown, Lake and Shanklin. So far plans to expand the line to Ventnor have failed, and are unlikely since privatisation, when the line was bought by Stagecoach.

The Isle of Wight Steam Railway

The Isle of Wight Steam Railway is a railway run by steam enthusiasts, and in 1966 they managed to prevent a small, mile long, piece of track between Wootton and Havenstreet from being closed. Since then they have been raising funds to restore the Island's railways to their original glory, and by 1994 managed to restore the line from Havenstreet to Smallbrook Junction, rebuilding Ashey Halt in between. They are now planning to re-build the line to Newport, yet face financial and practical problems as the old site of the station has been bulldozed and several houses built on the old line. However, they have the support of the whole Isle of Wight and the Council, who so far have prevented any developers building any more obstacles in the way. The closure of the railways was the biggest mistake that the Isle of Wight has suffered, and there are dreams that the Island will once more be covered in steam railway lines; being a haven for steam enthusiasts everywhere. This, unfortunately, seems unlikely.

1First Chairman of the British Railways Board formed in 1961, Dr Beeching was responsible for the closure of a third of all Britain's railways.