Piers of the East Wight, Isle of Wight, UK Content from the guide to life, the universe and everything

On the far east of the Isle of Wight, north of Whitecliff Bay, lie the three villages of Bembridge, Seaview and St Helens. This is the quietest part of the east Medine, yet despite this, it has also had its share of piers.

Bembridge is on the opposite end of the island from Alum Bay, the far eastern shore. Bembridge itself has always been a village, and now is among the largest in Europe, but during the Victorian era when Queen Victoria lived on the island, Bembridge became a popular tourist attraction, and soon developed a pier.

In 1864 the Bembridge Railway, Tramway and Pier Act was passed by Parliament, authorising the construction of land-reclamation works and the building of a pier. By 1878 over 800 acres of land were reclaimed, and the pier was built. Bembridge Harbour Pier was only 250 feet long, and quite narrow too.

Despite this, it was used by many ships, including the 46-ton Tynemouth, and after the harbour had been dredged to allow larger ships, the 125-foot Island Queen in 1878, and in 1892 the 104-ton, 137-foot paddle-steamer Princess of Wales, which was re-named the Bembridge. Ships which called at Bembridge regularly on a passenger service included the Sandringham, Prince, Duke of York, Carrier and the 130-foot Lord Kitchener. The largest ferry was the Alexandra in 1913, which was a 235-ton ship and 171 feet long.

Seaview, a village near Bembridge, had constructed its own pier in 1881, and in 1914 a ferry service between Bembridge, Seaview, Southsea and Portsmouth started; however, soon after the 130-foot Alleyn had been brought onto the route, the Great War started and all ferry services were suspended.

After the war, steamer services resumed, but less than before the war. Fewer people wished to travel to Bembridge, and another problem was that the harbour was beginning to silt up. Steamers could only reach the pier at High Tide, and it was easier to travel to the island from Portsmouth by ferry to Ryde Pier, which could be reached no matter the tide, and take the train from there, changing at Brading. The ferry service ended in 1924, and the pier was demolished by 1928. 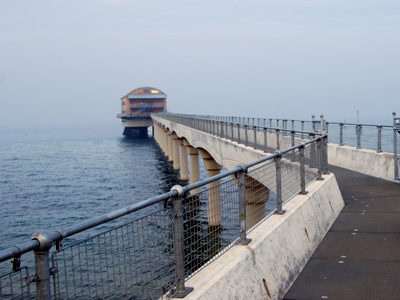 In 1922 the Royal National Lifeboat Institution started work on the building of a pier not too far from Bembridge, for launching a lifeboat. When finished, it was 250 yards long and so cleared all the nearby ledges, no matter what the tide. A boathouse was built at the seaward end, and a new lifeboat, the Langham, was stored inside.

In 2009 a new pier and larger lifeboat station was built alongside the 1922 pier. When completed, the old pier was demolished in 2010. The new lifeboat station houses the Alfred Albert Williams, a Tamar-class lifeboat that, at a cost of over £2.5 million, is the most advanced all-weather lifeboat operated by the RNLI. This ship patrols the Solent, one of the busiest shipping lanes in the world.

The village of Seaview became popular in the 19th Century due to its close proximity to Ryde, before which it had been notable only for extracting salt from the sea water on the shore. By 1870 the population of Seaview had grown to 3000, and Squire Glynn, owner of the Seagrove Estate, decided to develop Seaview into a fashionable resort. In 1877 the Seaview Pier Company was formed to build Seaview a promenading pier, and approval for a 350-yard-long pier was given by Parliament in 1878.

Frank Caws, son of the local land owner Silas Caws, was an engineer and designed a suspension pier, the third in Great Britain after Brighton Chain Pier and one at Leith in Scotland.

The pier was finished in 1881, and was 1000 feet long and 15 feet wide. There were four towers from which the pier deck was suspended, and the cables used were strong enough to hold 30,000 people - half the island's population - at a time. A small pavilion was built on the pier head, as was a crane. At the shore end, there were two buildings, one for the Piermaster, and one a waiting room. By the end of September 1861 16,000 people had used the pier, including the Prince and Princess of Wales. The pier was very artistic and aesthetically beautiful, and also swayed as you walked along it.

Not as many paddle steamers called at Seaview Pier as had been hoped, but the pier was still profitable - the pier head was expanded by 50 feet in 1889, and again in 1901. Electric lights were installed in 1905, and in 1914 the pier company decided to increase profits by buying its own steamer. Sadly, after buying the Alleyn, war was declared and all steamers were commandeered for war work. After the war, no steamers returned to the pier, only small launches carrying passengers.

During World War II the pier was used by the Royal Navy, especially during the preparations for D-Day. After the war it was in need of repair, and despite it being listed as a building of special architectural and historic interest in 1950, it was too late. Within a month of Seaview Pier being listed, disaster struck as on Boxing Day and the 28th December 1950, the island suffered the worst gales for 45 years. 20-foot-high waves and 70mph winds totally destroyed the pier, leaving only beautiful photographs, and fond memories.