Piers of the West Wight, Isle of Wight, UK Content from the guide to life, the universe and everything

Alum Bay is on the far western tip of the Isle of Wight, and is known for the beautiful multi-coloured sand of the cliffs. These were a popular tourist attraction even in the 1790s and were a favourite spot of Alfred Lord Tennyson, who is remembered with nearby Tennyson Down. It was also from here that Marconi broadcast his radio transmissions in 1897.

The pier was 370 feet long, and was 'paddle shaped' so that the pier head was twice as wide as the promenade leading to it. On the pier was a café, gift shop and a small restaurant, where a glass of water cost 1d. The pier was often very busy, no more so than on July 23 1909, when the 9060 ton German liner Derfflinger ran into the Shingle Bank off the Needles, and two-and-a-half miles from Alum Bay. She was trapped for two days before the tugs nearby were able to pull her free, all of which was witnessed by people on the pier.

Several paddle-steamers called at Alum Bay, including the Princess Beatrice, Prince of Wales and Lorna Doone. Even islanders enjoyed travelling to Alum Bay on the paddle-steamers - day trips were available there from Yarmouth in the summer of 1909. Steamers on the London And South Western Railway frequently called there until the outbreak of the Great War in 1914.

After the war, Alum Bay pier was virtually abandoned. The last steamer to call at it was Red Funnel'sQueen in 1920. By 1925 the pier was declared unsafe and closed, and in the winter of 1927 the pier suffered severe storm damage, and broke in two. Only the shore half remained, and was still in use when Alum Bay was used as a military practice area in World War II. Now, no trace of the pier remains, and Alum Bay just has a small landing stage. The easiest way to get to the bay now is by using the chairlift, which, since 1973, has helped tourists descend from the Needles Pleasure Park that has opened at the top of the cliff.

In the 1870s, a steamer service started from Lymington to Yarmouth, near Totland Bay, bringing more tourists to the western side of the island. When a road connecting Totland Bay, Colwell and Yarmouth opened in 1873, the popularity of Totland Bay increased, and by 1879 plans to build a pier in the bay were considered. 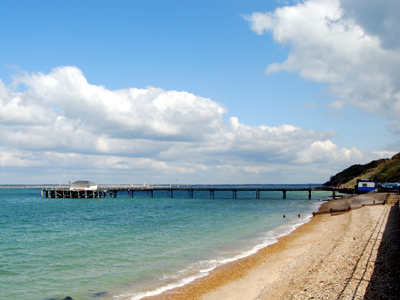 The pier was completed in March 1880, and was 450 feet long, built of iron girders. There was a small shelter at the pier head, and an amusements arcade was constructed at the shore end. The pier was owned by the same company that owned the Totland Hotel, by far the largest and most exclusive hotel in the western Wight. The pier enjoyed visits from steamers to Lymington on the mainland and Yarmouth on the island, and later it was possible to travel on around-the-island cruises, or to travel to Southampton, Bournemouth and Portsmouth. After the railway line from Newport to Freshwater opened in 1890, the pier and bay became even more popular.

As with other towns and piers, annual regattas were held on the pier, attracting a lot of people to the specially-decorated area. The pier helped attract many more people to the Totland and Freshwater area, and the civilian population increased - the area had previously been dominated by the military forts in the area.

Totland Bay, and the pier itself, started to suffer from coastal erosion by the beginning of the 20th Century, and the shore end of the pier had to be extended in 1916 to reach the new shore-line.

During the Great War, despite all pleasure cruises stopping, ferries to Totland Bay Pier from Lymington continued until May 1918. This was because it was easier to travel to Yarmouth from Lymington, there was little demand to travel to Totland. A once-a-day service started again in 1919, but by 1927 this had stopped too. Pleasure cruises after the war continued to call at Totland as part of the 'Round ihe Island Cruise' until 1931, by which time the pier was in need of repair.

During World War II the pier was sectioned, and after the war it was repaired and rebuilt by the Wall brothers and Mr Humby. It re-opened in June 1951, and included a new shelter at the pier head. On June 17 the pleasure steamer Lorna Doone II berthed at the pier, and other steamers continued to visit until 1969.

In 1971 the pier was sold to Trinity House, and was used as a base for their pilot boats and operators. In 1975 the pier was used as a data-gathering centre by the National Physical Laboratory to monitor wave and weather activity, information that would be used to design oil rigs. After 1975, the pier was sold and owned briefly by many different owners while a lack of maintenance continued to damage the pier. The arcade at the shore end of the pier was destroyed in the 1987 hurricane, the same storm that destroyed Shanklin Pier.

The arcade was re-built by Jack Shears, who owned it and the pier until 1992. In 1992 the pier was bought by Henry Leeson, who planned to rebuild it. The MV Balmoral visited the pier in 1993, bringing tourists and money for the pier fund to the area. Also in 1993, South Wight Borough Council spent £740,000 on sea defences, groynes, a new sea wall and promenade and other improvements to the beach, yet no money was spent on the pier.

In December 1997, solicitor Andy Millmore bought the pier for £19,500. He hopes to repair and rebuild the pier, keeping it open to the public.

The town of Yarmouth, on the mouth of the western river Yar, dates from at least Saxon times. Around the time of the Norman conquest the port was among the busiest on the island, and was the first town on the island to be granted a royal charter in 1135.

Over the centuries it was sacked by the French twice, in 1377 and 1524, leading to Henry VIII's building of Yarmouth Castle in 1547. Yarmouth became a borough in 1440, and remained a fairly busy port. In April 1830 the first steam ship ferry service between Yarmouth and Lymington on the mainland started, but until 1863 the only way across the River Yar was by rowing boat, when the first bridge across the Yar was built.

In 1858 the Brockenhurst to Lymington Railway opened, meaning more people were able to travel to Yarmouth and the West Wight. Yet despite this, it did not grow in either popularity or size as other resorts on the island, and remained primarily a port. 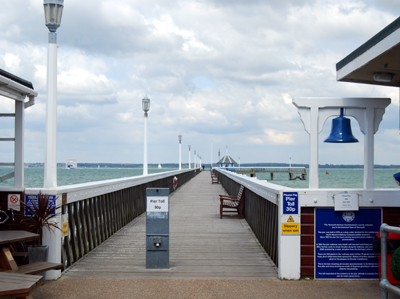 In 1870 the Yarmouth Corporation considered building a pier - but one intended for the cross-Solent passenger service, not a promenade pier as elsewhere on the Island. The Yar Pier Order was passed by Parliament in 1874, and work began on building a purely wooden pier in June 1875. On July 19 1876 it opened, at a length of 685 feet. Shortly after opening, 150 feet of the pier was smashed when the Prince Leopold crashed into it on a clear, fine day. The Corporation wrote to the vessel's owners, apologising, now wanting to discourage vital trade from calling.

In 1879, both the Lymington Railway and Solent Steam Packet Company were bought by the London and South Western Railway company, which in 1884 extended the line to Lymington Pier. The ferry now stopped at Alum Bay, Totland Bay, Ryde, Cowes and Portsmouth. In 1889 the Freshwater, Yarmouth and Newport Railway started running services to Newport, and the line to Freshwater was opened in December 1890. This encouraged a lot more visitors to Yarmouth - before the railway, travelling from Newport to Yarmouth by stagecoach took at least three hours.

In 1889, whilst on the Yarmouth ferry, Alfred Lord Tennyson composed the famous poem 'Crossing the Bar'. In 1890 it cost 4d for a ticket to Lymington, 1/- for a third class ticket to Newport, and 2/- to all island stations further than Newport. In 1891 Yarmouth lost its borough status under the Rotten Boroughs Legislation, and in February 1891 the Yarmouth Town Trust took over administration of the pier. One of their first actions was to improve access to the pier by demolishing buildings on the western side of Bank Street, creating Pier Square.

In 1893 the first steamer purpose-built for the Lymington to Yarmouth ferry route, the Lymington, entered service. With trips to Bournemouth, Portsmouth, Swanage and Southsea available, plus trips to Cowes for the Cowes Week fireworks, the pier was ever popular. Among the famous people to travel this route was Sir Winston Churchill, who had come to the island to address a meeting in Newport in 1910.

On Tuesday October 26, 1909, the pier suffered a collision for the second time. A 60-ton barge, the Shamrock, travelling to Weymouth, crashed into the pier during a gale, destroying 50 feet of the promenade. The ship's owner described the accident as 'an act of God', and did not pay any compensation.

During the Great War the pier was frequently used by Navy vessels. By 1916 the structure of the pier was in need of repair, which cost £250. In 1927 a pavilion was built on the pier head.

One of the problems with the pier was that, despite its use as a ferry terminal, it was unsuitable for handling cars. This led to the 1931 Yarmouth, Isle of Wight Pier and Harbour Order, which was responsible for the pier and harbour. Properties on the quay were bought in order to build a new ferry terminal, and the harbour was dredged. By May 1938 the first car ferry to operate on the route, the Lymington II, came into operation. It could carry 400 passengers and 16 cars, and was the first British ferry to use the Voith- Schneider propeller system, allowing it to be far more manoeuvrable. It was also one of the first roll-on-roll-off ferries. This took much traffic from the pier and to the new slipway, yet until 1947 she was the only vessel to do so, as all the other steamers still used the pier.

Since World War II Yarmouth Harbour has improved, with the construction of the South Quay in 1964 and a new breakwater in 1972. The pier has stopped being used by ferries to Lymington.

In 1975 the pier became a Grade II listed building, classed as being of historical and architectural interest as it is the last wooden pier in Britain. The girder-type lattice handrails are of special interest, but by 1980 the pier was once again in need of repair.

The Harbour Commissioners began an extensive restoration programme. £250,000 was spent on restoring the walkway, and a further £100,000 on other maintenance. £600,000 was needed for repairing the pier head. Today, the pier is used by fishermen, who catch mackerel, bass and cod, as well as still being visited by cruise ships, such as the PS Waverley, the last ocean-going paddle steamer in the world, bringing additional trade into the town. The pier has also been used recently as a promenade pier, with many people using the pier simply to enjoy the experience of walking over the sea.