Buses in the UK Content from the guide to life, the universe and everything 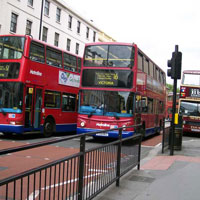 Buses1 are a form of public transport. They are large, seat-containing vehicles which the public gets into, and which are driven around town on a particular route and timetable, with the timetable often a few minutes too early for the buses.

The price of a journey is primarily dependent on the distance travelled. The longer a journey is, the more it costs. To simplify things, many companies divide their routes into zones, with prices dependent on which zones your journey crosses.

The type of passenger you are also has an impact on the price. Buses are generally free for children under a certain age, such as five, as long as they don't occupy a seat to the exclusion of a paying customer. Children and senior citizens frequently get discounted fares.

The most basic way to pay for a journey on a bus is with cash. The annoying aspect of this is in some areas you must have the exact change otherwise you will lose the surplus. This is intended to speed up journeys as the driver doesn't have to spend time forking out change2. This doesn't apply to every city, exceptions include Oxford.

An alternative to cash is a fare card, which has all your payment pre-paid, so you don't have to mess about with money. All you have to do is to put the card in a slot.

When using both these types of payment you have to state your destination so the correct amount can be charged.

Many bus companies have ticket offices so you can pay before you get on the bus, and this is generally more convenient if you have the time or don't have the exact change. In many countries (for example, Italy), prepaid tickets can be purchased at tobacconists or vending machines, which are cancelled by the passenger on entering the bus.

An alternative to paying for each ride is a bus pass. These offer free travel within a certain area or time period. You just need to show it, and the driver will let you on. Sometimes (particularly with long-lasting passes) there is picture on the pass to prove that you are entitled to use it. Otherwise the bus company would lose money.

In some places, companies have replaced the photos with magnetic cards which are inserted into a reader beside the driver. Where these are in use they can be bought on the bus itself (for one to 28 days) or at the company offices (for anything up to one year).

Bus stops are where buses stop for passengers to get on and off. As buses tend to bunch up on routes, one bus might stop behind another at the same bus stop. If you notice this is a great opportunity to skip the queue (as long as you notice this opportunity before everyone else).

There is sometimes a bus shelter at a bus stop for people to stand inside so they don't get rained on. However, they get stood in whether it is raining or not. Bus shelters are often dirty and they restrict vision if the panes of glass in them are steamed up, thus causing you to miss your bus. There are more of these built where more people get on.

In Paris, the bus shelters can actually be quite dangerous! They consist of three glass panes and four steel supports, plus the roof. If your vision is hampered by alcohol, for example, you can walk right into it and severely hurt your nose.

Inside the buses are seats (often covered in chewing gum), for people to sit on, amazingly. There may be a notice that tells you how many people are allowed to stand inside, and how many are allowed to sit. This is misleading because bus drivers often let as many people on the bus as will fit.

During some times of the day the buses can become busy and people will stand in the aisle. If you are catching a bus during these times, consider where other people will stand when choosing a seat, so you can get out easily and breathe. Remember, some people find that sitting in the back seats exacerbates motion sickness, especially when the bus is busy on a hot summer's day. Back seats also seem to attract teenage school children.

Bus routes do not always go where you want to go, buses don't always come when you want, and they are quite slow because they keep on stopping at bus stops. Travelling by bus can be even slower if you have to swap buses and wait for another in-between.

Another annoying thing about buses is that they often operate on routes that are only useful for travel in one direction, so while you and 50 other people are huddled under a bus shelter, five empty buses go past in the other direction. Half the time, these buses only have one or two people on them.

There is a strange phenomenon regarding buses, namely, you wait around for hours and then three come at once. There is a reason for this. If a bus is running late more people will have accumulated at stops ahead of it than usual, and it will take longer for them all to buy their tickets, and the bus becomes later. If a bus is running early there will be less people waiting at stops ahead because they haven't got there yet; or more likely, if the one in front is late, there will be less people at the bus stop because the one in front has only just done them, so the bus moves faster, spending less time picking up passengers and becomes earlier. This continues until the bus behind catches up with the one in front and the two buses take the stops alternately, with no way of breaking out of being stuck together. This can happen a few times on a bus's journey until quite a few buses are stuck together in this way.

It has been known for buses in bus stations to come into the wrong bay, and depart early with the operators somehow expecting the passengers to notice it. This happens fairly frequently in Cambridge where the buses are terrible.

Using unfamiliar bus routes can be very difficult, especially when you have to:

The people who run bus services (typically local authorities) claim that you should use buses rather than cars because instead of many vehicles there is just one and consequently there is less pollution. The majority of buses are ancient so their environmental merits can occasionally come into question. They are also liable to sit at the bus station for ages with their engines running before they even start letting people on.

Bus companies have also tried several environmentally friendly schemes. In Reading there was an experiment in using a rape-powered bus, and in Southampton there are several natural gas buses. At the time of writing there was a free natural gas bus that ran in Cambridge on a shuttle service around the city centre, painted green and yellow.

1Or 'omnibuses' from the Latin omni meaning 'for all'.2London buses (among others) sometimes have conductors, who will issue you with a ticket. This allows the bus driver to quickly pick up and drop off passengers without the delay of issuing the tickets himself.