Croquet Content from the guide to life, the universe and everything 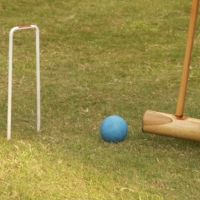 Croquet is a game usually associated with the lawns of the England and her colonies. The tools of the game are six hoops, balls, mallets and one post. The hoops are set out in three sets of two, with the outside braces being further apart than the central pair. The players take it in turn to hit the post at the start of the game, before setting off to the first hoop... one of the middle ones. The objective is to go down one side of the course, back through the middle, down the other side, and through the other hoop in the middle a second time, before winning by hitting the post again first.

Each time you pass through a hoop you have another hit; but you can gain extra hits, and outfox your opponent, if your ball taps your opponent's ball. Then you can place your ball beside your opponent's ball and tap it away... into a pond, let's say. If you consider the angles carefully, you may also be able to score another hoop in the process. This is where skill and strategy come into play: the desire to hinder your opponent's progress must be weighed against the harm to your own.

The most famous game of croquet in fiction is in Lewis Carroll's Alice in Wonderland. The Queen of Hearts plays a game with Alice, using flamingos as croquet mallets and hedgehogs for balls.

Croquet is played at Wimbledon, the home of the famous Grand Slam tennis event. Indeed, the full name of the club is the All England Lawn Tennis and Croquet Club, and is the pride of London SW19.