Kew Gardens' Important Trees: Holm Oak - Quercus ilex Content from the guide to life, the universe and everything 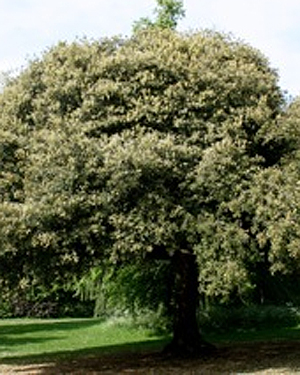 This tree is also known as the evergreen, scarlet, bloody, prickly or holly1 oak. It is to be found in Kew Gardens lining the Syon Vista, with many new holm oaks having been planted in the Autumn of 2008 to redefine the Vista and make it more impressive for the future. The tree is medium sized with a height of 20 feet and with a spread of 15 feet. It is a very popular, maybe even celebrated, evergreen plant. Its leaves are dark green and glossy on the upper side, yet greyish brown and downy below. They usually stay on the tree for two years. Around April to June the leaves fall, forming a dense mat of tough, brown, leathery leaves which take a very long time to break down.

It is a very common, naturalised oak and may well have been introduced into Britain from the Mediterranean sometime in the 16th Century. It is a hardy, slow-growing tree, and seems to thrive in coastal areas, as it appears to cope well with strong winds and is sometimes used as a shelter tree. The acorns are smaller than those of the English oak but are voraciously eaten by pigs, who find them delicious. It is believed that this food source gives some Italian hams their distinctive flavours. The young green acorns turn a reddish-brown before falling and tend to germinate more easily in the warmer southern areas of the UK. This can cause it to be a little invasive, to the extent that the National Trust uses goats to suppress their growth on the Isle of Wight.

The wood is very strong and durable due to the high concentration of tannic acid which is a good, natural preservative. However, in the past, it was not used for timber, being ignored due to the English oak being the preferred lumber. The Holm oak's use was confined to carts and farming equipment. This use dates back to the Romans who used it for carts and wheels, primarily due to its durability.

The ancient Greeks revered the Holm oak, not for its timber but for its symbolism. Many parts of the tree were perceived to have a meaning or a purpose: the acorn was seen as a fertility symbol, often being turned into items of jewellery or imitations being incorporated into necklaces and bracelets to assist fertility.

The leaves were used in divination, the art of telling the future, as well as being used as crowns of honour, similar to the use of laurel in wreaths by the Romans.

The oak, or holm oak, leaf-mining moth Phyllonorycter messaniella is a particular pest of oaks, and particularly the holm oak. It is a small moth, measuring around 1cm, with a white head and yellow-brown wings. The larvae burrow, or mine as the name implies, through the softer underside of the leaves causing pale brown oval discolourations on the upper surface. The underside is a whitish brown. London Holm oaks also suffer from Ectoedemia heringiella which leaves brown straight lines in the leaves. However the holm oak appears to survive major damage by this pest, although other oaks are not so tolerant and may suffer.

1Holm is thought to be derived from the Anglo-Saxon for holly.