A Celebration of Holly Content from the guide to life, the universe and everything 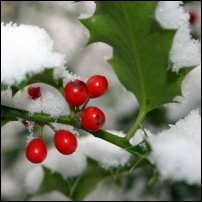 Holly has become an integral part of early English folklore. It easily made the transition with its sharply pointed leaves symbolising the crown-of-thorns and the red berries symbolising the drops of Christ's blood.
– An h2g2 Researcher

Holly is a hardy evergreen tree or bush, which means it keeps its deep-green-coloured leaves all year round. Native through most of Britain and Ireland, it also appears on every other continent except Antarctica and Australasia.

Holly enjoys a position of full sun, but will survive in shady areas. The roots prefer well-drained to dry soil. It can be grown as a small, regularly pruned bush, or allowed to grow into a tree reaching 10m in the UK, and up to 15m (50ft) in other parts of Europe. In woodland, small shrubs will grow under the upper tree canopy.

Large holly bushes/trees, which can be solitary, scattered individuals, are popular roosting and nesting sites for birds like the robin and blue tit. They're not so popular with burglars, though. So a border of holly bushes can be a good deterrent and mean natural security for your property!

Leaves, Flowers and the Wood

Holly leaves are glossy, tough and leathery, with sharp prickles which penetrate even thick gardening gloves. So utmost care should be taken when pruning this plant. The leaves are more rounded and less spiky at the top of the bush compared to the leaves on the lower branches. This is to protect itself from animals such as cows, horses and rabbits which would graze on the foliage.

Holly leaves were once used as a diaphoretic1 and an infusion of leaves was dished up to treat ailments such as catarrh, and even pleurisy and smallpox.

Some holly varieties have their leaves edged with a creamy colour which is highly attractive. Gardeners like variegated leaves – particularly in non-flowering plants. Gold-leaf and silver-leaf bushes have been cultivated to satisfy the 'ready-made' (for Christmas decorations) demands of today's society.

Holly wood is hard and white, close-grained and fine in texture. Once highly polished, it can be used for inlay work and carvings, and is strong enough for practical uses such as riding crops and walking sticks. As firewood, it burns 'well and slowly', according to the rhyme used by Scout leaders.

The adhesive birdlime is a sticky substance made from boiling holly bark for many hours. Left to congeal, it was formerly painted on branches of other trees like willow or birch. The purpose of this was to trap birds which landed on the bitumen-like matter. Birdliming is illegal in the British Isles under the 1954 Protection of Birds Act, and many other countries around the world have similar bans in place.

Just before the berries appear, small white flowers cover the holly bush. Male and female flowers appear on separate trees; they also are slightly different, though the difference is so subtle you would need a magnifying glass to see it. The flowers are highly scented and attract bees and other insects, like the Holly Blue butterfly:

The Holly Blue butterfly (Celastrina argiolus) lays its spring batch of eggs beneath the forming flower buds on the holly stem. After the caterpillar hatches it will feed on the contents of the flower bud. The second-generation-of-the-year Holly Blue will utilise ivy in the same way, laying its eggs in the Autumn.

Scarlet berries appear from autumn to mid-winter. They attract birds such as the redwing, the fieldfare and the blackbird. Some varieties have been bred especially to produce different options from the traditional red berries. For example, 'Amber' has orange berries and 'Bacciflava' bears yellow berries.

Both male and female plants are usually required to produce the berries, but only the females bear them. 'JC van Tol' and 'Pyramidalis' are self-fertilizing varieties.

All holly berries are toxic to humans. Ingestion can lead to nausea, vomiting and diarrhoea, so please teach children not to be tempted to eat the bright berries.

The Royal Horticultural Society has given the European holly bush (Ilex aquifolium) its prestigious Award of Garden Merit (AGM).

Not Just for Christmas

Two thousand years before holly became a traditional symbol of Christmas, the Romans revered it as the sacred plant of their god Saturn. They believed holly warded off lightning strikes and witchcraft, and gave it, with small gifts attached, to each other at Saturnalia, the feast of Saturn. The Anglo-Saxons thought holly had mystical powers because it remained green throughout the winter. Druid priests adorned their heads with holly for some rituals. Pagans create holly wreaths as a symbol of the wheel of life.

Other beliefs include holly as a symbol of immortality and the embodiment of darkness.

Ancient Irish lore states that holly is one of the 'Noble trees of the Grove'.

Some astrologers promote holly as the 'birth tree' of those born between 8 July and 4 August.

Traditional weather forecasters swear by the sign that a greater number of berries on holly bushes in the autumn denotes the severity of the winter to come.

The tradition of hanging a holly wreath on the door began during the 17th Century. And using boughs of holly to decorate inside the home was thought to attract good luck. It was therefore utilised for wedding floral arrangements. Some superstitious householders fixed holly to window frames to ward off witches and evil spirits. Christians later adopted holly wreaths to decorate their front doors during the Christmas season.

Holly leaves are a distinct shape, easily drawn with or without attached berries. They are a simple but interesting shape to cut out when making your own Christmas decorations and/or cards.

Holly leaves and berries are an easily-made colourful decoration for the top of a Christmas cake. All you need is some marzipan (almond paste) and red and green food colouring.

Divide the marzipan between two bowls; add red colouring to one and green to the other. Mix in the green colouring and roll out the green marzipan on a floured board to the desired thickness, using a rolling pin. Use a rounded knife to create your shaped holly leaves; then place them on top of the iced cake. Mix in the red colour to the remainder of the marzipan, and pick out a small amount which you then roll into a ball shape. This can be done in the palm of your hand. Press them almost flat to prevent them from rolling off the cake. Make as many 'berries' as you require and place them between and under the green leaves.

Holly is a surname – perhaps the most famous being rock 'n' roll god Buddy. Holly is also a popular girls' first name, used in real life as well as fiction – like 'Holly Golightly' in the film Breakfast at Tiffany's – and science fiction – for example, 'Holly' was the name of the computer aboard Red Dwarf.

There have been two hurricanes named Holly. The first was in 1969, and winds reached 85 mph. The second Hurricane Holly was in 1976 when the maximum recorded wind speed was 75 mph.

Other names include: the town of Holly Springs in Mississippi, US; Mount Holly in New Jersey; Holly Hill, a city in Florida; and the Holly Mountains in Tibet.

Holly is also immortalised in song and film. There's the popular Christmas carol 'The Holly and the Ivy'. That was also the title of a 1952 film starring Ralph Richardson, Celia Johnson and Margaret Leighton. Green Groweth the Holly was a love poem about faithfulness written by Henry VIII; yes, the king who married six times!

1Causing the patient to perspire heavily.