Frankie Goes To Hollywood - the Band Content from the guide to life, the universe and everything 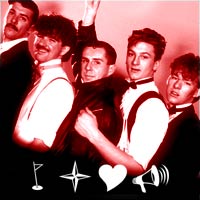 One of the more controversial pop groups of the 1980s, Frankie Goes To Hollywood was formed in Liverpool, England, in 1982, by singer William 'Holly' Johnson, a one-time member of the moderately-successful band Big In Japan1, and guitarist Jed O'Toole. Though O'Toole left the band,his younger brother Mark and their cousin Brian 'Nasher' Nash were drafted in along with drummer Peter 'Ped' Gill to make up the line-up.

Numerous theories have been put forward concerning the origins of the band's unusual name. Nowadays, it is generally accepted the name began life on a magazine cover featuring American showbiz legend, the late Frank Sinatra.

Image-wise, the band was split into two discrete factions: the openly gay Johnson on lead vocals, accompanied by backing singer and dancer Paul Rutherford; and the 'fiercely heterosexual' musicians (collectively known as 'the Lads') Brian 'Nasher' Nash on guitar, Mark O'Toole on bass and Peter 'Ped' Gill on drums.

Welcome to the Pleasuredome

An appearance on the British TV music show The Tube brought the band to the attention of record producer Trevor Horn, who signed them to his newly formed record label, ZTT. The band's debut single, 'Relax', was issued in late 1983. The accompanying risqué promotional video was immediately banned from UK TV. Eventually the single struggled into the lower reaches of the UK Top 40, at which point BBC Radio One DJ Mike Read listened to the lyrics. Despite having already been aired over one hundred times, Read's outrage at the song's lyrical content led to the record's removal from the Radio One play list. Inevitably, the record shot to number one, where it remained for five weeks.

June 1984 saw the release of a second single, 'Two Tribes'. This time the controversial accompanying video depicted a fist-fight between then US and Soviet presidents, Reagan and Chernenko. The single entered the UK chart at number one and spent nine weeks at the top. During this time 'Relax' again climbed the chart and settled in behind 'Two Tribes' at number two. The band's phenomenal world-wide success in the summer of 1984 was due in no small part to ZTT's marketing scheme, which included an astonishing number of remixes of the two singles, and the ubiquitous T-shirts bearing slogans such as 'Frankie Say - Relax - Don't Do It', 'Frankie Say - War - Hide Yourself' and 'Frankie Say Arm The Unemployed'.

Their debut album, the double set Welcome To The Pleasuredome, was released in October 1984 and charted at number one. A diverse set, it included both hit singles to date, the epic 13-minute title track, a spirited take on American singer Bruce Springsteen's 'Born To Run', and an ill-advised stab at Bacharach and David's 'Do You Know The Way To San Jose?'

In the run-up to Christmas, the ballad 'The Power Of Love' was released as a single, with yet another controversial video, this time depicting the Nativity and featuring no input whatsoever from the band (although due to regulations about artists appearing in promo videos at the time, the video was swiftly re-edited to include a frame that contained the band members as angels). Again, the single immediately topped the UK chart.

In 1985, the band released just one single, a heavily cut-down and remixed version of the album's title track, which stalled at number two in March, bringing Frankie's then-record-breaking run of number one releases to an end2. The band's only other release of the year was a suitably pretentious and baffling computer game, which came boxed with yet another version of 'Relax'. However Frankie was not idle, embarking on a world tour that saw original guitarist Jed rejoin the band for their live performances.

Frankie returned to the scene in 1986 with a harder sound, but their moment had passed. The comeback single 'Rage Hard' reached number four, and the second album 'Liverpool' charted at number five, but subsequent singles 'Warriors of the Wasteland' and 'Watching the Wildlife' peaked at 19 and 28 respectively. Their declining popularity, combined with increasing tension between the band's two factions, led them to go their separate ways in March 1987.

After a lengthy legal battle, during which time it was alleged that none of the band played any instruments on the Pleasuredome album, the band members were freed from their ZTT contract. Surprisingly, Rutherford was the first to go solo, but his 1988 single 'Get Real' failed to reach the Top 40.

Holly Johnson's solo career started more promisingly as his first two post-Frankie singles 'Love Train' and 'Americanos' both reached number four, and his debut solo album Blast returned him to the number one position. He also released his autobiography, the cheekily-titled A Bone in my Flute. The resurgence didn't last long, however, and his third single 'Atomic City' remains his last solo Top 40 hit to date.

In 1993 Johnson announced that he was HIV-positive. In the months that followed, Frankie underwent something of a revival as ZTT released a greatest hits album - Bang!. The album was a Top Five success in the UK and prompted the reissue of each of the band's first four singles, accompanied by a fresh set of 1990s remixes. The singles all reached the UK Top 20 second time around, and in typically 'overstated' fashion, ZTT followed up with a compilation of remixes, Reload! Frankie - The Whole Twelve Inches.

Despite the band's short chart career, 'Relax' and 'Two Tribes' still regularly feature in polls of the most popular records of all time. Though Holly Johnson continues to record, releasing an album and a re-recorded version of 'The Power Of Love' on his own Pleasuredome label in 1999, he considers himself more of an artist now.

In 1999, a completely different band toured the US under the name Frankie Goes To Hollywood, but in 2004 an offer from VH1's Bands Reunited TV show almost succeeded in bringing the originals back. Only Holly Johnson declined to revisit the glory days of Frankie. But Paul Rutherford and 'the Lads' realised they wanted to carry on. After playing to a capacity crowd at Wembley Arena as part of a celebration of the career of their former producer, Trevor Horn, the band decided to hold auditions for a replacement for Holly. 28-year-old West-End singer Ryan Molloy impressed them with his strong vocals and confident stage presence and found himself invited to join Frankie (with Jed O'Toole once more a member of the band) on their first tour in nearly 20 years.

1Big In Japan's line-up included Bill Drummond, who went on to form The KLF and Ian Broudie, who formed The Lightning Seeds.2Fellow Liverpudlians Gerry and the Pacemakers were, at the time, the only other act to have reached number one with their first three singles; Frankie also bagged a number one album, though their record was eventually broken in 1999 by Irish pop band B*witched.