Blue Butterflies Content from the guide to life, the universe and everything 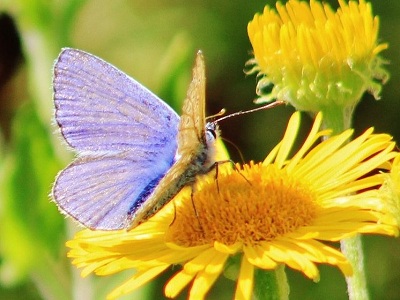 Butterflies have been described as Mother Nature's masterpiece. There is a huge range of family orders featuring multicolour, monotone and block colour members, both large and small. This Entry is specifically about blue butterflies.

Usually in the animal kingdom it is the male who is the more attractive sex – think how colourful and showy the peacock is when compared to the dowdy peahen. This is an evolutionary trick because it is the female who needs to be well-camouflaged when brooding. Male attractiveness is also the rule in the butterfly world; the most glorious specimens are generally males, with females of the same species being smaller and much less colourful, even, in some cases, being sexually dimorphic (a different colour altogether). One such example is the Chalkhill Blue: the male is pale blue with dark blue edging on the wings, while the female is mostly brown with a white fringe. An exception, and perhaps the most stunning dimorphic blue butterfly, is the female Diana Fritillary1. She is a Royal blue with white-speckled forewings and a stripe of paler blue on the hindwings. The male Diana Fritillary is brown and burnt orange. Arkansas has appointed the Diana Fritillary as its state butterfly.

Some Blue Butterflies of the World

The abundant Southern Blue is native to New Zealand; it has a lighter underside with dark zig-zag patterns, which help conceal it when it takes off. Watchers have described this butterfly as 'disappearing into thin air'. A blue swallowtail butterfly, the Ulysses, which lives in the Daintree Rainforest in Queensland, Australia, represents tourism for that area.

Some butterflies are native to certain areas, while others are widespread over whole continents. Obviously if a certain butterfly comes from your area then you're going to claim it as such; case in point: the Colorado Hairstreak is the state insect of Colorado. Also, the rare Sand Mountain Blue is only found around the Sand Mountain region in Nevada. The Holly Blue butterfly is named after the spiky-leaved holly bush where it lays its Spring batch of eggs beneath the forming flower buds. After the caterpillars hatch they feed on the holly flower buds. However, the second-generation-of-the-year Holly Blue will utilise ivy in the same way, laying its eggs in the Autumn. This is because in the Autumn the holly bush is covered in bright red berries which are food for garden birds such as blackbirds, who wouldn't say no to a tasty caterpillar or two.

We had reported the real-time field evolution of colour patterns of this butterfly in response to global warming before, and [because] this butterfly is found in artificial environments – such as gardens and public parks – this butterfly can monitor human environments.
– Prof Joji Otaki of the University of the Ryukyus, Okinawa, Japan.

The Pale Grass Blue butterfly had been an environmental indicator for at least a decade before the devastating tsunami in March 2011 engulfed parts of Japan and caused an accident at the Fukushima Daiichi nuclear power plant. Specimens of the Pale Grass Blue butterfly were collected by Japanese researchers after the nuclear incident. Among the severe abnormalities found were malformed wings, under-developed eyes and discolouration. When these affected butterflies were bred, their offspring exhibited further detrimental traits like irregular antennae.

There's no reason to believe there will be an increase in deformities and mortality rates of any other species, including people, according to Japan's well-known radiation expert Prof Shinzo Kimura. Fukushima residents, who can't afford to leave the area, must be relieved to hear that.

Status of the Blues

A worldwide study by the Zoological Society of London has found that one in five invertebrates is at risk of dying out. Factors include pollution, habitat loss and climate change. Insects, including butterflies, pollinate fruit trees and other crops which feed people, so it stands to reason we should be doing all we can to help these small creatures survive. If you want to help conserve butterflies, you can grow insect-friendly plants in your garden. Female butterflies are very particular about where they lay their eggs; the preferred location varies from species to species. They will always lay on, or close to, the food source of the caterpillars, which basically just eat and eat until they are fully grown and ready to become a chrysalis. Some will lay their eggs on the leaves of stinging nettles. According to the Garden Organic website, nettles provide nourishment and shelter for many beneficial insects, if you can bear to leave them in situ. Plants loved by adult butterflies include buddleia, lavender, ice plants, French marigold, honeysuckle, viola and wildflowers. Spring flowers are essential for feeding butterflies fresh from hibernation, and late-Summer/Autumn flowers provide butterflies with the nourishment they require for overwintering. If you aren't lucky enough to have a garden, you can contact your local wildlife or conservation centre to find out what else you can do to help. 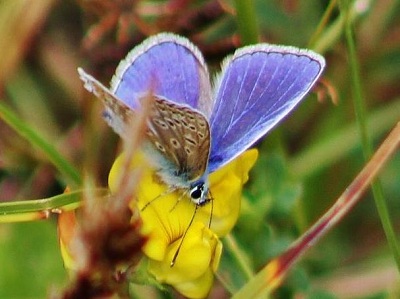 Although some species of butterfly and other beneficial insects such as bees are threatened due to environment changes and loss of habitat, luckily some blue butterflies are quite prolific. Not all abundant butterflies have been named 'Common', thank goodness, or this would be a dull article. Just two, the Common Blue and the Common Grass Blue are going to be noted here. The Silver-studded Blue can be found in most parts of southern England as well as Europe and Asia. Other delightfully-named blue butterflies are the Dusky Blue Cupid, Eastern Tailed-blue, Rocky Mountain Dotted Blue, Zebra Blue, African Babul Blue, Albocerulean, Black-spotted Pierrot, Blue Quaker, Ceylon Blue Glassy Tiger, Dark Ceylon Six-line Blue, Forget-me-not, Spring Azure and the Summer Azure.

The Large Blue was last recorded on Dartmoor in Devon in 1979, after which it was declared extinct in the UK. Thanks to an extensive, well co-ordinated conservation plan, Large Blue butterfly eggs were imported from Europe and distributed among 11 specially-selected UK sites, including Collard Hill in Somerset and the Daneway Banks Nature Reserve in Gloucestershire, which are open to the public. Other sites such as the Green Down Nature Reserve in Somerset can only be accessed by members of Butterfly Conservation and the Somerset Wildlife Trust. The Large Blue butterfly has been so successfully reintroduced that it should probably be renamed the Lazarus Blue; in 2010 the adult count was estimated at 20,000. Phase two of the re-population was funded by the health-food retailer Holland & Barrett. Caterpillars of the Large Blue were reared and released at two nature reserve sites in Gloucestershire, details of which have not been publicly revealed.

The Sinai Baton Blue is the world's smallest butterfly, their wingspan is a mere ½in. It is facing extinction due to goats grazing on their host plant and its overcollection for medicinal purposes. The Sinai Baton Blue butterfly is a symbol for the Egyptian Endemic and Endangered species in Egypt.

The Long-tailed Blue somehow made its way to Hawaii, where it has thrived. Being welcomed there has led to a healthy population of adult butterflies which delight the Hawaiian people and tourists alike.

The Mazarine Blue, while still widespread in Europe, has been extinct in the UK since the end of the 19th Century. One of the reasons for its demise is thought to be the lack of Red Clover, the foodplant of the Mazarine Blue caterpillar, probably due to the advancement of farming techniques.

The Xerces Blue lived only in the coastal sand dunes of the San Francisco Peninsula, which was geographically isolated and had the perfect climate for this particular blue butterly. As far as we know, the last specimen was reported in 1941. Where it used to thrive is now part of the Presidio of San Francisco. The Xerces Blue has the dubious distinction of being the first butterfly to become extinct due to habitat loss caused by the encroaching building projects of mankind.

Each extinction is a unique voice silenced in a universal conversation, of which we ourselves are only one participant. When the tiny wings of the last Xerces Blue butterfly ceased to flutter, our world grew quieter by a whisper and duller by a hue.
– Mark Jerome Walters, author of Six Modern Plagues and How We Are Causing Them

Thanks to Frank Gray for the photographs of butterflies for this entry.

1This butterfly belongs to the Nymphalidae family, which includes the Admirals, the Emperors and the Tortoiseshells, as well as the Fritillaries.2State butterfly of New Hampshire.3Long-tailed Blues were placed on the non-regulated non-quarantine pest list in 1997.