Queensland, Australia Content from the guide to life, the universe and everything 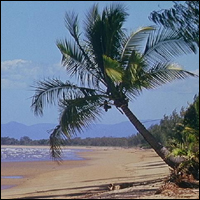 Queensland is the big chunk of northeast mainland Australia. The state is just west of the Great Barrier Reef and shaped a bit like an isosceles triangle that points up, almost accusingly, at Papua New Guinea. There is little point in giving its dimensions, because it's just so incredibly huge, compared to, say, Belgium. The first sign you see after you've come out of the airport at Brisbane reads: Cairns 1699km.

Queensland was settled by many Europeans along the coastline – the beaches being beautiful – then they headed inland. The locals didn't like this much at the time (during the late 1700s and early 1800s) and put up a fight, but the Europeans just took the land anyway. Queensland is rich in minerals, sugar cane plantations, tropical fruit and tourism nowadays, and the banana benders1 are seeing their state become increasingly Asian, with people from Japan, Korea and Indonesia now calling it home. The original tenants are still there though, even after hundreds of years of everyone else trying to evict them.

The capital of Queensland is Brisbane – often referred to as Brisvegas, due to the ever-increasing number of casinos springing up there. Aside from this 'leisure industry', Brisbane is a city that rivals the other state capitals in not only music, food and recreation, but also pleasantness. Often thought of as a big city with a small town mentality, the people there are relaxed and enjoy a very cosmopolitan way of life. While 'Brizzie' is sometimes regarded as the slower little brother of Sydney, it has been very forward thinking. Not only was it the venue for the World Expo in 1988 (although many people have forgotten this fact, due in part to Sydney holding the Olympic Games2) it has welcomed many new cultures with open arms – if you want some good yakitori, Brisbane is your place: the Japanese food there is supreme!

Queensland is a state with a strange appeal. When many people think of the Australian accent, they tend to think of Crocodile Dundee, or Steve Irwin, who both happen to call Queensland home. Their thick drawl could be blamed on the slow-pace of life 'up north' - due to the fact that it's usually pretty damn hot, so people take it easy. And taking it easy is what Queensland is all about. Near Brisbane is the beach resort of Surfers Paradise, the sun-worshipping capital of Australia, where there is more tanned skin than Essex will ever see, but just as many bottle-blondes. Other attractions include what's off the Sunshine Coast: the many islands and reefs are no strangers to fishing, surfing, scuba-diving and rich billionaire playboys' yachts. Inland, there are things like the Big Pineapple3, rainforests, cane toads, sudden downpours that do nothing to relieve the humidity, and lots of not much else except mangrove swamps.

Bananas, pineapples, guavas, mangoes, lychees. Some of the many tropical fruits grow in abundance in Queensland, and you won't be able to go into any restaurant in the state without having something tropical on the menu, even if it is just a drink with an natty paper umbrella shoved in the top. Queenslanders aren't fancy, they take the rough with the smooth, so food and drink is just simply what you're given. Sure, the holiday resorts and hotels will lay it on thick because they have to, but the real Queensland is where you'll drop into the pub, have yourself a cool beer, a prawn salad sandwich and a banana split for a late dinner - at about 11pm when the temperature has dropped to a balmy 22°C.

Don't forget, too, Queensland also happens to be the home of XXXX. Well, nowhere's perfect.

1Slang for a Queenslander.2And don't you forget it!3A rather large concrete building shaped like a pineapple stuck in the middle of nowhere. A mecca for tropical fruit lovers, it seems.