The Cane Toad - Australia's Amphibian Plague Content from the guide to life, the universe and everything 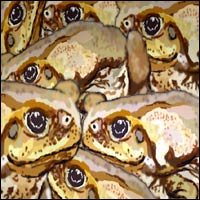 Cane toads (Bufo marinus) are aggressive, warty creatures which can grow to 26cm long (10 inches), and weigh up to 2.5kg. The cane toad is armed with a powerful poison (bufotoxin1) situated in two glands (sacs) behind its head. Toxins are also present in their skin, muscles, bones and bodily organs; and in their spawn (eggs) and offspring (toadlets).

The toads reach sexual maturity at 12 months, then breeding season begins in early spring up to autumn, when 8,000 to 35,000 eggs will be laid by the female. All the eggs are fertilised by the male but only approximately half of one percent will become adults. The eggs hatch within three days, and the tadpoles grow into toadlets capable of fending for themselves after two to five months maturity.

The nocturnal cane toads were introduced to tropical Australia from Hawaii in 1935 to eradicate cane beetles, which were destroying crops. Unfortunately this experiment proved unsuccessful, with the toads developing a more eclectic taste in food. Since gaining the freedom of the Australian bush, the toxic amphibians have thrived in the abundant billabongs2 feeding on the plentiful and tasty insect life. They will also eat frogs, small reptiles, mammals and birds. Daring toads will invade homeowners' gardens and raid any unemptied pet food bowls.

The toads have now multiplied and spread across the country in plague-like numbers, covering the remote Northern Territory at a rate of about 100 kilometres (62 miles) a year. They are eaten by creatures who mistake them for native frogs, and their poison kills snakes, kangaroos, dingoes, lizards, quolls (see below), water birds and crocodiles quite quickly. This is having a devastating impact on native Australian wildlife and threatening some species with extinction. There are fears that hundreds of Aboriginal communities will be severely affected because the toads are killing off their traditional food sources.

It is estimated there could be as many as a hundred million cane toads; officials in Western Australia have asked for the army's help to exterminate them. A 15km (10-mile) fence was constructed around Gurig National Park in an attempt to try and block the toads' advance on it in 2001. Wildlife experts say there is no chance of halting the invasion of Australia's world-famous Kakadu National Park, because the remoteness of the park's extensive rivers and swamps are too difficult to defend. A recent study in Kakadu National Park found that the Northern Quoll (a medium-sized carnivorous marsupial listed as a threatened species) had disappeared from sites where cane toads had recently arrived.

The short-term impact is disaster. Large numbers of indigenous creatures are going to die and I think it's fanciful to believe everything will recover and we'll all learn to live with cane toads.
- Australian amphibian specialist Mike Tyler.

There is evidence suggesting that the toads' impact is relatively temporary. Within five years most species - perhaps barring the Southern Tiger Quoll - would probably have learned either to avoid them or to eat them without being poisoned.

WildWatch now lists the cane toad as Queensland's number one 'most significant pest'. Cane toads have few predators, although some birds and rodents have learned how to make a meal of them. Once the toad is dead, its abdomen can be exposed and the toxin-free internal organs eaten.

Government advice on how to tackle the problem has been quite brutal:

People should beat them to death with a golf club or a cricket bat.

This, of course, has outraged animal welfare group representatives who suggest a 'kinder' way of disposal is to place them in a freezer until they die. People should wear rubber gloves3 while handling the toads and then put them in plastic bags, before putting them in the freezer. Although nothing is stated about what to do with them afterwards, it goes without saying that they shouldn't be ingested by humans, even accidentally, so burying them would be a good idea.

The authorities in Australia's tropical northern region were so desperate to stop the toads that they offered a reward for the discoverer of the most effective way to get rid of them. Inventor Andrew Arthur believed his 'toad blaster' - a battery-powered loudspeaker system which imitates the sound of a toad - was the answer to this environmental disaster.

I'd see it working most effectively on the front line where the toads are crossing rigs lines, looking for places to breed. This call comes out, the toads would think... 'oh, this toad has found a great place to breed, let's go there'. As they move towards the designated area, the toads could then be trapped.
- Inventor Andrew Arthur

The winner of the competition to make the most effective toad trap was Paul Baker from Katherine in the Northern Territory.

The skin of the humanely killed toads can be treated and turned into useful leather items such as mobile-phone covers, lighter cases, hat bands, shoulder bags, key fobs, coin purses and golfball holders.

A Warning About Dogs and Cats

One h2g2 Researcher reports that both of her dogs are addicted to toads and she cannot let them out after dark without supervision. The dogs will lick or 'mouth' toads until they get 'high' (like drug addicts), stagger indoors foaming at the mouth, then sleep for 12 or more hours.

This behaviour is not good for their hearts, and may cause organ damage in later life. Their vet says it is quite common for dogs to deliberately go out of their way to find toads to lick. Small dogs and puppies, sick or elderly dogs, and cats are likely to die if they ingest the poison. Pet owners are advised to keep dogs and cats indoors at night, and train them4 not to lick or mouth toads. The dogs' mouths need to be washed out as soon as any foaming and/or staggering is noticed, and veterinary advice should be sought.

This problem is not just rife in Australia but also in Hawaii where the 'bufo' (as the toad is known there) is indigenous.

Scientists are hopeful a natural predator of the toads has been identified, following study in virgin cane toad areas. Initial trials involving a native frog, the Litoria dahlii (commonly known as the Northern Waterfrog and Dahl's Frog), have been quite successful:

Well, we've been monitoring the invasion of the cane toad into pristine, well, not pristine, into a cattle station actually, but into new habitat where the cane toads haven't been before, and we were watching a couple of billabongs - for some reason they were being successful and breeding in one billabong, and in another spot they were being completely unsuccessful. We looked at this place and thought 'What's going on here?' Some native frogs, Litoria dahlii, were very common in the second billabong. We knew dahliis were animals that ate other frogs, so we put some into a terrarium with 17 infant cane toads. Basically, within three days, the dahliis had eaten the lot. The most interesting part was that the dahlii showed no ill-effects from eating them. A couple of weeks later, we gave them some cane toad tadpoles, and they happily munched their way through 27 of those with no repercussions either. So it would appear from our initial trials, certainly in captivity anyway, that these frogs are able to eat cane toad tadpoles and metamorphs without dying.
- Graeme Sawyer, co-ordinator of Frogwatch Northern Territory.

A Tale of Two Snakes

Two species of snake, the red-bellied black snake (Pseudechis porphyriacus) and the green tree snake (Dendrelaphis punctulatus) have adapted to cope with the threat from the cane toads. In what has been described as 'a classic example of contemporary evolution', the snakes have evolved to defend themselves. Their heads have shrunk in relation to their bodies, enabling them to eat only much smaller prey than the poisonous toad. It seems incredible that this evolution has occurred in just 70 years, but since the cane toad arrived in their neck-of-the-woods, some 20-plus generations of snake have had time to adapt.

1Bufotoxin is used in oriental medicine; and a derivative of bufotoxin is an ingredient of a Japanese hair-restorer.2A billabong is Australian slang for: a swamp; a backwater; a bayou; a pond or large pool of water (US: playa) usually out in the middle of nowhere; an ox-bow river or watering hole. A billabong is mentioned in the popular Australian song 'Waltzin' Matilda'.3The toxin can cause people intense pain, temporary blindness, and inflammation.4Or attempt to, in the case of cats.