The Garden Pea Content from the guide to life, the universe and everything 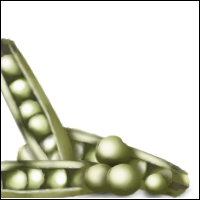 This subject of peas continues to absorb all others. Some ladies, even after having supped at the Royal Table, and well supped too, returning to their own homes, at the risk of suffering from indigestion, will again eat peas before going to bed. It is both a fashion and a madness.
- Madame de Maintenon (1696)

The botanical name is Pisum sativum and today they are the most popular green vegetable in Britain. As well as garden peas, there are three more types of Pisum sativum in cultivation today: a traditional old starchy variety called marrowfat peas (mushy peas are produced from them); the mangetout/sugar snap type (they 'snap' like french beans when broken) where you eat the whole pod; and petits pois, a miniature variety of the garden pea.

Peas are green beans, and technically, they're not a vegetable, they're a legume. Legumes are dry fruits which develop from a simple carpel and usually dehisce1 on two sides. A common name for this type of fruit is a 'pod'.

The pea was one of the earliest cultivated food crops, with pea cultivation spreading throughout Europe, India and China by 2000BC. Apicius, author of Rome's 4th-(or early 5th-)Century first cookbook, has nine recipes for cooking peas, some of which are cooked with other vegetables and herbs, while other methods combine peas with meat, poultry and seasonings.

Dried peas became a staple food of European peasants during the Middle Ages. This is because peas were cheap, plentiful and when cooked made an inexpensive, filling, wholesome meal. They could survive storage throughout the long winter months once they had been dried. Charlemagne, the Emperor of France, grew peas in his gardens around 800AD.

At the end of the 14th Century, the Italians had cultivated a dwarf variety of peas called Piselli novelli which were to be eaten fresh. When Catherine de Medici of Italy married Henry II of France in 1533, she brought many of her favourite foods with her, among which were Piselli novelli. The tasty new peas were so different from the peasant fare that a new fashion craze was started in French cuisine. The French called their flavoursome tiny peas petits pois, a name that remains today. The French town-names of Saint-Germain and Clamart were incorporated into the titles of recipes which included petit pois. Thomas Jefferson, who was elected the third president of the United States in 1800, was an avid gardener, who thought so highly of peas (they were his favourite vegetable) that he cultivated 30 varieties of them.

Pharaoh Tutankhamun (1341 - 23BC) was buried with over 5,000 items2 in his burial chamber, things the ancient Egyptians considered essential for the afterlife, like his chariot and personal belongings. Some were food items, and one was a jar of liquorice, which is made from the root of a blue flowering pea-plant found growing wild in South Europe and Asia. The plant, botanical name Glycyrrhiza glabra, means sweet root.

Peas are the time-clock of the garden. They are the first vegetable to be planted, and the first to be harvested. Peas thrive in cool and moist weather. Vine peas require a trellis to support them. Bush varieties grow up to five feet high and can be clumped together for support. Check the plants three weeks after flowering has commenced. Pods that are shiny and plump are ripe. Over-ripe pods will be dull and the peas inside will be starchy as the sucrose will have turned to starch.

Crop rotation is important to avoid the build-up of pests and diseases in the soil. A sunny, open site with neutral to alkaline soil that is well-drained and moisture-retentive is ideal. Peas should only be replanted in the same place every fifth year. The annual pea harvest has to be planned with military precision. The crop is harvested when it's at the highest quality, if it's left too long it becomes starchy and useless for freezing. To pick your delicious peas, hold the vine with one hand, and tug on the pod with the other.

There are 40,000 hectares of peas grown in the UK each year, that's equivalent to about 80,000 football pitches. This produces 160,000 tonnes of frozen peas, which is equivalent to two billion 80g portions.

Peas are a good source of vitamin A, vitamin C, folate, thiamine (vitamin B1), iron and phosphorus. They are rich in protein, carbohydrate and fibre, and low in fat. Peas may help prevent certain types of cancer: for example, in one study they were linked to lower rates of prostate cancer. They are good for the heart because they are a rich source of soluble fibre, which enables the body to reduce its blood cholesterol level. They may also protect against appendicitis. On the negative side, they contain oestrogenic chemicals, and so may decrease fertility in males.

The Department of Health recommends five portions of fruit and vegetables per person per day to help reduce the risk of some cancers, heart disease and many other chronic conditions. Three heaped tablespoons of cooked peas counts as one portion.

It is a myth that vegetables lose their vitamin value during freezing - the opposite is usually the case. Unless they are plucked straight from the garden or allotment, frozen peas are more nutritious because the goodness is 'locked in' at the freezing factory. When boiling frozen peas, you should use only enough water in the pan to cover the peas, bring them to the boil, cover the pan and simmer for three minutes. The less water you use, the less vitamin C is lost. Don't throw away the water, use it to make a vitamin-rich gravy.

Garden peas add colour and flavour to a great variety of dishes. They are an integral ingredient in Chinese Fried Rice and many Chinese takeaways. You can add peas to pizza toppings, risotto, kedgeree, omelettes, pastas, soups, salads, casseroles and curries. Peas can also be eaten raw:

The best way to eat them is straight out of the pod. Mmm... We used to pick them from the local farm, shell them for Sunday lunch and eat more raw than ever got cooked. They taste so much better raw, I've no idea why people started cooking them!
- A Researcher

'Rice and Peas' is a popular Jamaican dish made from rice cooked with kidney or gungo peas, various seasoning, and coconut milk.

This is a simple recipe which can use up leftovers. It requires cooked rice, a can of well-drained tuna flakes, cooked peas, raw (washed) tomatoes - sliced into small segments - and a good dollop of salad cream or mayonnaise. Sweetcorn may also be added if required. Mix the whole lot in a large bowl and serve with salad or eat on its own.

How to Eat Peas Properly

Eating peas was traditionally regarded as a test of good table manners. Anyone who couldn't manage to get the peas on their fork, convex (the curved top) side up, and ended up using the concave side of the fork like a spoon, was looked down upon. To eat peas properly, prod a few peas onto the prongs of your fork. Now scoop more peas onto the convex section, which will be kept in place by the pronged peas.

An Ode to Peas

I eat my peas with honey
I've done it all my life
It makes the peas taste funny
But it keeps them on the knife!
- Anon

Gregor Mendel3 (1822 - 84), an Austrian monk, cultivated and tested 28,000 pea plants in order to study variation in plants. Simple testing and experimentation with typical and atypical varieties gave birth to the idea of heredity. This later became known as Mendel's Laws of Heredity or Mendelian Inheritance4.

1Opens along a seam.2It took Howard Carter over ten years to catalogue them all.3Now known as the 'father of genetics'.4Also known as Mendelian genetics or Mendelism.