Traditional Christmas Cake Content from the guide to life, the universe and everything 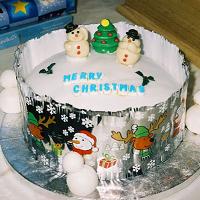 The origins of the modern-day Christmas Cake complete with almond paste or marzipan and white royal icing are obscure. Early versions, during the Middle Ages, tended to be more in the style of sweetened bread with fruit added. No mention is made, in these early recipes, of marzipan which, at the time, was called marchpane and used, along with fresh fruits of the season, candies, nuts, sweetmeats, spiced cakes and other delicacies on or around the 6 December. This was the day when Saint Nicholas was reputed to visit the house with gifts of gold1 and sweets including gingerbread and marchpane.

A recipe dating from 1730 shows that the UK was already preparing rich fruit cakes although it was actually called 'Plumb Cake'. Among the ingredients for this were (with original spellings):

The method employed was to simply mix all the components together and leave for a few hours to 'prove' and 'rise', then cook in an open fire. The Icing was formed from

doubt icsind sugar' and 'ye whites of 4 eggs put in but one at a time. Beat them in a bason with a silver spoon till tis very leight and white.

This early forerunner of the Christmas Cake would have only been available to the more well-off families due to the high price of the ingredients.

During the next 100 years conditions in the kitchen improved with the introduction of stoves equipped with ovens and water boilers. More cooking utensils, including a better range of pots and pans, became available and flour was 'rolled' rather than 'stone-ground' to produce a much finer grain. By the early 1830s more exotic foods were being imported and packaged goods sold in shops. Self-raising flour, baking powder, quick-acting yeast, custard powder and tinned goods opened up a whole new world to the cook, as did reductions in the price of sugar, fruit and other imports. Almond paste and icings of all varieties were now used for most cakes and cake decoration was considered an art form.

Try to make the cake a few weeks before Christmas to allow the outer edges time to dry before applying the almond paste although freezing the cake seems to do the same trick. If you do decide to freeze it make sure that no water can get in. A basic rich fruit cake will keep for several months or even years if it is cooked properly. If you intend icing the cake make sure that you use plain flour as self-raising flour may cause the top to crack. This recipe requires a 9" (22.5 cm) cake tin, 3½" (10cm) deep.

A tip for those who like more alcohol in their cake. About 1 week before you intend adding the almond paste unfreeze the cake. Use a metal skewer to make a few small holes in the top and gently pour in a few drops of brandy or another liqueur. Cointreau or Grand Marnier are compatible flavours but avoid coffee or chocolate-based ones!

There are many ready-made pastes available but making your own allows for adjustment of the flavour. This recipe should make enough to cover the cake with some left over. With the addition of a little food colouring the remaining paste can be shaped and formed into leaves, flowers and fruits. Alternatively you can paint the colouring on with a small brush as the paste will absorb it.

If preferred, only the top of the cake need be iced and the sides wrapped with a festive cake band. In this instance use a quarter of the ingredients to make the following two recipes.

Traditionally this icing should be pure white and set fairly hard. It can either be smoothed over the cake in order for more intricate piped decorating or teased into 'peaks' for a 'snow scene' effect. There are plenty of ornaments available for Christmas Cakes, both edible and inedible and some excellent ready-to-use piping sets in a variety of colours.

1A dowry gift for young, unmarried ladies.2Or other flavour of choice.