Kew Gardens' Important Trees: Caucasian Elm - Zelkova carpinifolia Content from the guide to life, the universe and everything 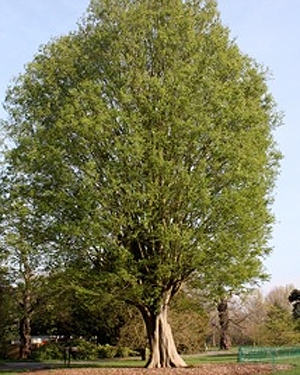 The Caucasian elm is an 'Old Lion' of Kew Gardens, dating as it does from 1762, the year of the planting of Princess Augusta's first arboretum. However, it is not in the same location as the other 'Lions', and it has been discovered that it was planted outside the original arboretum and was not part of it.

It may have been one of the first batch of these plants to be introduced into the UK from the Caucasus. The tree was planted, with two others which no longer exist, in the location which is now the herbarium paddock, which unfortunately is not open to the public. However there is a second extant plant near the Brentford gate, although believed not to be as good a specimen. Little is known about them. It is believed that only a few were brought into the country at that time, an example being the tree in Wardour castle, although another batch was shipped in from Persia1 in 1782 by André Michaux2. Interestingly, according to the Kew Gardens records, one of the largest can be found at Tortworth Court Hotel in South Gloucestershire, standing at over 30m high with a girth of 6.25m.

The tree in the herbarium was recorded at 60 feet (18m) in 1905, although they can grow to 100 feet (35m). It has a distinctive crown, sometimes referred to as vase-shaped. The leaves are bluntly serrated, around 2-4 inches (4-10cm) long, and around 1-2 inches (2-6cm) across. The flowers are typical of elms, being inconspicuous, pale green in colour, and with no petals. The flowers are wind-pollinated and, after pollination, produce a small 2 inch (5cm) nutlet seed. Little else, unfortunately, is known about this tree, rather surprisingly for being a designated special tree in Kew!