The Violin Bow Content from the guide to life, the universe and everything 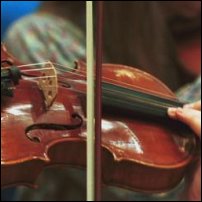 Although the violin can be plucked1, most of the time it is played with a bow. The bow is drawn across the strings and the friction causes the string to vibrate, producing sound. The earliest violin bows consisted of a convex2 stick to which a skein of horse hair was tied and tensioned. Such bows, with their outward curving sticks, remained in use during the Renaissance period and beyond. The dimensions of the bow have changed considerably during its development. It was during the latter part of the 18th Century that the modern violin bow was developed and brought close to its present form by Francois Xavier Tourte (1747 - 1835) and since this time the overall length has settled at around 74cm.

The bow consists of the stick, which is usually made from wood; the hair, which is generally horse hair but there are synthetic alternatives; the tip, or 'pointed end' furthest away from the player's hand; and the frog, or heel, of the bow. The frog is the square-shaped end, often ebony but sometimes tortoiseshell, or ivory, and often inlaid with a mother-of pearl 'Paris eye'. The hair joins the frog and this is the part that adjusts the tension of the hair using an adjuster (a screw) at the end of the stick. The thumb is placed near the frog with the fingers over and above the stick. The little finger on the top of the stick near the adjuster acts as a counter-balance 3. The bow is balanced with the centre of gravity at 19cm from the frog; this is achieved by binding the stick just above the frog. This binding can be metal such as silver, silk or whalebone and helps to balance the weight of the tip. The length of hair is around 65cm and the modern day bow weighs around 60g.

Early stringed instruments were plucked and pre-dated bows, but bowed instruments, such as viols, were around before the present-day violin. In fact the Chinese erhu, an instrument which bears some resemblance to the violin, was the first instrument known of to have been played with a bow, and was around in 800AD.

Early (pre-1800) bows went through several transitions. These early bows are now categorised by the famous violinists who used them, rather than by the makers themselves. Thus we have the Corelli bow c1700, the Tartini bow c1740 which was somewhat longer, the Cramer bow c1770, until with the Viotti bow c1790, now known as the Tourte bow, the stick became concave and more recognisable as the predecessor of the violin bow of today.

From 1855, French bowmaker Francois Nicholas Voirin began to make radically different bows from the Tourte model. The stick and head became thinner and smaller, and he used only the finest pernambuco4. These bows are still much sought-after today and the design has not changed. Purist Baroque musicians, however, will still prefer to use the convex, shorter bow with pike head.

The design of the modern bow has the stick with a concave curve and pressing the bow hairs against a violin string causes the stick to bend towards the bow hair. The result is that the tension on the bow hairs increases, causing them to be deflected only slightly by the extra force. The stick has a round or octagonal cross-section, and tapers from the heel to the tip.

In the best modern bows, the stick is made of pernambuco wood because of its density, strength and resilience. However, bows are also made from other, less rare types of wood, such as brazilwood, and now some makers are experimenting with man-made materials such as carbon fibre, and these bows are now gaining credence as light weight, strong and very responsive alternatives.

How the bow works

The working part of the bow is made from horse hair, with as many as 180 strands used in a violin bow. The frog enables the tension of the bow hairs to be adjusted. Too much tension and the bow will bounce on the strings, not enough and the bow hair will come into contact with the stick during playing. The bow is tightened using the adjuster near the frog end of the bow for playing, and loosened when not in use to prolong the life of the bow, otherwise the tension on the stick can cause the bow to warp and become irreparably damaged.

For the bow to work it must have a light coating of rosin. Rosin is a sticky resin derived from the sap of pine trees. It is supplied in small blocks which are rubbed on the bow. It is the rosin which provides the appropriate frictional forces needed for the violin bow to grip the strings and cause them to be excited into vibration when bowed. Residue rosin that ends up on the violin and strings, from the bow, must be wiped off with a soft cloth after playing so as not to damage the varnish and strings of the violin.

A rule of thumb is that the value of the bow should be up to a third of the value of the violin on which it is to be played. High-quality bows from the top makers, such as Voirin or Sartory, can sell for tens of thousands of pounds. A bow is a very personal choice, some violinists preferring heavier or lighter bows, and some seem to work better with some violins than others. When buying a bow it is therefore advisable to have a selection of several bows in your price range to try over a period of time with your violin. Most dealers are happy to let you take a few bows on approval to try with no obligation. As with many violins, some bows can be quite old and it is crucial that you check for damage, repair and straightness of the bow. Well-repaired bows can still be very serviceable but this should be reflected in the price asked.

Looking after your bow

Depending on the amount of time you spend playing, your bow should be re-haired fairly regularly, probably about twice a year. Bow hair tends to break and can also wear over time, and can tend to be lost from the right side, which bears most of the playing. An unevenly-haired bow will cause uneven tension on the stick and thus can cause the stick to warp. Although re-hairing is a job for the experienced it can be done fairly simply. A newly re-haired bow will require a lot of applications of rosin before it can be played. It is crucial after playing to ensure that the bow is detensioned to avoid risk of it warping, and any rosin is wiped from the stick as the acidity can damage the varnish if it is allowed to build up. Bows can be very fragile and can easily break near the tip where the stick is very narrow, so much care must be taken to handle it carefully and never to leave it where it could easily get knocked or damaged. After playing it should be carefully stowed away in the case.

1This is called pizzicato. 2Meaning it curves towards the hair. If it curves away it is convex.3Baroque players and folk fiddle style players prefer to hold the bow further up the stick at the balance point. 4A reddish wood from Brazil.