Graffiti Content from the guide to life, the universe and everything 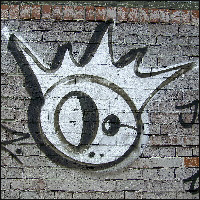 Graffiti is an expressive art form that has grown out of the feelings of insignificance and invisibility created in the minds of street youths by an uncaring society. Graffiti takes on the form of intricate illustrations, typically created with cans of spray paint, and stylised text on whatever surface presents itself.

Many consider it a point of pride to not only create an elaborate, brilliantly-hued image or message, but to do so in a location as unlikely and seemingly unreachable as possible. The sides of train cars, public areas such as rest rooms and telephone booths, and street signs are the most frequent 'canvasses' for the graffiti artist.

Graffiti is often the only creative outlet for underprivileged youth, especially in dense urban areas. For many graffiti serves as a way to make a cold, racist society recognise that every person has worth.

For others, graffiti is simply the annoying scribbles scratched onto every available surface by slackers.