The Squirrel Proposition Refuted Content from the guide to life, the universe and everything 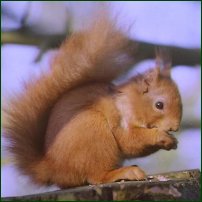 So, if the squirrel will always stay level with and opposite the photographer, no matter what happens, does the photographer move in a circle around the squirrel? The situation can also be modelled quite nicely by spinning your hands around each other, or by looking at the motion of a pair of figure skaters (A short online video of figure skaters is available after a quick download.). The reason we ask this question is not because we are interested in whether the poor photographer ever has a chance of catching the squirrel, but because we are interested in the strange form of movement involved. However, the motion is in fact so strange that those looking at it usually fall into two camps with differing opinions:

Semantics - To Circle Or Not To Circle

Before looking at the details of the puzzle, it is important to remember that languages can be funny things, and the use of semantics can allow multiple viewpoints to be correct, provided that the correct wording is used. For instance, if we were to ask 'does the photographer move around the squirrel?', then we would have to ask ourselves carefully what we meant by 'around'.

The first step is usually to visualise the problem, which leads to the question but what exactly do you mean by 'circle'? For starters there are the two obvious answers - circling meaning to orbit the squirrel as it goes around the tree, and circling meaning to move in some other sort of circle around the squirrel. The former is obviously not possible, but the latter would seem possible provided that the describing of a circle by the photographer around the area in which the squirrel is moving is sufficient for the photographer to 'circle' the squirrel.

However, if the squirrel were to be rotating on the spot, thus describing a circle with zero radius, the photographer could easily have no motion if we look from the squirrel's point of view, and so it would seem that a lack of relative motion is not sufficient to prevent circling.

The problem is that in order to look from the squirrel's point of view, we must use a rotating reference point to look at what is taking place. Imagine trying to plot the motion of a squirrel on a piece of paper, which spins around a pin in its centre at the same rate as the squirrel circles the tree. You know that you're moving the pencil around in a circle trying to draw the squirrel's path, but the paper keeps up with your pencil so that you end up with a single dot. Attempts to draw the path of the photographer would lead to a similar result, and it becomes apparent that although both characters are circling the tree, on this special piece of paper they simply appear to be standing on either side of the tree without moving. It is still possible that the photographer is circling the squirrel, but that the point of view we are using is cancelling out this circular motion as well as that of the characters circling the tree. Likewise, it is possible to end up looking at circular motion that isn't really there, as would be seen if we kept the pencil still whilst the paper rotated. Keeping the pencil still and watching the paper rotate produces a circle around the pin - does this mean that the pencil has circled the pin without moving? Does this mean that circling can happen irrespective of the relative and absolute motion of the participants? In the end we must accept that the photographer has circled the squirrel, as the way we think of circular motion demands that we must.

'We lay there without moving. But under us all moved' - Beckett, Krapp's Last Tape

Another squirrel who thinks a lot about his movements is Tufty, who has been used to teach UK children road safety since the 1950s. He starred in his own public information film of the 1970s, as you can see on the BBC News website.