Zeno's Paradox Content from the guide to life, the universe and everything 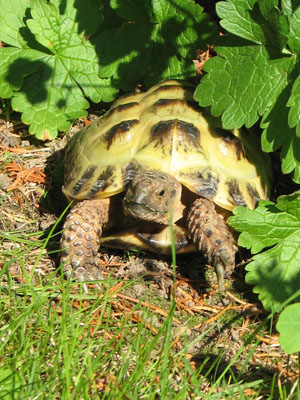 Zeno, an ancient Greek possibly too smart for his own good, developed a paradox. It postulated that motion is impossible because the moving object always has to cover half the distance. Since the number of halves is infinite and they become infinitely small, the moving object never really gets itself going.

Picture an arrow being fired at a target 16 yards away. Before it reaches the target, the arrow has to get to a point eight yards away, but before it gets to that point, the arrow has to get four yards away. Get it yet? If you don't, keep dividing the distance travelled by two. See how small the numbers get? Those numbers represent shorter distances travelled. After 12 of these permutations, the arrow is moving a little more than an eighth of an inch. And these divisions go on forever, so the arrow eventually moves so little that the change is virtually undetectable.

Assuming everyone is familiar with the story of the Tortoise and the Hare (if you're not, ask your parents what they were thinking), Zeno's paradox shows how the Hare never would have stood a chance had the tortoise been given a head start.

Once upon a time, Hare decided to race the other members of the animal kingdom. 'You're too fast!' they all said, 'We don't want to race you. We don't stand a chance.' Only one animal was willing to race, Tortoise. You see, he had read about Zeno's Paradox and knew that all he needed was a head start.
'You just want a head start? Fine!' snapped Hare. 'I'm ten times faster than you are, so you can start ten metres ahead of me.'
Tortoise started the race. After he was ten metres along, Hare started and caught up fast. When Hare got to the ten metre marker Tortoise was only at 11 metres, and when Hare got there Tortoise was at 11.1 meters, and when Hare got there Tortoise was at 11.11 meters. As hard as he ran, Hare couldn't pass the Tortoise! By the end of the race, Hare was just a tiny bit behind. Of course, the 'Fastest Animal' trophy couldn't be awarded because Tortoise was affected by Zeno's Paradox too. Neither one of them finished the race1.

By this time, you should see that Zeno's Paradox doesn't apply to the real world. For one thing, animals can't talk. If you've understood the previous material, you're probably ready to hear why Zeno's Paradox falls apart.

Motion is usually thought of as a distance travelled over time. Here's a group of useful formulae relating distance and time to speed:

Zeno's Paradox ignores the changes in time and therefore the changes in speed of the moving object. The arrow in the first example would be pretty fast, so even in a small amount of time it would go pretty far. In the example, however, the time is reduced to almost nothing and since anything multiplied by almost nothing equals almost nothing, the distance, of course, becomes very small. In real life, however, time keeps increasing - especially when you're having fun - and because of this, time multiplied by a speed gives a number, and motion occurs.

1The moral of this story is, of course, that anyone who accepts an unwinnable challenge has something up his sleeve.