Pond Life in the UK - an Introduction to a Microcosm Content from the guide to life, the universe and everything 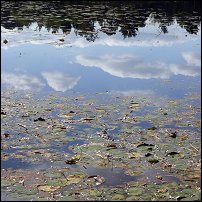 We live in a world where there is not a great deal to surprise us, nor many unexplored places. There is one, however, which we come across regularly and tend to ignore, and that is the world of the pond, puddle, or even damp ground. Many children take great delight in playing about in muddy puddles, catching tadpoles and finding mosquito larvae, and as one h2g2 Researcher recalls:

As a very lonely schoolboy, I became interested and got quite good at it. In fact, the school biology department found out and used to come and consult at weekends. It was quite an accolade as I wasn't much good at anything else.

It also created quite a stir, as apparently while at public school I was followed on several of my trips by the authorities - they couldn't work out what I was up to (had to be drugs or sex somewhere along the line). Looking back it was very funny.

So, as can be concluded, many adults sometimes forget the great joy, but also the scientific value, of investigating these occasionally forgotten small worlds. These places are veritable 'jungles', teeming with the strangest of creatures. Some use every kind of propulsion: from wiggling arms or legs, to tying their body in knots, to gliding, and even jets. And often the very same animals are equipped with all sorts of weapons: from plain biting jaws, to rasping conveyor belts of teeth, to jaws that can be projected from the body, to simple poisonous harpoons. Some can even turn their body inside out to feed!

But this incredible array of animal life that is so often left unnoticed can be so easy, and extremely enjoyable, to visit. When you next look into a dirty pool of water, don't just take in what you see on the surface. There's teeming life in there, starting at a microscopic level.

The simplest form of pond life is the humble amoeba. This creature can survive the most trying of conditions and, although consisting of only one cell, can exhibit a wide range of unusual and interesting behaviour. On the same scale as amoeba are the Dinoflagellates, tiny creatures that mostly move by rotating their tail at a rapid rate. The shapes and adaptations displayed by this group are literally out of this world - and would make any self-respecting designer go green with envy.

Going slightly larger are the Rotifers, otherwise known as Wheel Animalcules1. This is because there is a band of hairs at the entrance to the creatures' organs which undulate in a rhythmic fashion, producing the appearance (under the microscope) of a rotating wheel. These creatures are voracious carnivores, but the largest is only around 0.1mm long!

Some species of Rotifers build houses out of tiny pieces of grit, making very elegant tiny castles. Others are not so fussy; the majority have no covering at all. This group, like the Dinoflagellates, provides enough variations and adaptations to be a life study on its own.

Next in increasing size are the Tardigrades, or Bear Animalcules. These are truly strange creatures, named for their slight resemblance to a bear (well, it is very slight). Normally they have four pairs of legs, but some have three pairs. The legs have no joints, but they do have toes or claws. Their size ranges from 0.01mm to 1.5mm, and as such they are the first of our pond life genus which can actually be seen with the naked eye. Present in nearly every kind of water, they are most easily found in moss - from a pond, or even off a roof.

They feed mostly on bacteria, but, like many other creatures of this size, pretty much anything will do. They are able to survive in a vacuum and can tolerate a pressure of up to 6,000 atmospheres - which is more than the deepest trench of an ocean. Many creatures can survive droughts, but very few for up to ten years. Not only can the Tardigrade do this, but it can lower its water content to 0.01%. This is pretty unique in the animal kingdom. But there is one further aspect which no other animal has: every species of tardigrade has the same number of cells in its body.

We're not talking about the type that live in the sea, of course, but the minute specimens found in ponds. Some can be seen with the naked eye, as they can grow up to 2.5cm in length. Three main species are common to the UK. The main representative is the Hydra, a fascinating creature, although an increase freshwater jellyfish means it's not the only type to be found.

The Hydra is far more common than most of us assume. It is easily disturbed and simply turns itself into a brown blob of no significance if it feels threatened. The Hydra reproduces mainly by budding2 (but can also reproduce sexually, usually in the autumn). It feeds by means of tentacles which first grasp the prey then use tiny poisonous barbs to finish the job. The food object is then pulled in towards the mouth and slowly engulfed. In times of plenty, the Hydra bud more frequently, producing offspring that feed on their own while attached to the parent.

The jellyfish move by two main methods. The first is by standing on the head and looping. The other is by gliding through the water. Another little strange ability of the Hydra is that, if broken into several pieces, each one will become a fully formed Hydra (flatworms also exhibit this ability). Hydra are easy to keep (and cultivate). The only minor drawback is that they will only go for live food.

In 1880 the first freshwater jellyfish, Craspedacusta sowerbyi, were discovered. In the sea, jellyfish have a first stage which is fixed - not unlike the Hydra. The freshwater jellyfish is exactly the same, with a small polyp producing the jellyfish bell which then simply buds off - and swims away.

These creatures are tiny when first released - no more than 0.5mm in diameter - but later grow to as much as 2cm. Initially quite rare, with the only record of them in the England for many years being a pond near Exeter, they are now much more widespread - appearing in canals and reservoirs throughout the UK.

The Nematodes are a type of worm that is extremely common and often overlooked. However, it is probably one of the most numerous of any species of worm in the world. Some 80,000 having been identified, with as many as a million being projected as the final possible number of individual types. Being mostly parasitic, nearly every living creature - including plants - plays host to them at one time or another. The species most commonly found in ponds are very small and live mostly in the mud. Some grow to up to 5mm long, and they are easy enough to find due to their sheer number.

The most common representative of Platyhelminthes - the flatworms - is Polycela nigris, which is midnight black and anything up to 12mm long. Found in ponds, streams, and any body of water, it is completely flat. Its digestive system is a little unique in that, having no anus, everything has to go in and out the same way.

This is quite a large family of creatures which includes several parasitic species including the tape worm and liver fluke. Amongst the most interesting are the marine flat worms which can grow to not only a considerable size but also form many exotic shapes and colours - bright reds, blues and greens are common.

Members of the crab family, or Crustacea, are very prominent in ponds. The diversity of this family throughout nature is extraordinary, with some species so bizarre it is almost impossible to classify them. However, one characteristic holds true throughout the crustacean family: they all possess two pairs of antennae. In freshwater the most commonly found crustacean are Daphnia, Cyclops and Cypris.

Cypris are not good swimmers, and are found mostly in horse troughs and the like. Daphnia prefer warm ponds and puddles. Cyclops are found mainly in open water. In fact, relatives of Cyclops and Cypris are found in huge numbers in the sea, where they form a very important part of the food chain. The largest Cyprid was found in the Atlantic Ocean, and measured in at over 5mm.

Then there is the Hog Louse, Aselus, an aquatic wood louse or 'slater'. They don't get very big, but are very common. This family is interesting because they inhabit nearly anywhere damp or wet. On the sea shore, the sea slater (up to 60mm) is quite common. In the sea itself, huge numbers of a giant relative are found at great depths. This latter creature grows to some 30cm-plus - and could possibly be a food source for larger sea creatures.

Four species of the Freshwater Shrimp, Gammarus, are commonly found in the UK. They prefer mostly running water, and are closely related to saltwater species - providing an important source of fish food. Several larger members of the Crustacea family are found in the UK, but they are mainly river creatures, so not often found in ponds.

Two species of freshwater sponge are found in the UK: the pond sponge, Euspongilla lacustris, and the river sponge, Ephydatia fluviatalis. Sponges are a strange accumulation of individuals divided into specialist tasks. They therefore come somewhere between unicelled animals, such as amoeba, and multi-celled creatures. Their colour is normally greyish-green, but they may be completely green depending on the availability of light - as they are also colonised by chlorella4.

Sponges often perform the task of providing shelter for other creatures, in particular the fly Sisyra. Filtering large quantities of water, they require surroundings that are not only relatively free of floating sediment but also lime-free. Another interesting little aspect is the use of silica to form their interior structure - what might be referred to as a skeleton.

Above are some of the most common of the tiny creatures to be found in ponds. The next group of creatures to be discussed are the more familiar types found - insects and larger 'creepy-crawlies', as such. These are covered in Pond Life - the Larger Creatures.

1Little animals.2The offspring grow out of the body of the parent.3Asexual form of reproduction.4A type of green algae.