Orchids of the British Isles - Dactylorhiza Content from the guide to life, the universe and everything 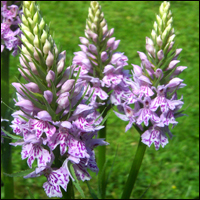 This genus of orchids is the largest in the British Isles, with ten species and ten sub-species. They are the most prolific of all the orchids, readily hybridise with each other and can easily be confused with other species in the genus. Their habitat ranges from roadside verges to dense marshland, to gardens and golf courses. All of these species of orchid have very similar characteristics.

For the purposes of this Entry, we will first of all discuss the characteristics of the leaves and flowers which are common to all orchids in the genus. Each species will then be briefly described individually.

The leaves of this genus are all long and pointed. Some have deep purple/brown spots and dashes, while others are plain green, and they can be narrow or broad. A few varieties have a hooded tip to their leaves. Some have clasping stem leaves1 at intervals along the flowering stem. The number of leaves varies from species to species, ranging from four up to nine.

The small and dense flowers of the Dactylorhiza genus are quite complex. The two outer sepals are held out either side of the hood, while the third outer sepal forms a spur, which points away from the flower. The hood is made up of two inner petals, which can vary in size from species to species. The lip is three-lobed and points downwards. In some species the lip is wide and flat, like a platform, while others have a narrow elongated lip. Flower numbers vary a lot, ranging from three up to 150. The colour spectrum isn't wide with this group, shades of pink and lilac being predominant; though white forms of these orchids can also be found. Aside from the white forms, all flowers of these species are marked with lines, spots and runways to tempt pollinators.

Some seed catalogues occasionally offer seed from the spotted heath orchid and common spotted orchid. Both of these orchids will grow in gardens, providing the conditions are right and there is the specific mycorrhizal fungi present in the soil.

This orchid is the most widespread of all the Dactylorhiza species, and there are colonies all over the British Isles. Having said that, it is still under threat. Most nature reserves across the UK that contain orchids regularly carry out surveys to see how their populations are thriving. In 2007 at a nature reserve in Nottingham, several common spotted orchids were dug up and taken. This was not the first time orchids had been stolen from this site.

The common spotted orchid comes in three shades of flower colour. A white form, which has no markings on the flowers or leaves; a lilac form, where the leaves have dark purple/brown lines and blotches and the flowers are lilac with deep pink markings; and finally a white form, with purple markings on its flowers and spotted leaves. They all grow up to 70cm and can carry as many as 150 flowers per spike. They have numerous leaves at the base and up to five clasping stem leaves.

There are three sub-species of this orchid. There is a white sub-species Dactylorhiza okellyi which has no markings on its flowers or leaves. Dactylorhiza rhodochila has deep reddish-purple flowers, and its leaves are so heavily spotted that in some cases, the whole leaf is a dark brown colour. Finally, Dactylorhiza hybridenses is a small plant only growing to 15cm in height. Its leaves are delicately marked, and it is mostly found in the Western Isles of Scotland, where it thrives.

This orchid grows up to 40cm high. It has between four and eight leaves, which are lightly marked with spots and circles. The flowers come in two shades of colour - white and lilac with deep pink veining. There can be up to 50 flowers per spike, but there are usually around 20. The lip of this species is large and platform-like. It's not uncommon to see both white and lilac varieties growing in the same area. They like to grow in clumps where the soil is acidic. They mostly inhabit areas of Scotland, Wales, Ireland and Cornwall, with a few dotted around the rest of the country.

Pollination has been recorded by bees and butterflies, though most of it is done by bristle flies and another fly, Ptychoptera contaminata.

This is a robust orchid, with a strong thick flower stem and clasping stem leaves. It can grow up to 35cm and bear up to 30 flowers. The leaves have hooked tips with no markings, and are wide and deeply veined. The flowers are pale pink, with deep pink markings. The lip is elongated and narrow, with a pattern of swirls and loops leading to the centre of the flower.

This orchid likes to grow in fens and marshes, also in wet meadows where the soil is alkaline. The early marsh orchid and its sub-species are still in decline, draining of wet meadows and marshes being the main cause.

There are four sub-species of the early marsh orchid. Sub-species Purchella has rich mauve flowers and prefers acid bogs and marshes to grow in. It was recently discovered in the Lee Valley, Hertfordshire, where it has colonised fly-ash tips. Another sub-species, coccinea, with its flowers of intense brick-red is unmistakable, as it is the only red flowering orchid in the British Isles. This orchid grows in lowland habitats such as coastal grassland or in damp dune slacks. There are large colonies in Anglesey and along the east coast of Scotland. Sub-species Ochroleuca has pale yellow flowers, with the lip being flushed with a darker yellow. This orchid was first recorded in Norfolk in 1936, growing on calcareous2 fens. It is now on the verge of extinction in Britain, due to the lowering of the water table. Finally, sub-species cruenta is the only one of the sub-species with spotted leaves. The flowers are purple, with darker purple lines and spots. This orchid is only found in one or two locations in Ireland, on grassland which is damp all year round and at the margins of seasonal lakes.

The red-tailed bumblebee is a regular pollinator of the sub-species of the early marsh orchid. No other pollinators have been recorded.

The southern marsh orchid is a sturdy plant, reaching up to 70cm in height. The leaves are broad and long, with no markings.

The flower spike is large and can carry up to 100 flowers. The flowers can vary in colour from plant to plant, ranging from lilac to dark mauve, with deeper coloured markings. The lip is long and wide, with a paler central zone. The spur of this orchid is much longer than the other Dactylorhiza species, and often curves downwards.

As the name might suggest, its habitat is mostly the southern half of Britain, though it has spread as far north as Yorkshire. It has been seen to inhabit a wide range of areas and is tolerant of most soil conditions, except truly acidic soil. It can be found growing in marshland, fens and on wet grassland, but is equally at home on a roadside verge.

A lot of the habitat of this orchid has disappeared over the years, mainly due to draining of wetlands. However, this is a persistent orchid and has recently reappeared in an old Sussex field 14 years after it was ploughed. There are no other colonies of this species within a 15-mile radius, which suggests the seeds have lain dormant for over a decade.

There are no records to determine which, if any, insect pollinates this orchid. It does reproduce successfully from seed and vegetatively.

Both species prefer damp conditions, often dune slacks and wet meadows. Purpurella can grow at altitudes of 600m, while majaliformis will only grow within 100m of the sea.

There is no evidence that these orchids are pollinated by any particular insect.

The western marsh orchid is fairly widespread across Europe, but in the British Isles it is only found in Ireland. It is a small plant, normally growing to around 20cm in height, but can reach up to 35cm. The leaves are broad and extend up the flowering stem of the plant. They have no markings and are slightly hooded at the tip.

The flowers of this orchid are large and deep pinkish-lilac in colour, with up to 40 flowers on a spike. The lip has three distinct lobes and is slightly reflexed, making the centre of the lip stand out. It has purple lines and spots leading up to the base of the lip, with a spur that is wide and flat. This orchid likes to grow in marshes, fen and wet meadows, and occasionally it is found in dune slacks.

There are two sub-species. Scotica is only found in the Outer Hebrides. This orchid only reaches to 15cm, with large heavily marked leaves and deep magenta flowers. Sub-species cambrensis is of doubtful provenance. With narrower more pointed leaves and a tall dense flower spike, it is thought that it could be closer related to the northern marsh orchid. The flowers are pale mauve and lightly marked, with a diamond shaped lip, like the northern marsh orchid.

This orchid is very dainty; its leaves are long and narrow, with no markings. The flowers are large, with only between seven and 12 per spike. The colour can range from pale lilac to deep mauve. The lip of the flower is narrow, with a central lobe forming a point. It is marked with a series of fine lines and dots. The spur is cone-shaped and points downwards, with the two side sepals being much longer than in other Dactylorhiza species.

This orchid is scarce, inhabiting just a few small areas around the British Isles. It likes to grow in marshes and fens, particularly at the edge of reed beds. Loss of habitat is one of the reasons this orchid is so scarce. Several populations have been lost in East Anglia, as a result of the lowering of the water table.

This orchid was first discovered in Scotland in 1967. It was first thought to be another form of western marsh orchid or narrow-leaved marsh orchid. It wasn't until 1988 that the mystery was solved. This species originates from Scandinavia, and is also found at the base of the Alps mountain range around France, Italy and Switzerland.

The Lapland marsh orchid is found in a few places in Scotland, including the Isle of Skye, where it likes to grow in acidic soil, alongside black bog-rush and common cutterwort. It is also found in parts of Northern Ireland on the Garron Plateau, Co Antrim. It prefers low altitudes at the base of hillsides, where the soil is acidic and moist all year round. The populations are small, but seem to be thriving.

This orchid can grow up to 24cm, with pale green leaves covered in dark rings and blotches; the leaves may also have purple edges.

The flowers are large, ranging from three to 12 per spike, lilac in colour with deep magenta markings. The outer sepals are erect and held out like a pair of birds wings. The lip is three lobed and heavily marked with magenta lines, the centre lobe being longer and reflexed at the tip. The spur is broad and sits along the stem of the flower.

1Leaves that grow out from the flower stem.2Water or soil containing calcium - chalk or lime.