North Yorkshire Content from the guide to life, the universe and everything 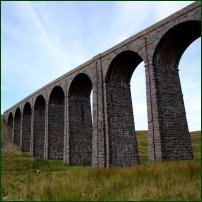 North Yorkshire is the largest county in England, with an area of over 3,200 square miles (that's 8,300km2)1, though that's peanuts compared to the old county of Yorkshire, which weighed in at almost 6,046 square miles (15,659km2). Two national parks lie almost entirely within its borders, namely the Yorkshire Dales and the North York Moors, each of which contains a US military base.

The county of North Yorkshire came into being in 1974, formed out of most of the North Riding and a bit of the West Riding. It still galls Yorkshiremen that parts of God's own county (as Yorkshire is known) were given away at this time. Some of the North Riding went to the newly created and now defunct Cleveland2, some to County Durham, and some to the old enemies, Lancashire. In 1996, the City of York became a unitary authority, though for most purposes it still counts as part of North Yorkshire.

The county is mostly rural with plenty of moorland on which sheep have been grazed and grouse shot for centuries. Yorkshiremen are traditionally pictured as miserly, a stereotype somewhat backed up by the old Yorkshire saying, 'If tha ever does owt for nowt, do it for thissen'3. Be that as it may, there's an old-fashioned pride in Yorkshire, its cricket team and, most importantly, its beer. North Yorkshire may not have any massive breweries pumping out ale and lager by the wagonload, but it has a number of well-regarded small brewers, some of which will be mentioned later.

North Yorkshire's countryside makes walking a great attraction, and there are several long-distance footpaths, including the famous Pennine Way, not to mention numerous public rights of way and a good deal of open-access land. Less environmentally friendly but equally enjoyable is a driving tour.

The term 'dales' refers to the valleys (rather than their corresponding hills) that stretch across central northern England, from the border of Lancashire in the west to the flat Vale of York in the east. The Yorkshire Dales National Park was established in 1954 and covers 680 square miles (1,762km2), including a large area of the 'backbone of England': The Pennines. Its highest peak is Whernside, which stands at 2,416ft (736m) above sea level. The west of the Dales is made up of a number of such typically Pennine hills.

The Dales are home to RAF Menwith Hill, part of the American Echelon network that spies on electronic communications. It often sees protests by those who don't like being spied on, or by those who just don't like the USA.

The classic Dales landscape is rolling hills with sheep grazing in drystone walled-fields. Breeding horses is also popular, as is keeping dairy herds - the most notable instance being at the Wensleydale Creamery, which is endorsed by cheese-munching Wallace of animated duo Wallace and Gromit. The animals helped make the Dales famous by giving literary and televisual vet James Herriot something to stick his hand into in between driving around admiring the scenery. The actual James Herriot (or rather James Alfred Wight, as he was known when not writing books) practised in Thirsk in the Vale of York4.

Brewing is another noteworthy profession, as real ale holds an esteemed position in Dales culture. There are a large number of small breweries and significant, large-scale operations in Masham, home to both the Theakston and Black Sheep breweries. The Copper Dragon Brewery in Skipton is a notable up-and-coming youngster, being founded in 2002.

For the visiting historian, the Dales have a number of interesting old buildings, including Skipton, Richmond and Middleham Castles. Bolton Abbey is one of several gothic buildings standing at almost 1,000 years old. Looking further back in time, the Dales boast some ancient circles, the Thornborough Henges, and a legendary village that was drowned for its wickedness, Simmerdale. Other attractions include the Settle Carlisle Railway, The Embsay and Bolton Abbey Steam Railway, Aysgarth Falls, The Valley of Desolation, The Dales Countryside Museum, The Forbidden Corner and a plethora of other small museums, historical sites and natural marvels.

To the north-east of York there is a large area of mainly heather-covered upland, which stands high over the Vale of York to its west. Various rivers push their ways between the higher ground as they mostly head south towards the River Derwent, producing steep-sided dales. The odd man out here is the River Esk, which runs through the north of the moors from west to east and flows out to sea at Whitby.

The North York Moors National Park was created in 1952, and in 1969 the Cleveland Way - a long-distance footpath running from Filey up the east coast, across the north of the park and down the west side to Helmsley - was established. As with the Dales, you can find a lot of open-access land.

Fylingdales Moor contains a early warning radar base. Unlike Menwith Hill it sees few protests, the most vigorous probably being when the four iconic 'golf ball' buildings were demolished and replaced by a single 'pyramid'5.

During the heyday of railways there were numerous lines across the Moors, but these gradually dwindled. In the 1960s the infamous Dr Beeching closed two of the three remaining lines: the coastal railway from Whitby to Scarborough and the line from Grosmont to Malton6.

A number of people said they weren't going to stand for this sort of thing, and with a little help from the North Riding County Council they got together enough money and people to re-open the line from Grosmont as far as Pickering (a little to the north of Malton, so no connection to the York-Scarborough line) in 1975. Steam trains and the occasional diesel run several times a day.

You may well have seen trains running on this line in the TV show Heartbeat or the Harry Potter films.

If the railway continued the few miles further through to Malton, as it did before Beeching got a hold of it, it would go straight past the small village of Kirby Misperton. It could then serve the useful function of easing the congestion caused by cars trying to get to the theme park and zoo known as Flamingo Land.

The theme park is the usual sort of thing: roller coasters, log flumes, river rides and the rest. Of course, in most theme parks you don't get a pride of lions staring at you as you float by. When you get bored with the rides you can wander round and look at the animals in their fields and ponds. As you might guess, there's an impressive stand of flamingos7.

Harrogate was one of those spa towns where people used to go to bathe in sulphurous water and stick blobs of hot mud on their skins. The Victorians were particularly keen on this and many of the buildings date from their time, but the mineral springs of Harrogate were in use from the late 16th Century until after the First World War.

The town is also justly admired for The Stray, a long stretch of well-tended common land near the centre, meant to allow all access to the springs, but these days treated like a large park.

An old cathedral city, Ripon's place in the Church of England has recently been challenged. First the diocese was renamed as 'Ripon and Leeds', and then the Bishop himself moved down to Leeds. Ripon has a lot of historical buildings and Fountains Abbey a few miles to the south-west is the best-preserved Cistercian abbey in Britain (not that it offers much in the way of stiff competition - it is still lacking most of its roofs and several walls).

You may have heard of the battle between Nottinghamshire and South Yorkshire to be recognised as the home of Robin Hood, but you've probably never thought of the North Yorkshire coast as his home. Well it wasn't. Exactly where the name Robin Hood's Bay came from is unknown, but the town has certainly seen its fair share of outlaws, mostly smugglers and mostly in the 18th Century.

Scarborough, along with many north-east coastal towns, hit the big time in the Victorian era, when doctors recommended a walk on a cold, windy beach as the cure for most things. Since then it has declined in popularity, as modern holidaymakers are less concerned about curing their ills than with turning themselves brown.

If you get bored of the dilapidated Victorian grandeur and playing chicken with the waves that break over the promenade, you can always visit Scarborough Castle for a bit of history.

The city of York has been around for a very long time. It was founded as Eboracum in 71 AD by the Romans, who wanted to lord it over the recently conquered Celtic tribes, the Brigantes. Since then it has been known as Eoferwic to the Anglo-Saxons and Jorvik to the Vikings.

York has many old buildings, the most famous of which is the Cathedral and Metropolitical Church of Saint Peter, better known as York Minster. Much of the old city walls still stand and visitors can walk along them. Little, however, remains of York Castle except for the keep known as Clifford's Tower.

Whitby lies at the mouth of the Esk and is well known for its ruined abbey, maritime heritage and vampire connections. Whitby Abbey was originally founded in the 7th Century, but has been destroyed a couple of times - the nearby Saint Mary's Church, built in 1110, has easily outlasted it.

1Including the City of York, but excluding Middlesbrough and Redcar and Cleveland - see below.2Though the name Cleveland dates back to Viking times, it appears in names such as the Cleveland Hills and Carlton-in-Cleveland (neither of which, confusingly, are in the county of Cleveland.3'If you ever do anything for nothing, do it for yourself.4Between the Dales and the North York Moors.5It's not really a pyramid because it doesn't come to a point at the top. Also it only has three sides.6The third line, running from Middlesbrough to Whitby via Eskdale, is still extant, though Beeching did for a branch that ran to the town of Guisborough.7Apparently that's the collective noun, although the internet also suggests 'a flamboyance of flamingos'. Does anyone actually use these phrases?